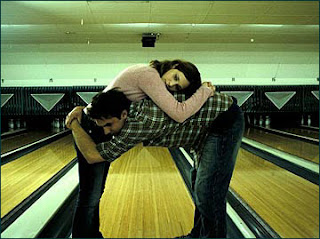 So I recommended a movie that I love to girl I'm friends with. We got into a movie discussion through Facebook, and this was her response:

"I saw All the Real Girls last weekend. Hated that too! I didn't like that the opening just jumped right into their relationship like that. And when it came time for him to be portrayed as a player guy, I already liked him and couldn't see that in his character at all. But I thought Zooey Deschanel (?) did a great job. I always like her."

As for All the Real Girls...it is a masterpiece. If I had to make a list of the top ten films since 2000, this film would be 1 or 2. As for your first complaint ("the opening just jumped right into their relationship..."), I think this could possibly be a reference to films of the 70s by directors like Ingmar Bergman (Scenes from a Marriage), Woody Allen (Annie Hall and Manhattan), and John Cassavettes (Faces and A Woman Under the Influence), in which relationships are dissected in not always a linear fashion. It is no surprise that All the Real Girls just happened to be produced by long-time Woody Allen producer Jean Doumanian. I honestly think that having that sweet introduction scene strengthens the characters. The director, David Gordon Green, is more interested in images than straight-forward narration. The first scene and the scene in the bowling alley where the two hold each other, talk, and then Paul dances with happiness are meant to mirror each other, and both scenes are filmed with no camera movement. Green just watches them communicate quietly with mostly body language. The sign of a born film director.

It is discussed in great length early on in the film that Paul is a ladies' man. This is seen in the character of the older brother when he so strongly objects to the relationship. The thing that should be understood about Paul is that he inhabits a small, Southern town very similar to the one I grew up in (All the Real Girls is set and was filmed near Asheville, NC, which is about 1 1/2 hours from my hometown). That being said, it is not hard to be a ladies' man in such a small town, and the point is not that he IS a player, but once WAS because of small town boredom. And it becomes obvious that falling in love with Noel changed his life and made him regret how he treated the previous girls.

I identify with All the Real Girls because (1) it's a Southern film about the South and Southerners, (2) it does that more accurately than any movie I have seen, (3) Paul's mother, played excellently by Patricia Clarkson, works as a clown for parties (my mother used to do that too), (4) it is about true love and how we (young men) idealize women and love (with Noel it becomes more than just sex), and (5) it has the most beautiful closing lines and scenery of just about any movie I've seen, which is as follows:

Paul and his dog sit by the river, and we see images of the Appalachian landscape, Paul, his truck, and the dog. And then Paul gives the dog a pep talk about swimming: "...I mean, if there's times in the world when it's time to take a chance, it's time right now to take a chance. What's this? Water. Get in it. It's just water. Listen, brother. This river goes two ways. That way, and THAT way. You know what I'm sayin'? It's like a puzzle with pans, if you think about it."
That was written earlier. Today, I would like to give any readers of this a strong encouragement to see ALL of David Gordon Green's films, especially All the Real Girls.  It is one of the best love stories I have seen in any film.