The Flag of My Father: A Review of Oliver Stone's W. 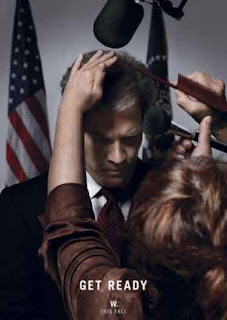 Oliver Stone's W. exists in a strange place and time. Here we are, three weeks from election day, and a biopic of a President still in office has been released. An educated man might think that this is some sort of ploy for the left by reinforcing the fact that, dare I say it, the war in Iraq is one of the biggest mistakes our great country has ever made. However, Oliver Stone doesn't push that agenda and his second presidential biopic (following 1995's great Nixon) is not against George W. Bush but is simply the sympathetic story of a tragically-flawed, quintessential "silver spoon" who spent a lot of years figuring out what was right for him, finally found it in God and politics, and transcended his over-bearing father's expectations to become Governor of Texas and the 43rd President of the United States.

The basic set-up of the film is this: George W. Bush (played by Josh Brolin) and the usual suspects circa '02/'03 (Cheney, Rumsfeld, Condy, "Genius boy" Karl Rove, "Brother" George Tenet, and Colin Powell) discuss the plans for invading Iraq. Meanwhile, W's past is exposed chronologically. We see him at Yale drinking Jack through a funnel, then meandering around, drinking, wrecking cars, losing jobs. He meets Laura, falls in love, loses bad for a U.S. House seat in Texas, quits drinking, finds God...All things you've heard or read about the Bush of the '60s and '70s. Then Stone begins to show us what makes W tick through several important relationships.

First, Stone will lead us to believe that W's greatest flaw was that he always wanted to prove his father that he could be better than his younger brother, Jeb, at least in his father's eyes. He is constantly trying to prove himself to H.W. a.k.a. Poppy. Jeb Bush has recently come out and said that this is all "hooey," but it remains unknown whether any of the Bush's have actually seen the film. The second and third important relationships to W come packaged together almost. He meets liberal Laura Welch (played by the beautiful Elizabeth Banks), and they fall in love instantly. She becomes the voice of reason, his conscience, and the first step in his becoming "born again." In a way, it seems to me that Laura single handedly made him a better man, a man actually willing to find God and work his way into his father's footsteps.

Perhaps the most frightening thing about this film is that W is portrayed as a man who had the swagger and the face of a President but not the knowledge or the ability to properly reveal his ideas through words. Stone sneaks in a lot of the famous blunders ("Fool me once...," "Is our children learning?," etc.) We see him, as President, surrounded by decision makers Karl Rove (Toby Jones) and Dick Cheney (Richard Dreyfuss). There is no way to know who said what and when it was said, but it becomes clear that there were many reasons, some good, most bad, for America to invade Iraq. And I was astounded during a scene where Dreyfuss as Cheney straight makes the case that we should invade Iraq because of oil and strategic positioning on Iran. "Empire! Mr. President!" he claims in a subdued manner. I truly believe that Rove and Cheney truly were the men that gave W his war. That war that he believed his father never finished, and that we still fight everyday.

The reason I admire this film is this: the performances across the board are magnificent. Josh Brolin, Richard Dreyfuss, and Jeffrey Wright (as Colin Powell) should all get Oscar nominations. For those of you who think all of Oliver Stone's films are Kennedy Assassination Conspiracy Theories, think again. There is nothing like that in here, and this is coming from a liberal democrat who would never consider voting for George W. Bush for anything. He does seem like a fun guy, and I started to care about him as a man...a guy I would like to have a beer with. You should see this film because it is unusually funny like a bad joke told too soon but is also interesting, fascinating, and kind of sad. It is also a truly American story about a good-ole boy who lived big and had "God on his side."

Note: After the movie there was a woman outside the theater with a sign that read, "'W' is an American Hero - NOT A JOKE." I read this as I drove past then turned around and asked her if she'd seen the movie. She said she'd seen the trailer, and it made him look like a joke. Then she said, "I love the man!" I said she should see the movie before bringing signs out and drove off.