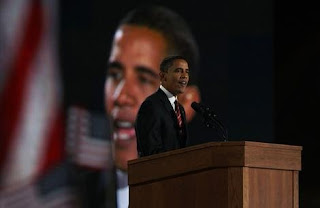 I am a Democrat who voted for Barack Obama, a man who so many of my friends have doubted, have slandered, have been out right mean towards. I write this note in the hope that we can, all of us together, bring this country back to peace and prosperity in such desperate times alongside a great, natural born leader.

John McCain's concession speech moved me to tears last night. John McCain is a strong, dedicated, brilliant senator as well, and he deserves my utmost respect. I admit that at one point years ago I said that I would consider voting for a Republican like John McCain, but he never once sparked that in me through the course of this campaign. Last night, the man straight poured his heart out, finally, gracefully declaring that, "In a contest as long and difficult as this campaign has been, Obama's success alone commands my respect for his ability and perseverance. But that he managed to do so by inspiring the hopes of so many millions of Americans who had once wrongly believed that they had little at stake or little influence in the election of an American president is something I deeply admire and commend him for achieving. This is an historic election, and I recognize the special significance it has for African-Americans and for the special pride that must be theirs tonight. I've always believed that America offers opportunities to all who have the industry and will to seize it. Senator Obama believes that, too." I applaud John McCain for his selflessness, and his ability to concede in such a beautiful and graceful manner. I only wish that Sen. McCain had given me that feeling sooner. John McCain, a man that could've been President, finally spoke like a President last night. His major downfall was that he didn't inspire that kind of hope the whole time.

Barack Obama was not my initial choice during the Democratic Primaries. However, I sensed in his character and his ability to reach the people, even four years ago during his first U.S. Senate race, that he is the type of leader this country desires and deserves right now. This year marks the second Presidential race that I have been able to vote in, and it is the first time that I have won. I cannot express the joy I felt last night when the announcement was made that a strong, dedicated African-American senator would become the President of the United States. In my home last night, among several of my closest friends, we joined the celebrations. There were high-fives, hugs, laughter, and even tears. I called my baby sister in Jacksonville, Florida, and shared the joy with her. I was ecstatic. My country, after eight years of fear, has made the choice of hope for something better, something different, something bold. And my heart pounded with joy and my eyes filled with tears as I listened to President-Elect Obama speak these heartfelt words so clearly and intensely after running the greatest Presidential campaign in history. The following words prove why this great man got my vote. The following words prove his dedication to unifying this great land that I love.

"In this country, we rise or fall as one nation, as one people. Let's resist the temptation to fall back on the same partisanship and pettiness and immaturity that has poisoned our politics for so long.

"Let's remember that it was a man from this state who first carried the banner of the Republican Party to the White House, a party founded on the values of self-reliance and individual liberty and national unity.

"Those are values that we all share. And while the Democratic Party has won a great victory tonight, we do so with a measure of humility and determination to heal the divides that have held back our progress.

"As Lincoln said to a nation far more divided than ours, we are not enemies but friends. Though passion may have strained, it must not break our bonds of affection.

"And to those Americans whose support I have yet to earn, I may not have won your vote tonight, but I hear your voices. I need your help. And I will be your president, too.

"And to all those watching tonight from beyond our shores, from parliaments and palaces, to those who are huddled around radios in the forgotten corners of the world, our stories are singular, but our destiny is shared, and a new dawn of American leadership is at hand.

"To those -- to those who would tear the world down: We will defeat you. To those who seek peace and security: We support you. And to all those who have wondered if America's beacon still burns as bright: Tonight we proved once more that the true strength of our nation comes not from the might of our arms or the scale of our wealth, but from the enduring power of our ideals: democracy, liberty, opportunity and unyielding hope.

"That's the true genius of America: that America can change. Our union can be perfected. What we've already achieved gives us hope for what we can and must achieve tomorrow.

"This election had many firsts and many stories that will be told for generations. But one that's on my mind tonight's about a woman who cast her ballot in Atlanta. She's a lot like the millions of others who stood in line to make their voice heard in this election except for one thing: Ann Nixon Cooper is 106 years old.

"She was born just a generation past slavery; a time when there were no cars on the road or planes in the sky; when someone like her couldn't vote for two reasons -- because she was a woman and because of the color of her skin.

"And tonight, I think about all that she's seen throughout her century in America -- the heartache and the hope; the struggle and the progress; the times we were told that we can't, and the people who pressed on with that American creed: Yes we can.

"At a time when women's voices were silenced and their hopes dismissed, she lived to see them stand up and speak out and reach for the ballot. Yes we can.

"When there was despair in the dust bowl and depression across the land, she saw a nation conquer fear itself with a New Deal, new jobs, a new sense of common purpose. Yes we can.

"When the bombs fell on our harbor and tyranny threatened the world, she was there to witness a generation rise to greatness and a democracy was saved. Yes we can.

"She was there for the buses in Montgomery, the hoses in Birmingham, a bridge in Selma, and a preacher from Atlanta who told a people that "We Shall Overcome." Yes we can.

"A man touched down on the moon, a wall came down in Berlin, a world was connected by our own science and imagination.

"And this year, in this election, she touched her finger to a screen, and cast her vote, because after 106 years in America, through the best of times and the darkest of hours, she knows how America can change.

"America, we have come so far. We have seen so much. But there is so much more to do. So tonight, let us ask ourselves -- if our children should live to see the next century; if my daughters should be so lucky to live as long as Ann Nixon Cooper, what change will they see? What progress will we have made?

"This is our time, to put our people back to work and open doors of opportunity for our kids; to restore prosperity and promote the cause of peace; to reclaim the American dream and reaffirm that fundamental truth, that, out of many, we are one; that while we breathe, we hope. And where we are met with cynicism and doubts and those who tell us that we can't, we will respond with that timeless creed that sums up the spirit of a people: Yes, we can.

"Thank you. God bless you. And may God bless the United States of America!"