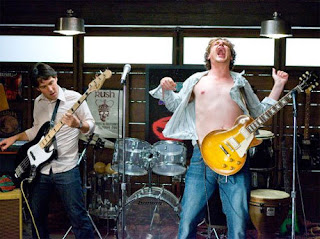 Paul Rudd and Jason Segel are two of the funniest guys in movies. To put them together is a masterstroke of casting. I love them, man. I want to be friends with them.

I can't begin to describe how happy I am after seeing I Love You, Man. I'm smiling from ear to ear. It's about a guy named Peter, played by Paul Rudd, who is a great guy. He's getting married, you see, to a beautiful girl named Zooey, played by the amazing Rashida Jones. The problem is that he has no guy friends, doesn't really know how to have guy friends, so the hunt begins. He is incredibly awkward, and Mr. Rudd plays this to perfection.

Peter finds Sydney, played by the great Jason Segel. He is the kind of guy who has that devil-may-care attitude that some guys have. He observes, he seeks truth, he's a bit lacking in tact, and it is very funny. And then there's Rush, bass guitar, leprechauns, Lou Ferrigno playing himself, billboards and some of the funniest dialogue I've heard in quite a while. Probably since last year's Forgetting Sarah Marshall, which stars and was written by Mr. Segel himself. To see him and Paul Rudd riffing off of each other is nothing short of spectacular. They employ comic timing that is of epic proportions.

During this movie, I found myself laughing fifteen minutes at a time with maybe two minute breaks in between. I did not stop, and everybody else in there felt the same. It is a GREAT comedy. I loved every minute of it.