Tom Cruise: A Great Actor No Matter What They Say 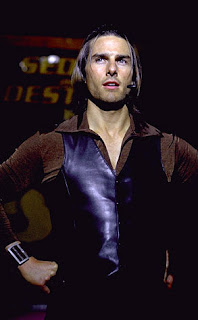 I'll start by deconstructing this list, which I don't care for too much. However, my list will certainly overlap somewhat. War of the Worlds, while decent, does not give us Cruise's skill. Tropic Thunder featured a different and unexpected Cruise but is not worthy of a list. It's a cameo. I realize that the people from Time were going chronologically, but I don't like that. I'm going by rank of ten best roles...my opinion-style.
First, Tom Cruise has only made one bad movie in my opinion...Cocktail. I just never got into that one. It's too silly-80s for my taste and only highlights his good looks and swagger, which was displayed in a far-better silly-80s blockbuster known as Top Gun. I am lucky enough to have recently re-watched this 1986 Tony Scott extravaganza and, man, does it hold up. It is a blast to watch and is definitely the movie that pushed Cruise into major Hollywood player stature.
Then the man went on to become a real actor. He showed us in Rainman that he could act with the likes of Dustin Hoffman in a great brotherly road movie. He played the paralyzed real-life Vietnam Vet Ron Kovic in Oliver Stone's incredibly dramatic Born on the Fourth of July. And he made these two movies within a two-year span and earned his first Oscar Nomination for the latter and should have won. He has continued to prove his skills on through the 90s and 2000s working with actors like Jack Nicholson in Rob Reiner's A Few Good Men and with directors like Cameron Crowe (Jerry Maguire, Vanilla Sky), Ron Howard (Far and Away), Michael Mann (Collateral), Paul Thomas Anderson (Magnolia), and The Stanley Kubrick (Eyes Wide Shut). Say what you will about his utterly stupid Personal Life, but the man can act and he can entertain and he will continue to do so for a long time.
My number one choice for the best Tom Cruise role is to be awarded to Paul Thomas Anderson's 1999 masterpiece Magnolia for which he received his third Oscar Nomination. He plays Frank "T.J" Mackey, the estranged son of a wealthy television executive (Jason Robards), who makes a living as a sleazy motivational speaker and creator of "Seduce and Destroy," a program that produces a step-by-step plan showing men how to get women into bed. He plays it with great seriousness and hilarious profanity. And he steals the show from the incredible ensemble cast including John C. Reilly, Phillip Seymour Hoffman, William H. Macy, Julianne Moore, and the late-great Jason Robards. He lays it all on the line in this one and is, at once, the comic-relief and the best dramatic performance during the raining of frogs that is the end of this great film.
Here is my Tom Cruise top ten:
1. Magnolia (Paul Thomas Anderson, 1999)
In which he sleazily makes you cry.
2. Vanilla Sky (Cameron Crowe, 2001)
In which he is as confused as you.
3. Born on the Fourth of July (Oliver Stone, 1989)
In which he's not just a pretty face.
4. A Few Good Men (Rob Reiner, 1992)
In which he shows Jack he "can handle the truth."
5. Collateral (Michael Mann, 2004)
In which he is truly a villain.
6. Jerry Maguire (Cameron Crowe, 1996)
In which he is down-trodden, "shows you the money," and "completes you."
7. Risky Business (Paul Brickman, 1983)
In which he falls for a hooker and realizes the sometimes you just have to say, "what the fuck."
8. Rainman (Barry Levinson, 1988)
In which he finds out he has an older brother and becomes all the better for it.
9. Minority Report (Steven Spielberg, 2002)
In which he does some action again...Spielberg-style.
10. Top Gun (Tony Scott, 1986)
In which he sings, "You never close your eyes anymore when I kiss your li-i-ips..."