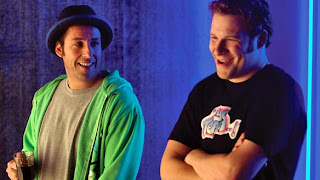 I believe that Judd Apatow is capable of great things. He could make one of the best movies ever someday. His latest movie, Funny People, just misses greatness. However, it is one of the best comedies about comedy there has ever been.
Adam Sandler, doing the best acting he's ever done, plays George Simmons, a very rich and famous comedian and movie star. He is also very lonely and is only made more when he finds out he has a terminal illness. The opening scenes of this movie are filmed beautifully. Apatow you can see, with camera great Janusz Kaminski as DP, is starting to gain a little style with this film. I was drawn in immediately to this story and very touched after the first five minutes.
The movie continues its greatness upon introducing Ira Wright (Seth Rogen), an upstart stand-up comedian. He and his roommates (Jason Schwartzman and Jonah Hill) all work in comedy and are all working on finding that big break. Ira meets George Simmons, who kinda likes his stuff. He takes the younger under his wing as a writer and assistant. And then George and Ira are friends, headliner and opening act. Apart from their age, the two new friends are different. George is selfish, never in love, insensitive, uses his fame to sleep around. Ira is a guy like me and like Judd Apatow (I recently heard him in a Fresh Air interview). He is sensitive and shy around girls. He is afraid to even talk to the cute girl comedian (Aubrey Plaza) from across the street that he likes. Just as he is afraid to try any moves on this groupie George brings home for him after a gig. The differences between these two comics, especially with the ways of women, are at the center of this film and are the greatness of it along with the funniest stand-up comedy bits I've ever heard.
Funny People falters, though, in its third act. George and Ira pay a visit to an old friend from George's past, and, while still a little funny and incredibly meaningful, the plot just slows down way too much. I think Apatow was trying to create a sort-of uncomfortable feeling in both the main characters and the audience, which sort of works and for which I applaud his originality. But, in the end, at nearly two-and-a-half hours, the movie plays just a little too long.
You should decide for yourself though. Don't let the running time deter you. This movie is as funny as the title suggests, is often beautifully touching, and has a heavy load of comedic greatness, and I'm sure I will watch it again and again. In fact, the first ninety minutes is the best movie I've seen this year. Adam Sandler is at the top of his game as an actor in this one, and Seth Rogen and the discussion of Wilco and the struggles he has with this girl immediately connected with me. I've felt this way before. You'll know what I mean. Even though it didn't quite go the distance for me in the end, I can't wait to see what Judd Apatow does next.
***1/2 out of ****