Basterds: An Email to a Friend in Middle Tennessee 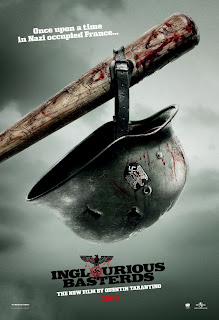 I went to see Inglourious Basterds on Sunday with Mayes and Morrow. So freakin' awesome! I was hooked from the first shot. I think it's about as perfect a movie as there can be, especially for a film lover. I think you're right about this movie being better than Kill Bill. The reason being that it is just plain more focused. Tarantino himself joked about the fact that he'd been working on this one for so long, then broke to do Kill Bill (which was "supposed to tame him"), and he ended up with a 4+ hour movie. Basterds is better because it isn't winking at the camera as much. It isn't as show-offy. It only shows off when it needs to and does it brilliantly. I will now list the top five things I loved the most:
1. The actor who played SS Col. Hans Landa (Christoph Waltz). This is probably the best performance of the year. He acted the pants off everyone else using four languages.
2. The dialogue, in general, but in two scenes in particular: The opening scene in the French dairy farmer's house and the scene between the German-speaking Basterds, the actress, and the Nazi officer. I loved how Landa rationalized killing Jews to the farmer. He broke that poor guy down...pure evil. Tarantino's dialogue, which is always great, I think, reached a new plain in this movie. It flowed so well, and it was mostly translated to foreign languages. I have never had such a good time reading subtitles. And there is also the fact that so much emphasis is placed on language in this movie (something like five languages as well as countless types of accents and discussions of such).
3. Brad Pitt as really a minor character, who is from East Tennessee, and who is truly the comic relief. I did not expect this. Totally different than I thought it would be. I hope you laughed out loud as much as I did. He read his lines to perfection, just like Waltz.
4. The wink-at-the-audience, show-off moments: Burning down the Nazis with 35 MM film and the final shot and line of dialogue.
5. The violence: baseball bats, hand down the throat, guns pointed at testicles, fingers in wounds, taking of scalps. The scene in the bar with the German actress and the Nazis was probably one of the best scenes of violence ever put on film. It was so well executed, I need to see it again to make sure.
I just love how Tarantino throws everything out there. It's a TARANTINO MOVIE with a movie within the movie that skewers plenty of movies I'll never see while reinventing WWII and the WWII movie with a touch of East Tennessee channeling Cormac McCarthy's Blood Meridian in French, German, English, and Italian.