The Future: Brought to You by James Cameron 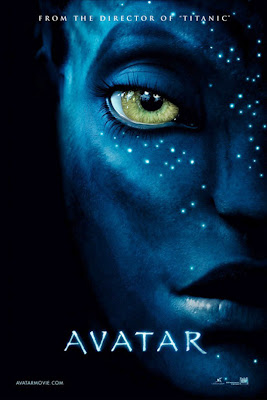 I knew as I was watching there has never been a movie like James Cameron's Avatar. I was seeing something unique and special. I don't usually care for mega-budget special effects movie, this one is special. It is one of the best movie experiences of my life. It is a feast for the eyes that boasts incredible performances by little known actors who will most likely become movie stars. It is an achievement in visual effects like no other movie before it. It is, at once, an allegory about American politics, war-mongering, and our society's destruction of nature and natural resources, and a special effects extravaganza for the ages. Both parts work and work well.

Jake Sully (Sam Worthington), a paraplegic ex-Marine, is offered a job working on the planet Pandora as a genetic fill-in for his recently deceased brother. This brother has had an "Avatar" created for him, which is a remotely controlled body made from human traits and those from the Na'vi, the indigenous "people" of Pandora. Jake's avatar gets lost in the forests of Pandora and is discovered by Neytiri (Zoe Saldana), a young Na'vi woman. Jake begins by following orders from his military superiors gathering intelligence for his warmongering bosses who wish to mine the planet for this mineral that Earth needs (my guess is that Earth at this point...the year 2154...has been pretty much demolished by technology and suburban sprawl and this mineral from Pandora replenishes resources in some way). However, Jake soon realizes how special these people and their planet is and things change.

I won't go into anymore plot detail. That's all you should know going in. However, you should know that this movie needs to be seen on the big screen and probably in 3D or IMAX 3D. I saw it on a regular movie screen and was still blown away by its visual brilliance. I'm talking the most amazing light and color and natural beauty and bizarre creatures and futuristic machinery ever created for a movie. And, although the Na'vi themselves are animated, they actually look and move like the actors playing them through the use of that motion capture technology that gave us "Gollom" in the LOTR films and Zemeckis's last three (Polar Express, Beowulf, A Christmas Carol). It is used to perfection here. It seems more realistic. The digital characters are given real space in physical locations like military bases and among trees and waterfalls. This movie is breathtaking. I can't even begin to fathom how something like this is made. James Cameron (writer/director for the first time since Titanic in 1997) will be hard to beat for the Best Director Oscar. He has proven, again, that he is a master of technology and a master storyteller.

As for me, I'll be going back to see it in IMAX. Who's coming with me?