She's Out of My League: In a League of It's Own 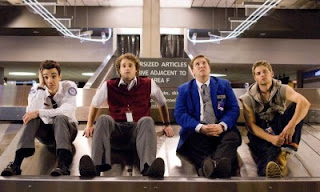 I've been watching a lot of comedies recently. And I haven't seen one quite as nice as She's Out of My League in a while. In a time where so many comedies rely on gross out gags and shock value, this movie rises above. Sure, it's not as funny as something out of the Apatow camp. It's not as slick or cool or even heartfelt as the reigning romantic comedy of last year, 500 Days of Summer. However, it offers us something more than cool and sometimes better than funny. And that is heart.
It finds greatness with it's acting. Jay Baruchel (of supporting fame in Knocked Up and Tropic Thunder) is a really likable actor in that he doesn't really seem like an actor. He plays Kirk, the hapless 5 and airport security agent, like a guy you know, a nice guy, someone you would actually hang out with. It doesn't seem so strange that a girl like Molly, a 10, played by the stunningly beautiful Alice Eve, would like him. He seems real and so do his buddies (T.J. Miller, Mike Vogel, and Nate Torrance), who surround him with horrible advice on how to handle his new found love interest. She meets his crazy family and ex-girlfriend (Lindsey Sloane), which provides some truly hilarious stuff and adds to the movie's overall charm. This movie works because we can identify with Kirk's nervousness and awkwardness and shyness. It makes you root for him, for them, for it all to work out.
This movie is formula romantic comedy. It's been done before. But I laughed a lot watching it. Actually, I should say I laughed with this movie. It is not going for Oscars and it's not going for shock and/or awe. It's a simple movie about a good guy with good friends who want him to land the girl of his dreams.
***1/2 out of ****