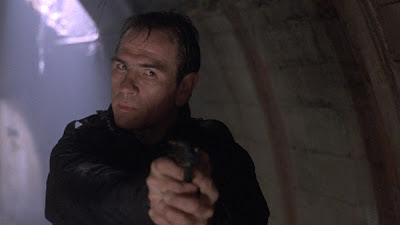 At some point during my recent vacation to Chicago, I asked Amanda if she'd ever seen The Fugitive. I told her how it is such a great "Chicago movie." This is true. Chicago is famous for several reasons (in my mind), including, but not limited to: Al Capone, Michael Jordan, the most over-the-top hot dogs in the country (amazing, by the way), Roger Ebert, that dude that caught the foul ball at Wrigley, and this 1993 Harrison Ford movie. It has to my way of thinking become as iconic as any of those other people and events because, well, it is just plain and simple a truly entertaining movie.

The rundown: Harrison Ford plays a wealthy Chicago surgeon named Richard Kimball, who is wrongly accused and convicted of the brutal murder of his wife. He claims he fought off the "one-armed man" who really did it and then, in a stroke of action direction genius finds himself a fugitive before even getting to prison. He is now the target of the relentless, hard, and hard-working U.S. Marshal Sam Gerard (Best Supporting Actor Tommy Lee Jones). The plot of this movie is so good and so smooth I shall refrain from spoiling too much for those few of you hermits who never saw this flick.

Ford is great in this movie as the man on the run, with a mission, and nothing to lose. However, it is Tommy Lee Jones's performance as the Marshall that makes me love it so much. He plays the character perfectly--sort of sarcastic, charismatic, determined, in-charge, and somehow likable all at the same time. That is what I think sets this movie apart from many others. We actually like the hunter and the hunted equally. We want Gerard to get his man, and we want Kimball to be free at the same time. The little screen time the two leads have together is remarkable. In the well-known dam scene just before one of Kimball's ballsy escapes, he tells the Gerard, "I didn't kill my wife!" To give you an idea of the Marshal's personality, here is his reply: "I don't care!" This line, which I actually chuckle at every time, is great because of its truth and untruth at the same time. Truth: He doesn't care...at least not yet. Untruth: He really does care just not about Kimball's innocence. He simply wants to do his job and catch his man.

And he's obviously good at this job. The movie allows the audience to see not only the hunt for Kimball but strays away from that in one incredible scene of violence, which reinforces the grit of the Jones character. Another escapee is hunted down and instead of negotiating with the man, he just shoots him right out of the convicts grasp on a rookie officer. The rookie is shaken and afraid. Gerard tells him point blank, "I don't negotiate." We sense that this man is dogged, a bloodhound, in his pursuits and doesn't leave many cases cold. Thus, we root for him just as we're rooting for Kimball to clear his name.

Director Andrew Davis, a veteran of action movies, is the architect behind this hunt. And what I admire so much about him as a directer is how he makes this movie entertaining without ridiculous chase sequences and explosions. CGI? You will find none. Of course, in '93 there wasn't much in the way of quality CGI as we know it today, but I digress. The biggest special effect in The Fugitive is the escape scene with the prison bus and the derailed train. Davis and his crew literally derailed a train here...like for real. Eat your heart out Michael Bay. This movie is suspenseful and taut and enthralling for almost any age (I saw it in the theater at age 9 and loved every second even then). And I think Davis's direction plays a large part in that. The chases seem real, the characters seem real, and the plot is quite plausible. We glide along as part of the hunt and the mystery and feel right at home in its Chicago locations.

Famous chef and TV personality Anthony Bourdain said, and I'm paraphrasing here, that apart from New York, Chicago is America's only other true and great metropolis. Having visited both cities, I can agree. Chicago, in a way, is sort of the forgotten metropolis. It is a massive city, but one with that mid-western feel. The people there are just more real to me than New Yorkers. Chicago plays an integral role in The Fugitive becoming the backdrop for the Ford-Jones manhunt. At one point Kimball eludes his predator once again in the midst of a downtown St. Patrick's Day parade. Gerard and his team of Marshals are able to use the streets and the sounds of the city to locate their suspect at one point hearing the bells and stops of the "L" train. Furthermore, the "L" train also works in conjunction with the streets and buildings to create a dark and ominous tone in one key scene...foreshadowing a future, and unexpected, villain.

With The Fugitive, Harrison Ford continued his reign as the aging action star, a title he would keep for many years after this film. Andrew Davis, who has never made a movie as good as this one, continued making fairly well-received action movies. The City of Chicago has been a mainstay in the movie business with what that very famous Oscar-stealing musical (and all that jazz) and as the shooting location for Christopher Nolan's two great "Batman" films. And Tommy Lee Jones ended making a huge mark with this film by winning the Oscar for Best Supporting Actor. That dog sure does hunt.