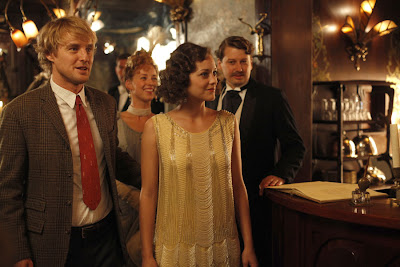 Paris is a magical city. I've never been there, but, in his new film Midnight in Paris, Woody Allen sure made me think so. It is indeed a magical film. Many have said recently that it's his best in years. It's certainly my favorite since Match Point in 2005. His movies are never really bad, but when you've made at least one movie per year since 1977 it's hard for them all to be masterpieces. This one is close. It's like Field of Dreams for English majors.

Midnight in Paris stars Owen Wilson as Gil, a self-admitted "Hollywood hack" of a screenwriter, who is on vacation in Paris with his fiance, Inez (Rachel McAdams), and her wealthy family. Gil is tired of writing crap movies and has decided to work on more serious works like the novel he is currently writing. He's a bit of a dreamer and longs for the past. He wishes he could've been around Paris in the '20s, when the finest American writers were doing their best (and worst). He wants to be impulsive and entertains the fancy of maybe even staying abroad. Inez and her family see all this as simple pipe dreams and put no faith in his idealism. Then, one night, as Gil sits, sort of drunk, on a side street in Paris, the clock strikes midnight...

I won't even begin to go into what he sees and experiences. I can only say that what ensues is one of the most delightful times I've had at the movies in a long time. The casting of Owen Wilson is perfect. He plays Gil with just the right notes of humor and boyishness and longing for a more artful life. Paris becomes his muse and his audience and his past in some very inventive and funny and magical ways, and it is a complete joy to watch. He finds the enlightenment of his late night walks immensely satisfying and, in the end, he understands how his life could be and should be. He learns how to truly love when he befriends, over the course of several of his late-night strolls, the beautiful Adriana (Marion Cotillard), and he learns how to truly be a good writer in encounters with many other assorted characters (a whole slue of great surprises).

Perhaps the best thing about Woody Allen films for me is that they feature characters that are so well-read. Midnight in Paris is certainly no exception. His characters speak at an elevated level. They really talk about things that people like me care about. I've had conversations like they do in his films. The dialogue in this film is, above all, what makes it so good. You could probably just listen to it and still find it funny and charming. The great look of Woody's magical Paris is simply an added bonus. I left Midnight in Paris with two things on my mind:  That was the best movie I've seen this year, and I can't wait to see it again.