Man! That Music Creeps Me Out! 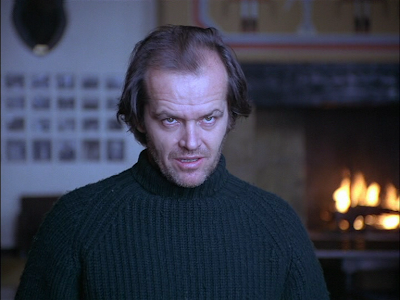 Stanley Kubrick's 1980 film The Shining is one scary movie. And it scares you without being very violent. There is really only one murder in the film, and it's only a little bit bloody. Of course, there's that whole blood pouring out of the walls shot and some quick gory images, but... Anyway, when my students talk about "scary" movies like Saw VI and Paranormal Activity and the new PG-13 jump-fest that week, I always tell them they should see a really scary movie like The Shining.

What makes this movie scary? The Shining is scary because it is NOT about blood and guts and cheap thrills. It's about isolation and alienation and basic human fears like being locked up in a creepy old haunted hotel 30 miles from the nearest town with six feet of snow on the ground outside and no phone lines. It's about alcoholism and abuse. It's about an extremely dysfunctional family that pawns off the guise of being happy and then puts itself in a situation where it doesn't need the guise anymore. It is scary because of these things and the madness that overtakes the main character, Jack Torrance (brilliant performance from Jack Nicholson).

We know the basic story of this movie: a man, Jack Torrance, gets a job as the caretaker of the Overlook Hotel, which sits high in the Rockies and has a scary past, he has a history of alcoholism and abuse, his son is sort-of psychic and has a creepy imaginary friend, his wife (Shelley Duvall) is oblivious to almost everything but tries to be a good wife and mother, they move to the hotel and, well, things don't get better for them. The plot is really pretty simple, and Kubrick, taking the Stephen King novel as his source material, simplifies it even more. He spends a lot of time building things up, creating tension in the audience. I leaned over to Amanda at one point while we were watching and said, "I think it's great how it takes so long for something to happen. And, man, that music creeps me out."

Stanley Kubrick is largely consider one of cinema's greatest directors even though his films are mostly slow and long and usually more style than substance. He was also known for being particularly hard to work for as an actor. There are stories about how during the filming of The Shining, he would do 100+ takes of some scenes, get in shouting matches with Shelley Duvall. In fact, it took almost a year to make this movie, which is much longer than originally planned. He really knew how to get into an actor's head, which is extremely effective in the case of this film. Furthermore, Kubrick's style is really incredible. His camera is constantly moving. He uses wide-angle lenses and long shot to alienate the audience from the character, to make them seem distant and alone. The camera slowly follows behind young Danny as he cruises the hallways of the Overlook in his big wheel, and we wonder what's around the next corner. What is he going to see? Is what he sees really there? Wait...what?

Yes. All of the characters see things in this film. Very scary things. Blood, dead twin girls, a 1920s bartender name Lloyd and various past patrons of the hotel, Scatman Crothers is in it as the only trustworthy character, axes, a slimy old woman in a bath tub, etc. However, we can never be sure if these things are really there or the hallucinations of a psychopath or a tired, scared woman or the psychic visions of a little boy. Thus, we are alienated once again from the characters because not one of them is put into a position where they can be totally trusted. They are either crazy, scared, or distant, or all three.

The Shining was not very well-received by critics, but initially did pretty well with the general public. It has certainly stood the test of time and is now widely-considered one of the best horror films ever made. My Mom rented it for me when I was maybe 13-years-old, and I was literally scared to walk up the stairs to my bedroom after we watched it. For me, it is the quintessential horror movie because it is not a blood fest. It gets into your head and sticks with you. It's enigmatic and makes you think. And that damn music. Man, it's creepy!