Pigs on the Wing 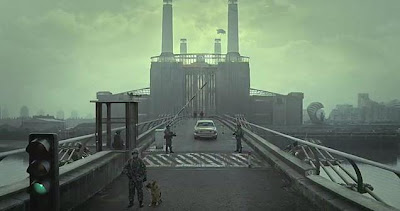 There's a shot in Alfonso Cuaron's 2006 film Children of Men that looks just like the album cover of Pink Floyd's 1977 album Animals. I'm quite sure this was no accident. As a director, Cuaron is just that good. The Floyd album is said to be based on George Orwell's Animal Farm, a critique of the decay of Britain's society. In hard times, humans resort to their most basic instincts and become, in many ways, animals. This is certainly true for the futuristic Britain in Children of Men, the most Orwellian of any movie ever made.

Set in 2027, it stars Clive Owen as Theo, a former activist who has given up fighting for peace and justice and lives a drunken life in a torn world. We are from the very first shocking scene immersed in a Great Britain of complete chaos. Furthermore, the world's major cities are being destroyed, people are revolting, the governments have finally made it from bad to worst possible, illegal immigration is more serious than any other crime, and, the kicker, no woman has given birth to a child in over 18 years. Theo is saddened, alone, and often scared. He seeks solace in the home of an old friend Jasper, an aged pot-smoking hippie played by the brilliant Sir Michael Caine. They talk about how things have deteriorated since the early 2000s, how war and hate have finally got the best of peace, and how it could be that women cannot get pregnant anymore. Then, Theo is "recruited" by his ex-wife, Julian (Julianne Moore), a leader of a "terrorist" organization bent on leading an uprising against the British government. He is tasked with the job of escorting a young woman named Kee to the coast...I can reveal no more plot.

This movie should be seen with all its surprises by ALL people. It works as a sci-fi action movie, a study of the Clive Owen character, and, most importantly, an indictment of the society we all live in now. A society that is beginning to crumble economically, that is torn by war and terrorism across the globe, and that is fearful of "illegal" immigration. Added to this, the movie is expertly made by its director, Alfonso Cuaron, a Mexican filmmaker who has literally done everything right. It is said that he made the third Harry Potter movie to be able to get financing for this one. This movie is mightily paced. It glides along, and we are captivated, oftentimes without the camera cutting. There are two action sequences composed of literally one single 4 or 5 minute shot. No fancy, fast, choppy editing. No cuts from here to there. You are literally right there in the middle of it. And it is so cool.

Perhaps the greatest thing about Children of Men is that it can appeal to anybody. There is humor, action, violence, social commentary, tragedy, hope, and love. It is a labor of love and joy for its filmmakers, despite its harsh themes. I have seen it at least half-a-dozen times and can't wait to make it a dozen and so on. It is simply one of the best movies I've seen.