What About Breakfast at Tiffany's? 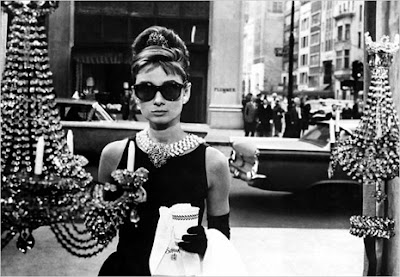 Blake Edwards's 1961 film Breakfast at Tiffany's is one of those that has eluded me for many years. Mom tried to get me to watch it years ago, and, at the time, just couldn't hold my attention. It still can't. I sat down to watch it earlier this week and really just found it boring. There are some really funny, classic Blake Edwards scenes, but I just found myself frustrated with it for the most part.

The beautiful Audrey Hepburn plays the classic Manic Pixie Dream Girl (see footnote*), Holly Golightly (great character name, by the way...Thanks Truman Capote!), a Southern girl turned New York socialite, who makes her bones as a sort-of escort to older wealthy men. She is, to me, a classic gold digger. A handsome young writer named Paul/Fred (George Peppard) moves into her building, and they instantly strike up a friendship. He is a sort-of gold digger himself humoring an older woman (Patricia Neal), who claims to be his decorator. There are some really great scenes between the two leads, including a date filled with things neither have done before. However, I never could get over how fickle and flighty Holly is and how Paul/Fred kept chasing after her. Having been under the spell of a Manic Pixie myself, I just ended up feeling sorry for poor Paul/Fred.

This is the iconic role for Audrey Hepburn, who, as Holly Golightly, dresses the walls of many-a girl's college dorm room. She and New York City look great in this film. And I really enjoy the presence of Audrey Hepburn. She is cute and funny and beautiful, but, in the end, I just didn't like her. All these men gush over her, but never seem to take the time to really know her. Only Paul/Fred ever really does, and he just misses getting burned. Blake Edwards's style shines in one great party scene at Holly's apartment where things escalate in the way only a great 1960s farce can do. It reminded me of the much better Edwards film The Party, starring his greatest collaborator, the late great Peter Sellers. This scene brings the most laughs the movie has to offer.

At one point, Amanda turned to ask me, "Do you think this is weird some?" I answered, "Yes." It's weird in a not good way. The subplot with her "ex-husband?" Doc Golightly (Buddy Ebsen) and her brother Fred doesn't work at all for me and comes off as strange. Audrey Hepburn is beautiful and George Peppard is handsome. They are young and like each other. Why do the unrelenting complications have to get in the way of this so much?


*Manic Pixie Dream Girl (MPDG) is a stock character in films. Film critic Nathan Rabin, who coined the term after seeing Kirsten Dunst in Elizabethtown, describes the MPDG as "that bubbly, shallow cinematic creature that exists solely in the fevered imaginations of sensitive writer-directors to teach broodingly soulful young men to embrace life and its infinite mysteries and adventures." MPDGs are said to help their men without pursuing their own happiness, and such characters never grow up, thus their men never grow up.