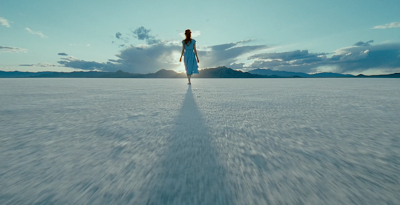 What a debate I had with Amanda about this film! She absolutely hated it. To the point where she was using foul language. Indeed Terrence Malick's The Tree of Life is not for everyone but for pure film fanatics. I have no doubt that it is involved in ongoing discussions amongst artsy college students like I used to be. For them, I recommend seeing it and seeing it again. It has left an impression on me, and I plan to see it at least one more time. For everyone else, it will probably just seem a frustrating mess.

There is no plot. There is haunting voice-over from the mother telling us of two ways through life: "The way of nature and the way of grace. You have to choose which one you'll follow." Then the death of the adult son of the O'Brien family and their sadness, the grown son (Sean Penn) dealing with his past as a middle-aged business man, the creation of the universe, dinosaurs, the growth of a Small Town, Texas family in the 1950s, its function and disfunction, flowing dreamscapes. We are left, in the end, to make sense of all this for ourselves. There is almost no dialogue. There are stunningly beautiful images and music that continue to haunt me, that "wrestle inside me."

Terrence Malick has only made five films since 1971. He is reclusive, never does interviews, hates the Hollywood system. The Tree of Life just took home the Palm D'or, the top prize at the Cannes Film Festival. Malick didn't bother to show up for any press conferences or Q and As. In my mind, he simply wants people to see this and have it bother them, take them over, confuse them, and be captivated by its craft and beauty. As of now, this is my least favorite of his movies. It is difficult and deliberately slow, but it is fascinating. That was the one description I could mutter when I left the theater. Malick moves his camera around with both "nature" and "grace." He strings together images that seem impossible. It is beautiful to see. Many call him a poet. But where is the entertainment?...

...Which brings me back to the argument with Amanda. Movies are supposed to be entertaining escapism. To me, movies are at their best when they are not just thoughtful and beautiful but also providing a sense of entertainment. Amanda's problem, and most people's I would say, is that, in the end, Malick doesn't leave us with much to grasp onto. Nothing is resolved in an understandable way. The heart of the film (and the best part) is the story of Mr. and Mrs. O'Brien (Brad Pitt and Jessica Chastain) raising their three sons from birth to adolescence. In the beginning, we find out that one of the sons dies as a young adult, but it is never made truly clear how it all turned out. This is where the frustration comes in, even for me. In the end, I was entertained only by Malick's ability to evoke beauty and nature and grace and confusion. Maybe that's enough. Amanda found no entertainment value. Neither she nor I were satisfied with its attempt to tell a story. Maybe that's the way it was meant to be.