Conversations with Rich Teenagers in Manhattan 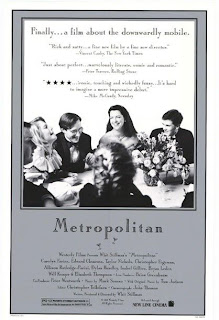 Originally Posted: 11/13/2009
I just re-watched a movie tonight that I absolutely love. It takes place in a world that I know nothing about, yet it touches me to the extent that I am smiling right now. So, this is me adding one to my Christmas list for this year--the Criterion DVD of Whit Stillman's 1990 debut Metropolitan. If I don't get it as a gift, I believe I'll gift it to myself.
Most people I know have never even heard of this movie. However, it is generally regarded by critics as a good film with great dialogue. In his original review of Metropolitan, Roger Ebert wrote that Stillman, "has made a film Scott Fitzgerald might have been comfortable with, a film about people covering their own insecurities with a facade of social ease. And he has written wonderful dialogue, words in which the characters discuss ideas and feelings instead of simply marching through plot points..." That is so true. I like movies where the dialogue overrides the plot. Sometimes it is just more interesting to hear what people have to say than what crazy plot they're involved in.
Stillman gives us, in Metropolitan, a group of young men and women embroiled in the Manhattan debutante season during Christmas break. The film opens with Tom Townsend (Edward Clements), a very serious young man, sharing a cab outside The Plaza with the late-teenaged spawn of the Upper East Side. Tom, you see, is a "West Sider" and not as wealthy as Nick (Chris Eigeman) and the others. They haven't seen him around at the "dances" this season, but they invite him to the after-party anyway. Tom pretends to be opposed to all this stuff, but comes to love it. Audrey Rouget gets a crush on him, but he's in love with the elusive Serena Slocumb, who is in love with the pony-tailed Rick Von Sloneker and so on and so on and "Cha-cha-cha."
The young rich begin going to Sally Fowler's parents' penthouse, talking through the night about French socialist writers and the idea that "preppies" like themselves may be doomed to downward mobility. There is presented scene after scene of just simply talking. The comedy is in the dialogue. Very dry, straight-forward comedy. A comedy-of-manners. These young people are brutally honest. They have it all but must act like they don't want it. When the deb parties begin to slow down, the group starts to break up and go back to school or Paris or wherever. And you feel Tom Townsend's loneliness in the fact that this is the time in these people's lives when it is time to begin growing up. To begin the possible downward slide--the "failure." Or maybe not. There's still time.
The great thing about Metropolitan, apart from the dialogue, and the reason I relate to it so much is that it is about the idealism you feel as someone in your late teens/early twenties. I grew up middle class in East Tennessee, but I've felt these feelings and had these conversations and confusions and desires. Maybe not in the same way but close.