Catching Up: Three of My Favorite Movies 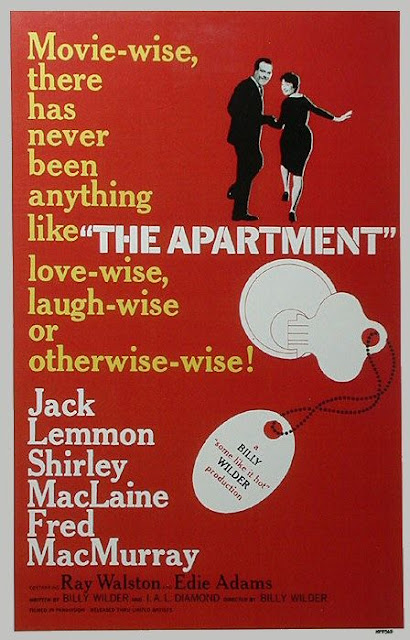 I haven't written in six weeks. And it gnaws at my soul that I just don't have time since school started back. However, in that time, I have been quite productive. Since I last posted, I have thrown a great party for my girlfriend's and sister's birthdays, played a good round and a bad round of golf, brought myself up-to-date on the HBO series "Entourage," been to two high school AND two middle school football games (and only one win out of four -- Go JV Hawks!), taught and assessed about eight Tennessee State Standards for 7th and 8th grade Reading/Language Arts, drafted my Fantasy Football team, shattered the screen on my iPhone 4, and watched Them Vols beat Montana. What I haven't done is watch many movies.

What will now be is a game of catch-up, if you will. Here are a couple movies I've watched in the last month-and-a-half, and how I feel about them: 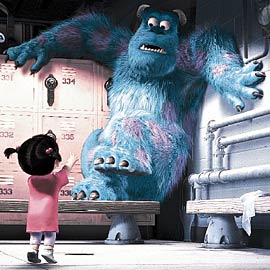 There are some movies so sweet and so rewarding to the audience that it's hard to even describe it in words. Pixar's Monsters Inc. is one of those movies. Pixar has a knack for developing movies that appeal to everyone. You'll laugh, you'll cry, you'll be excited. That should be their motto. Monsters Inc. is the story of the monster in your closet from the monsters' point of view. Yes, the business of making kids scream is just that--a business. And yes, monsters are real, and they generate the power for their cities with the screams of children. The best and most successful at this is James P. "Sully" Sullivan (voice of John Goodman). Now, I've gone and made this sound all serious. It is actually quite light-hearted and very funny. Funny to see that the monsters of Monstropolis are as scared of children as the children are of monsters. Funny to hear Billy Crystal's voice in the body of a round, green, one-eyed, wise-cracking monster. And interesting to have a film that is perfect for children have so much to say about love, friendship, and even energy crises, while being hilarious (for adults and children), exciting (with ingenious action sequences), and heart-felt bringing tears of happiness with its brilliant closing scenes.
The Apartment (1960) - Dir. Billy Wilder; Starring Jack Lemmon, Shirley Maclaine, Fred McMurray 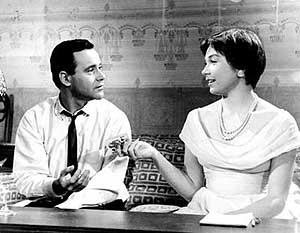 Billy Wilder's Oscar-winning The Apartment is set in the days leading up to Christmas and New Year's. And it's a romantic comedy so great that the "rom-coms" of today should take a step back, have a viewing party, and see how it's really done. Jack Lemmon plays C.C. "Bud" Baxter, an insurance clerk making his way up the ranks of the company by hiring out his bachelor pad to the exploits of senior executives. He is sweet, sort-of shy, lonely and one of the best movie characters I can think of. Embroiled in the office and sexual politics of his time (think "Mad Men" in black and white), Bud is a step behind the game but right in the middle of it at the same time. He is crazy about the elevator operator, Ms. Kubelik (a cute, bubbly, but lonely in her own right Shirley Maclaine), but his advances towards her are constantly thwarted by the game that his his job and his livelihood. What he comes to learn about himself in these two winter weeks of the shortest days of the year is great to watch. And this movie has not dated a bit. It is as fresh now as it was then and one of my all-time favorites. 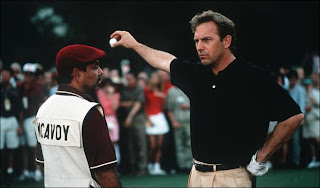 Of all the movies about golf, this one is my second favorite. Mostly because, unlike Caddyshack or Happy Gilmore, it is actually about golf. It's not as pretty or well-made as my favorite golf movie, The Legend of Bagger Vance, but it is realistic in the obsessions one must have to be a truly great golfer. Kevin Costner teams back up with Bull Durham writer-director Ron Shelton playing a lowly driving range pro from West Texas named Roy "Tin Cup" McAvoy. He almost-proudly proclaims to a new "student," a local psychologist Dr. Molly Griswold (Rene Russo), that his unfinished swing relates to the fact that he never "finished anything in his life." He was once an All-American college player and amateur, who let his risk-taking ego on the course get in the way of professional glory. In an attempt to prove his love for the Russo character and embarrass her boyfriend, tour pro David Simms (Don Johnson in all his sleazy greatness), Tin Cup and his low-rent team of misfits, led by best-friend and caddy, Romeo (the great Cheech Marin), make a historic and nearly impossible run at the U.S. Open. While the dialogue sometimes feels fake and over-written, you gotta love a guy who lives his life speaking in golf metaphors and can shoot par with a 7-iron.