Catching Up, Round Two: Movies I watched in September 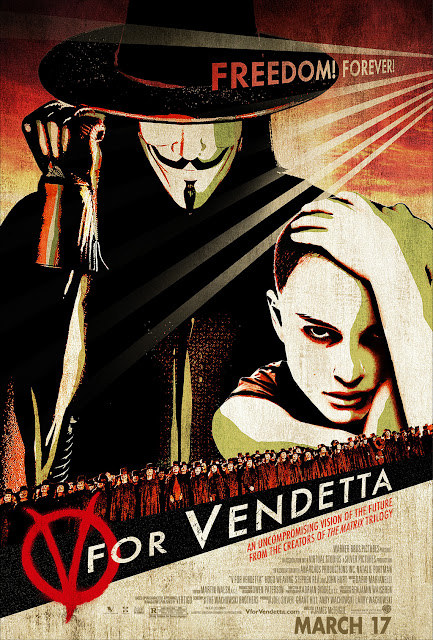 So, apparently I'm only going to write new blog posts about once a month. It really irks me that this fact has come to fruition: I just don't have time to write. Anyway, I am now saddled with a week off from work and figure today is the day to play catch-up. 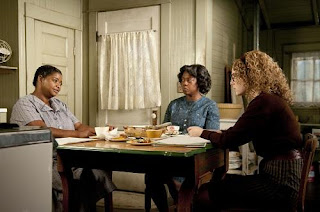 Mississippi in the early 1960s was perhaps the most racially divided place in the country at that time. The Help tells the story of four young white women and their relationships with the black maids that serve their families. And, watching it, I posed an interesting question to myself: Are the white women just as much victims as the black women? It is made clear early on that it is these maids who raise the children, do the cooking, love and care, and for what? Little pay and a separate bathroom in the garage in the 100+ Mississippi heat. It seems to me that there is a fine line between ignorance and evil. This is clearly and immediately seen by Skeeter Phelan (Emma Stone), a hometown girl turned college graduate, who comes back home to Jackson to try to start her writing career at the local paper. She is instantly embroiled in the town society functions led by Hilly Holbrook (Bryce Dallas Howard), who is one of the most evil movie characters in recent years. It becomes clear, however, that her evil is borne out of ignorance. The ignorance of prejudice and racism. When Skeeter begins writing a housekeeping column, she enlists the help of some of the maids, including Aibileen (the incredible Viola Davis). Thus begins a project in which the maids are given a reluctant voice to speak out against the racism and hate and ignorant prejudices. This movie is very well-acted, and it gives us a look at the more personal side of the Civil Rights-era American South. It is obvious and pretty tame as far as the subject matter goes, but it raises some interesting questions I would have never thought to ask.
Something's Gotta Give (2003) - Dir. Nancy Meyers; Starring Diane Keaton, Jack Nicholson, Amanda Peet 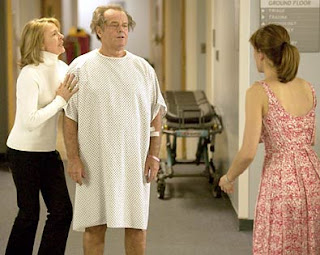 Nancy Meyers' movies are strange to me. They contain characters that are just so obviously in a movie. I have trouble getting past that. Her writing is funny; the dialogue is consistently entertaining if a bit overwritten, but the locations and situations seem so ridiculous to me. How can all these people just happen to be at the same New York City restaurant on the same night at the same time while addressing the main theme of the movie? Older men who date younger women. Jack Nicholson plays a never-married, aging playboy, who, while on a weekend getaway to The Hamptons with his new girl, Amanda Peet, ends up running into trouble when her mother (Diane Keaton) shows up unexpectedly. When he suffers a heart attack and ends up under the care of the Keaton character, the movie does get good. Can a man like this actually be attracted to a woman his own age? Can he fall in love? With lesser actors and dialogue for them to speak, this movie would be on the bottom shelf of the Lifetime catalogue, but I actually enjoyed it pretty well. It is often hilarious, and Keaton and Nicholson have a great chemistry. It's not as good as Meyers' latest movie It's Complicated, which I found way funnier, but it's a good one to pop in on a random Monday night when you need a few laughs.
Goodfellas (1990) - Dir. Martin Scorsese; Starring Ray Liotta, Robert DeNiro, Joe Pesci, Lorraine Bracco 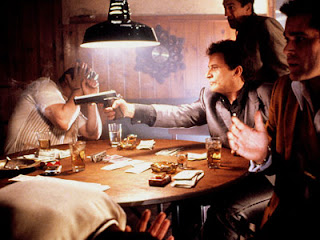 I'm not sure of the consensus on this, but, to me, Goodfellas is the quintessential Scorsese picture. Amanda was extremely reluctant to watch it, despite the fact that it is essential viewing for anyone who even remotely likes movies. She hates violence. This movie is certainly violent, but it is so much more. It oozes Scorsese's well-known stylistic touches. Zooms and pans and freeze-frames. Never-ending arrays of perfectly placed pop music. Brutal and inventive beatings. It is over two-hours long but non-stop storytelling. Never slow, always entertaining. It is, at its center, like Taxi Driver or Raging Bull, and follows in their footsteps as a story about men trying to reach unattainable levels of power and machismo. This time it is the "true" story of Henry Hill (Ray Liotta), a half-Irish, half-Cicilian boy growing up in Brooklyn in the 1950s, coming-of-age as a gangster in the '60s and '70s. This movie glides through nearly thirty years of life in the mafia. The best things about it: it's lack of plot (it's just a history of the mafia), the music and the beatings (Is there anything cooler than DeNiro's foot coming down on some poor "mutt's" head as Donovan's "Atlantis" plays on the jukebox?), the voice-over narrations from multiple characters, including Henry's wife Karen (Lorraine Bracco), and, of course, those memorable scenes engrained in every film buff's psyche (walking into The Copa through the back door, "What do you mean I'm funny?," Peters and Paulies, paper-thin garlic, and veal cutlets). Goodfellas is one of the best movies ever made. I'll just go ahead and assume you've seen it, so I don't have to scoff at you.
V for Vendetta (2006) - Dir. James McTeigue; Starring Natalie Portman and Hugo Weaving 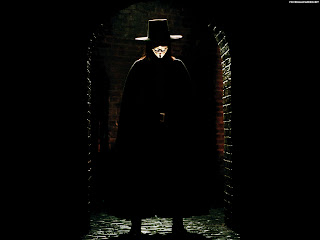 Guy Fawkes was a man driven by a distrust in his government, a man who wanted to change things, a man hanged, drawn and quartered in a 1606 for his plot to blow up Britain's Parliament on November 5, 1605. V for Vendetta opens with the line "Remember remember the fifth of November / The gunpowder, treason and plot / I see no reason why gunpowder, treason / Should ever be forgot."A man who calls himself V (Hugo Weaving) and wears a creepy Guy Fawkes mask rescues a young woman, Evie (Natalie Portman), from the Secret Police one evening in a future, totalitarian Great Britain. He takes her to a rooftop where he makes it known, as classical music begins to play, fireworks go off, and buildings blow up, that he is a terrorist bent on changing the British government. He will stop at nothing to end the injustice. He plans to blow up Parliament on November 5th. Thus begins an action-thriller unlike many I've seen. It is very smart, dedicated, has some wonderful dialogue, including V's alliterative speech upon our first seeing him, and some really quite subdued, thoughtful scenes about the possible state we could come to if we continue to buy into and live in fear. There is a scene in which Evie is help captive that serves as a sort-of interlude to the action of the main plot. This is brilliant and worth the price of the DVD. V for Vendetta is very well-written, well-acted, and relentlessly entertaining. And it makes you want to put on a British accent and recite, "Remember remember the fifth of November..."