A Stranger in My Skin 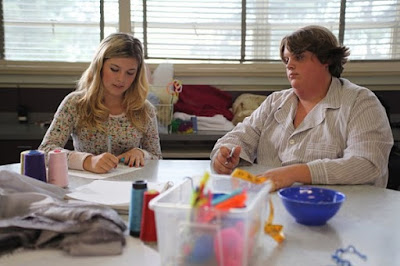 I got to thinking earlier today about why, since I have some time off work for the holidays, I haven't written about the movies this week. I guess I have just been satisfied with my laziness. But then tonight I watched Terri. And I can't stop thinking about it. It has been a long time since I wanted to start a movie over and watch it again. The only other movie that's done that to me this year was Terrence Malick's odd opus to the cosmos The Tree of Life. That one, however, has proved to elude me for a second viewing as of yet. Maybe it really is too far beyond me.

This one...I feel it. I lived it. It is one of my favorite movies of the year.

Terri stars an unknown named Jacob Wysocki as the title character. He is overweight, a high school student, confused about himself, his life, girls. He lives with his on-his-way-to-senile Uncle James (Creed Bratton). His parents aren't around. He wears pajamas to school because "they're just comfortable." He seems like a likable kid, sort-of weird, but "good-hearted."

You will read in other reviews about the director, Azazel Jacobs, and his assured pacing. True. This movie allows itself to just let things happen, which is great. But what I found fascinating is how understanding Jacobs is of the feelings of adolescence. He takes this odd, sometimes uncomfortable story and makes it feel real. He deals with longing and the human need for contact perfectly. Terri begins meeting with his assistant principal, Mr. Fitzgerald (the great John C. Reilly), who is comforting, and honest, and friendly but messed-up himself. "I screw up all the time," he tells Terri, "That's what people do...Life's a mess, dude. And we're all just doing the best we can." Through this contact, Terri begins hanging-out with an even weirder and more messed up kid named Chad (Bridger Zadina), one of those kids who is a nervous wreck, gets in trouble, picks at his hair until it comes out. He also finds himself with a crush on a girl named Heather (Olivia Crocicchia), who he saved from being expelled after she experimented with a boy in class. She is very pretty, sweet, and she and Terri share a simple flirtation that cuts right to the core of those sometimes unbearable memories of crushes and infatuations.

There is a scene in Terri where the three teenagers find themselves together at Terri's house, sharing some stolen whiskey, sampling Uncle James' meds, that is tense and warm and funny and awkward and sympathetic and climactic and true. This scene shows us the fears of growing up, the downward spiral of youth and innocence. This movie is worth seeing for this scene alone. It is perfectly strange and touching, and it elevates this movie far above your average coming-of-age story.

Watching Terri I remembered what life is like for an overweight teenager. Sure, I had more friends than Terri, yet I had to work hard to keep up a certain image. I've had strange friends and weird nights and experimentations and longings for extremely cute girls with probably too much of an edge for me. I've been just "friends." The difference is that Terri has enough happiness inside himself, and knowledge of how time will change him, to smile about it all. I should've been so lucky in high school.