Different but Not Less 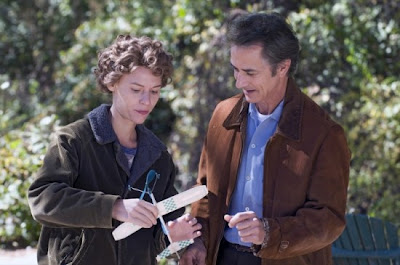 I'm beginning this as the credits are still rolling on the movie I just watched. It is one of the most effective, and affecting, movies I've seen in a long time. People should see this movie. It is fascinating, strange, stylish, heartbreaking, and uplifting. To quote Roger Ebert, I want to "hug myself" with the joy and the knowledge of how great life can be. The fact that hugs factor into this movie so well is a bonus. The movie I'm talking about is Temple Grandin from HBO Films.

Claire Danes gives one of the finest screen performances in recent years. I think others would agree. She won the Emmy for Best Actress last year. She plays real-life Colorado State professor, animal science expert, and advocate for autism, Temple Grandin, who was born with autism, defied all odds and became one of the most successful people in her field. Danes plays her perfectly, brilliantly side-stepping what may have been an opportunity to overact. She is loud, she talks too much, she has all the quirks one might expect from someone with autism. She is also mannered and understanding. The real-life Grandin has devised humane ways to treat cattle as they are prepared for slaughter in the form of revolutionary corrals and slaughterhouses that are currently used, the film states in a note at the end, in half of the cattle farms in North America.

While Danes is great as Grandin, this movie also succeeds in its story-telling techniques. The director, Mick Johnson, uses smooth stylistic devices to show how Grandin's brain works. She has a photographic memory. In fact, she learns by remembering and connecting images. Futhermore, the plot, especially in the first half of the film, wisely flashes back and forth between her experience in boarding school as a teen and her first semester as a college student. Because of this construction, we are able to see how Grandin was shaped by those who cared for her.

Temple's mother (Julia Ormond) struggles with the harsh truth that children with autism "don't want" human contact. She can't hug her daughter but obviously loves her, wants to comfort and protect her. Before beginning college, Temple spends the summer with her aunt (Catherine O'Hara). While on her aunt and uncle's ranch, she strengthens her bond with cows and realizes that she can experience the human need for hugging by getting into the "squeeze machine" used to calm cattle as they are inoculated. She, upon entering college, designs and builds a machine that replicates this and uses it to calm herself when she panics. Where most people would seek out human contact, a person with autism has to find other outlets to experience a hug's calming effect. Her science teacher at boarding school, Dr. Carlock (the brilliant David Strathairn), helps her to reach her potential as a budding scientist and pushes her through the "door" to college and beyond.

The second half of the film focuses on her work as a grad student and later a writer for agriculture magazines as she navigates through the male-dominated world of cattle farming. Her care for the humane treatment of animals becomes evident, her driving force, and it is a joy to watch how she figures out ways to overcome her awkwardness, nervousness, and anxieties to achieve her goals.

Temple Grandin is not a movie I would usually seek out. Films like this, for me, tend to be overly sentimental and heavy-handed. This is not either of those and is all the more rewarding to me for that. I laughed, I cried, and I left the room at the fade to black in order to share the joy of watching a surprisingly great movie. I hope, for your sake, that you seek it out. There's nothing like a good hug for the soul.