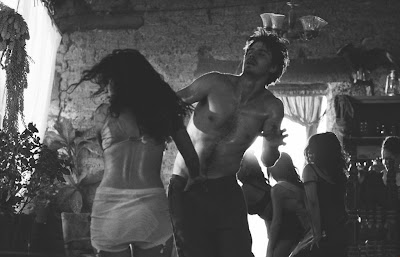 It's been weeks now, and I still can't get the trailer for Walter Salles's forthcoming film adaptation of Jack Kerouac's On the Road off my mind. So without further ado, the top-three things I love about this trailer:

3. The way it looks, I'm not sure I can describe it. I'll try. It is America in another time painted with the softer tones of the post-War heartland. Dark clubs, rooms, wooden floors, sweat, old cars, cigarette smoke. It just oozes that feeling of a time that was real once. One that guys like me, with pasts like me, with a love of literature like me really want to see. It makes me want to BE THERE with the mad ones.

2. It actually makes Kristen Stewart look beautiful. I knew there was something missing from that girl, and it would appear that Jack Kerouac a la director Walter Salles discovered...her smile and her eyes. Yes. I'm sorry Twilight fans but, as my quest to never stop finding things wrong with that movie (much to Amanda's chagrin, I might add) continues, this one could offer hope. That the girl who became Bella Swan is actually a Bella Swan.

1. Within seconds of viewing the trailer, I was at my bookshelves dusting off my old copy of On the Road. It is going to get another read. There is nothing better than being inspired to read something. It adds purpose to this upcoming summer and long nights of beauty and conversation under the burn, burn, burn of the roman candle streaked stars.