For Me, It's Going to Rushmore

When I was in high school, I rented a little movie with Bill Murray on the cover called Rushmore. It changed my life. I felt, for the first time, that there were movies out there meant for my generation. This movie also brought big attention to second-time writer/director Wes Anderson. Since Rushmore, Anderson has made five feature films and one short (in order, The Royal Tenenbaums, The Life Aquatic with Steve Zissou, Hotel Chevalier (short), The Darjeeling Limited, The Fantastic Mr. Fox, and Moonrise Kingdom). They are all great in their own right. None, for me, are more memorable than another. Having recently watched what I think are the three best, I have developed a theory about Wes Anderson's career. That being that with his latest film, Moonrise Kingdom, he has finally made his perfect movie. I'll start with a list. And you have to imagine this list as title cards perfectly framed in the middle of a camera shot colored in reds and yellows with a Rolling Stones or Kinks song playing in the background. 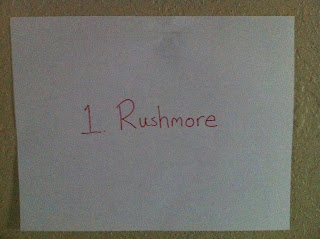 For the reasons stated above, this is and will always be my favorite Wes Anderson film. Amanda and I re-watched it on a Tuesday in the middle of the day. If you haven't seen it, I feel sorry for you. Here is a brief plot summary: a fifteen-year-old prep school student named Max Fisher (Jason Schwartzman) is involved with every aspect of his true first love, Rushmore Academy. He is president, founder, and/or member of almost every club you can imagine. His grades suck. At a school assembly, he befriends a local millionaire named Blume (Bill Murray) and later befriends (and gets a huge crush on) a new elementary teacher, Ms. Cross (Olivia Williams). What ensues is a Wes Anderson dream-world, oddball love triangle with a kick-ass soundtrack of rare '60s tunes. It is funny and whimsical and often very touching. It has brilliant, quotable lines of dialogue (from Anderson and writing partner, Owen Wilson) like this little exchange:

Blume nearly chokes on his drink.

Rushmore also truly marks the first we see of Anderson's distinct visual style. His color palette, beautiful, but not yet fully realized as you see in his later work. Shot's perfectly framed. Small details filling every bit of the screen. 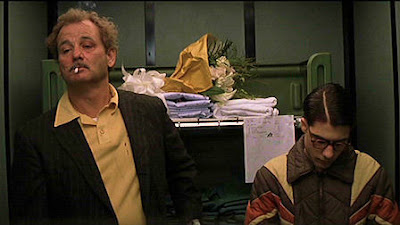 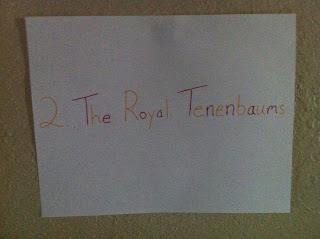 When Alec Baldwin's voice-over narration begins, you are hooked. This time into a world completely of Wes Anderson's and Owen Wilson's collective imaginations. We re-watched it minutes after ejecting the Rushmore DVD. The Tenenbaums are a wealthy family, who reside in a beautiful, multi-leveled house in an unusual New York City.

The father, Royal (Gene Hackman), finds himself involved, after a 20+ year separation, back in his home with his wife, Etheline (Anjelica Huston), and his three grown child prodigies: the financial guru, Chas (Ben Stiller); the washed-up tennis pro, Richie (Luke Wilson); and the adopted playwright, Margot (Gwyneth Paltrow). There is also Etheline's accountant and love interest, Henry Sherman (Danny Glover); Richie's best friend and Western novelist, Eli Cash (Owen Wilson); and Margot's neurologist husband, Raleigh St. Clair (Bill Murray). Where Rushmore has a more compelling story, The Royal Tenenbaums shows just how much Anderson can do as a director.

The movie is beautiful, the colors bright and vivid, the world of his imagination fully realized. It is, to me, at times very slow, though, and the dialogue is just not as memorable. It is also, however, incredibly funny and great to look at, and the cast of characters (and actors) alone makes it one of the greatest ensembles ever on film. 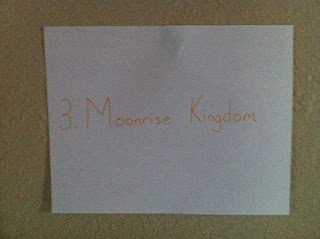 The day before our Wes Anderson mini-marathon. Amanda and I went to see this strange, unexpected gem of a comedy. I say unexpected because I was just a bit unsure as to how great it would be. What it does is offer the most true look at Wes Anderson as a filmmaker.

Where Rushmore lacks in a fully-realized vision and where The Royal Tenenbaums lacks in story, Moonrise Kingdom sort of fills in the gaps. It is the third great movie Wes Anderson has made. It tells the story of 12-year-olds in love on a small New England island town called New Penzance. Sam Shakusky (Jared Gilman) and Suzy Bishop (Kara Heyward) had met the year previous during a town school pageant. He, an orphaned Khaki scout, and she, an avid reader playing a raven in the play. We see this in flashback as they correspond and plan to meet and run away together. When they finally do, it is the most fresh and magical romance I've seen on screen in a long while.

It is incredibly ridiculous and funny as well. The cast of characters rivals The Royal Tenenbaums. Bruce Willis as Police Captain Sharp, tasked with leading the search party for the missing; Bill Murray and Frances McDormand as Mr. And Mrs. Bishop, Suzy's absent-in-plain-sight, attorney parents; Ed Norton as Scout Master Ward, the man guilted and motivated by his loss of a scout; Jason Schwartzman (in a brilliant cameo) as Cousin Ben, a Scout Master from a neighboring troop, who also officiates weddings; and Bob Balaban as the coolest movie Narrator of all-time. Anderson is able to use all his tricks and fill all the frames with his idiosyncratic details while, this time, maintaining a sweet, honest coming-of-age love story. It contains the truest young love scene since last years Terri. I couldn't believe I was seeing it. Amanda and I left the theater with wide smiles on our faces. She suggested we watch The Royal Tenenbaums. I suggested we watch Rushmore as well, so I could write this for you. 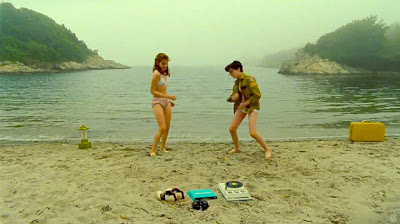 To sum it all up, ALL of Wes Anderson's films should be seen. The ones not mentioned as the greatest three are still great. They just miss out becuase, well, I just don't like them as much as these three. You very well may. They are all funny and interesting and great to look at.

Email ThisBlogThis!Share to TwitterShare to FacebookShare to Pinterest
Labels: The Best Movies