A Smile, A Hug, and A Thumps Up - Roger Ebert: In Memoriam 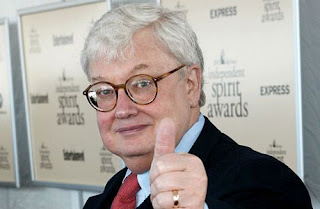 A Smile, a Hug, and a Thumbs Up - Roger Ebert: In Memoriam

When I was 14, I got the Internet at my house for the first time. At that very moment, I began studying under the tutelage of the best film critic ever (no argument), Roger Ebert. For 46 years, Roger wrote for the Chicago Sun-Times, devouring and critiquing over 200 movies every year. None of his words escaped me. His good reviews and his bad and even those I disagreed with all had one thing in common:  they brought a smile to my face.

One of our greatest agreements came with a movie, released in 2000 and which I just recently re-watched for the umpteenth time, called Almost Famous. In it, a young man with the writing bug gets a chance to be a rock critic for Rolling Stone Magazine. His review opens with an admission that he was "almost hugging himself" as he watched it. Yes. Those words from that very review stuck with me, and I often feel that when I watch the movies that I love most. That feeling and those like it are what make movies great. Mr. Ebert knew it, and I know it. In that we have something to share. I offer Mr. Ebert and his family a hug, a big one from East Tennessee over Kentucky across Indiana and into Chicago.

Roger Ebert loved to write, he loved to read, and he loved to watch movies. In him, I found an extra grandfather figure. A mentor. While I am saddened by the harsh fact that I will receive no new words of his to cherish, I am, at the same time, warmed by the beautiful truth that his words live in my mind, right here on my bookshelves, and out in the world for many more to look back on, respect, argue with, and love. In honor of one of my fallen heroes, I salute Mr. Roger Ebert with a trademarked "thumbs up."

Email ThisBlogThis!Share to TwitterShare to FacebookShare to Pinterest
Labels: In Memoriam