Random summer movie days "make the world come alive," to quote my old drinking buddy Zeb. Anything worth doing makes the "world come alive." The best movies to see on a hot summer day, for me, are not the billion-dollar action blockbuster superhero extravaganzas...no, not for me. For me, it's the comedies.

No all-out comedy was better in 2013 than the Seth Rogen-Evan Goldberg end of the world spectacular featuring some of the greatest cameos in cameo history known as... 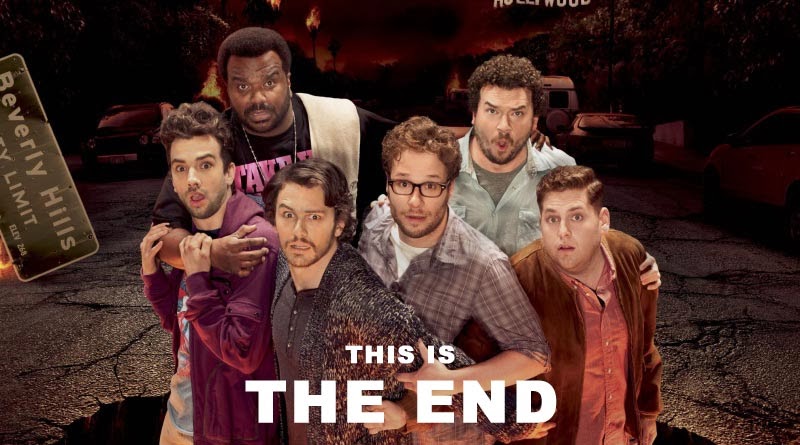 
The best part is that they play themselves. These crazy, odd versions of themselves. Don't they always anyway? That's what's so great about these guys. At some point in the past 10 years, the various casts of Judd Apatow's short-lived TV series (Freaks and Geeks and Undeclared) got involved with some North Carolina film school characters, including the likes of writer/directors Jody Hill and David Gordon Green as well as the actor Danny McBride and all became best friends. Two worlds unite:  dirty jokes meet dark comedy. With that formula, you end up with zany stoner comedies like Pineapple Express and strange, very dark comic fare like Observe and Report. Added to all that, just about every major comedy of the last 10 years can be degreed back to one of the guys in this movie. Think about it. Eat your heart out, Kevin Bacon. The new pawn in that game is James Franco, maybe even Jonah Hill. 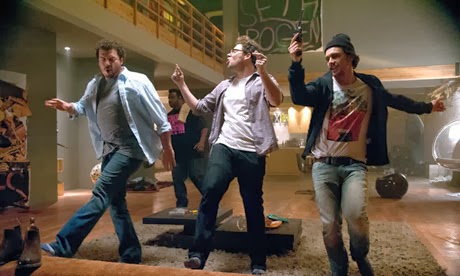 This is the End is the most original comedy these guys have done amidst a long list of original comedies. They push the envelope on bad taste, homophobic/erotic dude relationships, odd violence, drug use, and just plain meanness. Picture a scene where Danny McBride, playing himself, wakes up the next morning in Franco's house not realizing the world has essentially ended. He smokes most of the weed, cooks all the food, and drains all the water. Then, he makes fun of James Franco, also playing himself, to the point that its just plain mean. McBride is really the one they don't like. Or is it Jonah? Or is it Jay? Or is it Seth? Or is it Craig? Or is it Michael Cera? Yeah, he's the real jackass. 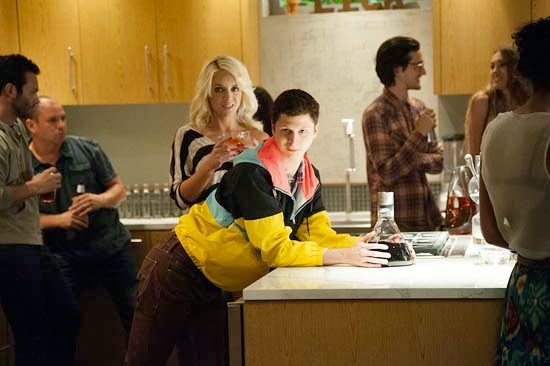 At the center of This is the End, though, is the relationship between Seth Rogen and Jay Baruchel (once cast-mates on the short-lived Fox series Undeclared). Jay is in LA for a visit. He hopes the two buddies will just chill and not get into much. Before you know it, Seth has Jay going to a lavish party at James Franco's mansion. Jay is uncomfortable, doesn't like these guys, is more of the odd man out as he doesn't live the "Hollywood life." Michael Cera shows up, as one of the at least a dozen cameos in the first 30 minutes of the movie, does blow off some chicks, and then rays of light start pulling people out of the sky. The world is ending.

Back at Franco's, it is survival mode. Lock up, take stock of the inventory, figure out what to do. There is demon possession, talk of possible attempted rape (much to Hermione's chagrin), jealous rages, axes and firearms, pee and fart jokes, blood spatters, discussions of religion, Craig Robinson's shrill scream, apocalypse, post-apocalypse, and a bright white backstreet version of heaven. 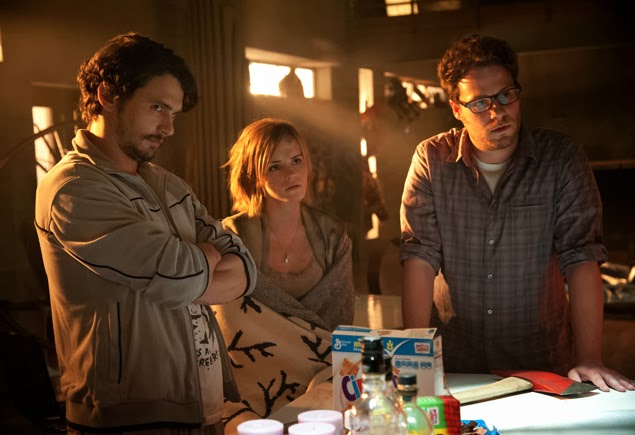 This is the one of the strangest movies I've ever seen (if my review is some indication). I can't and won't describe its plot (or lack thereof). What I will do is tell you that the crew of comics that made this movie are some of the most creative people of my generation. I have enjoyed growing up with these guys. I recommend just about any of the movies involving any of these actors despite the fact that I just can't keep up with Franco. To digress (and give some perspective), James Franco was featured in 14 movies in 2013 while directing two adaptations of William Faulkner novels (As I Lay Dying and The Sound and the Fury) and one of Cormac McCarthy's (Child of God). Having given you that, I can't help but list this movie in my top five. These guys have gotten to a place where they can do anything they want, and I thank all that is good in the world for that. I couldn't get the smile off my face when I left this movie. It was as if I woke up and rocked it with McBride and then called Franco a "queer" and grabbed a weapon and defended myself against the demons. 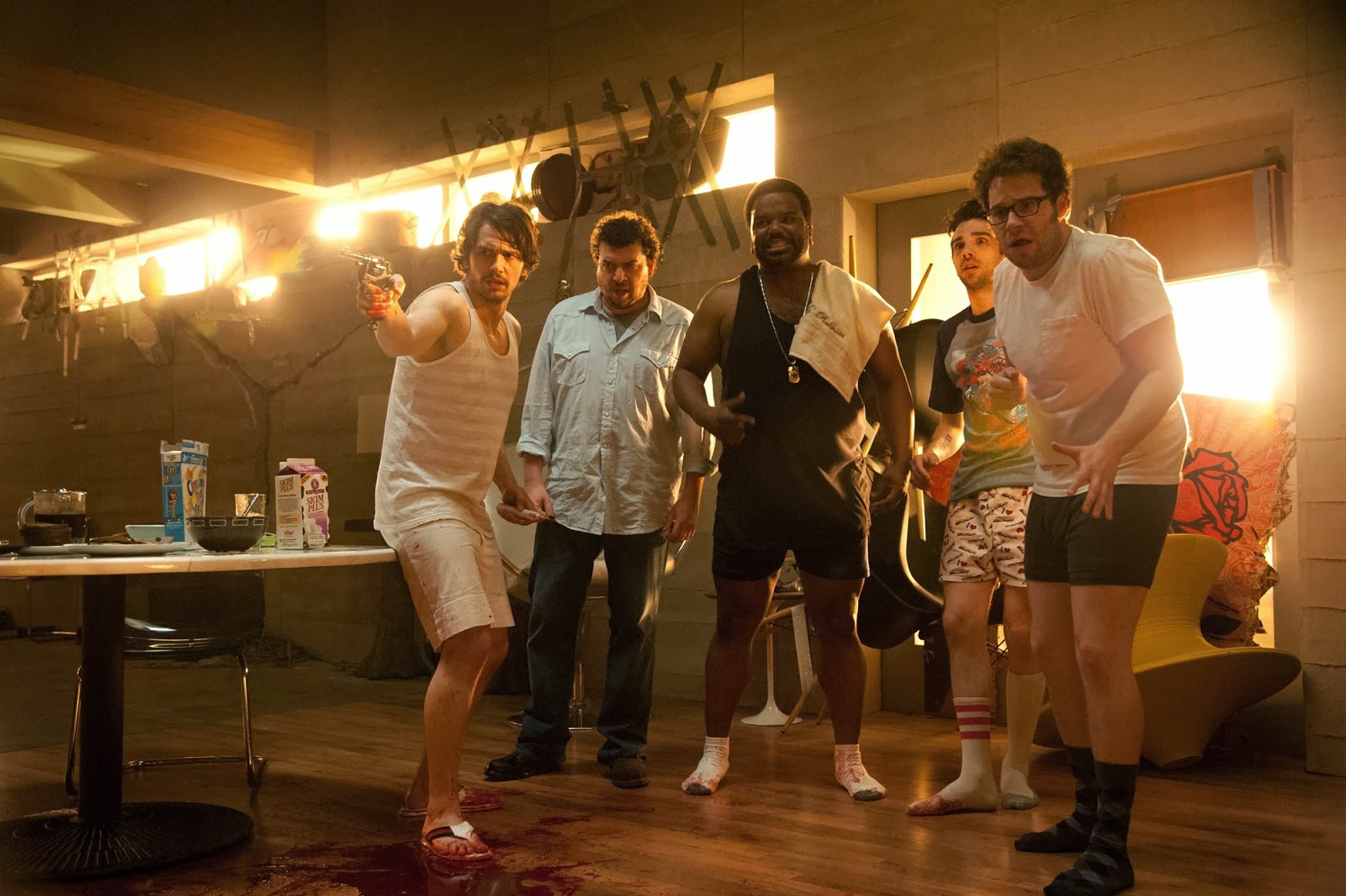 I'm listening to Mozart right now, by the way. 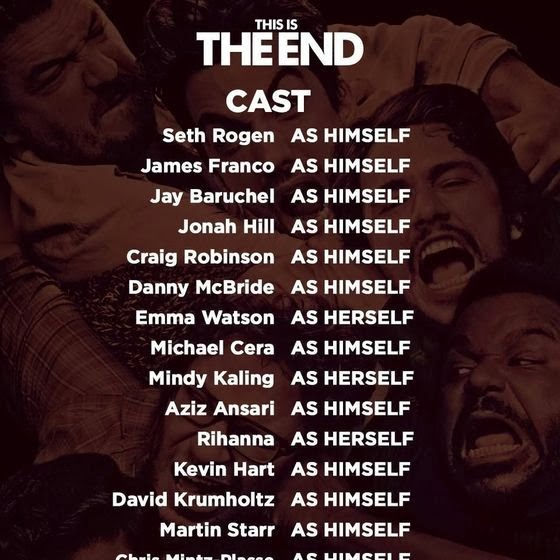