In recent days, I have watched several films of great depth and magnitude, completely different in every way. All were released in 2012. All were on my radar, yet I happened to miss them in theaters.

For Part I of this multi-part series, I shall discuss the one I truly regret missing on the big screen. It is a film meant for a theater, beautifully shot on the rarely used 70mm film...real actual film. I have struggled with how to approach writing about this one. It is so full and dense, yet I'm not sure (even now) if it's actually a good movie. 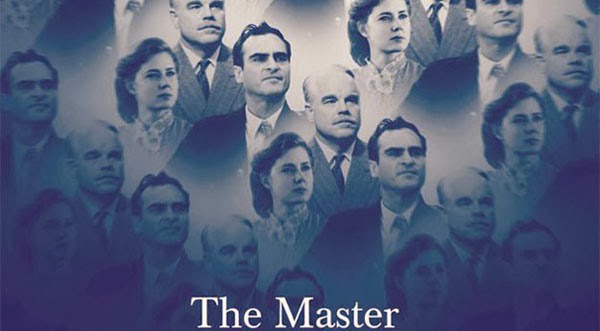 Paul Thomas Anderson's The Master is a movie of so many questions. At times, I wasn't even sure what was happening. It is slow and too long. It lingers, though, in my head. It features striking imagery in its cinematography. It is a masterful sight to see from a masterful filmmaker, yet I'm not sure it ended up being the movie that was originally envisioned when initially conceived. The performances from the three leads are some of the best in any movie I've seen. How can a movie do everything right, as far as the craft of movie-making goes, and just not be effective? I blame post-production on this one. I think it could've been a great follow-up to Anderson's incredible There Will Be Blood (2007). It certainly has a similar tone and look. It also has that same sort-of haunting music from Jonny Greenwood (of Radiohead). It's just not there in the end. 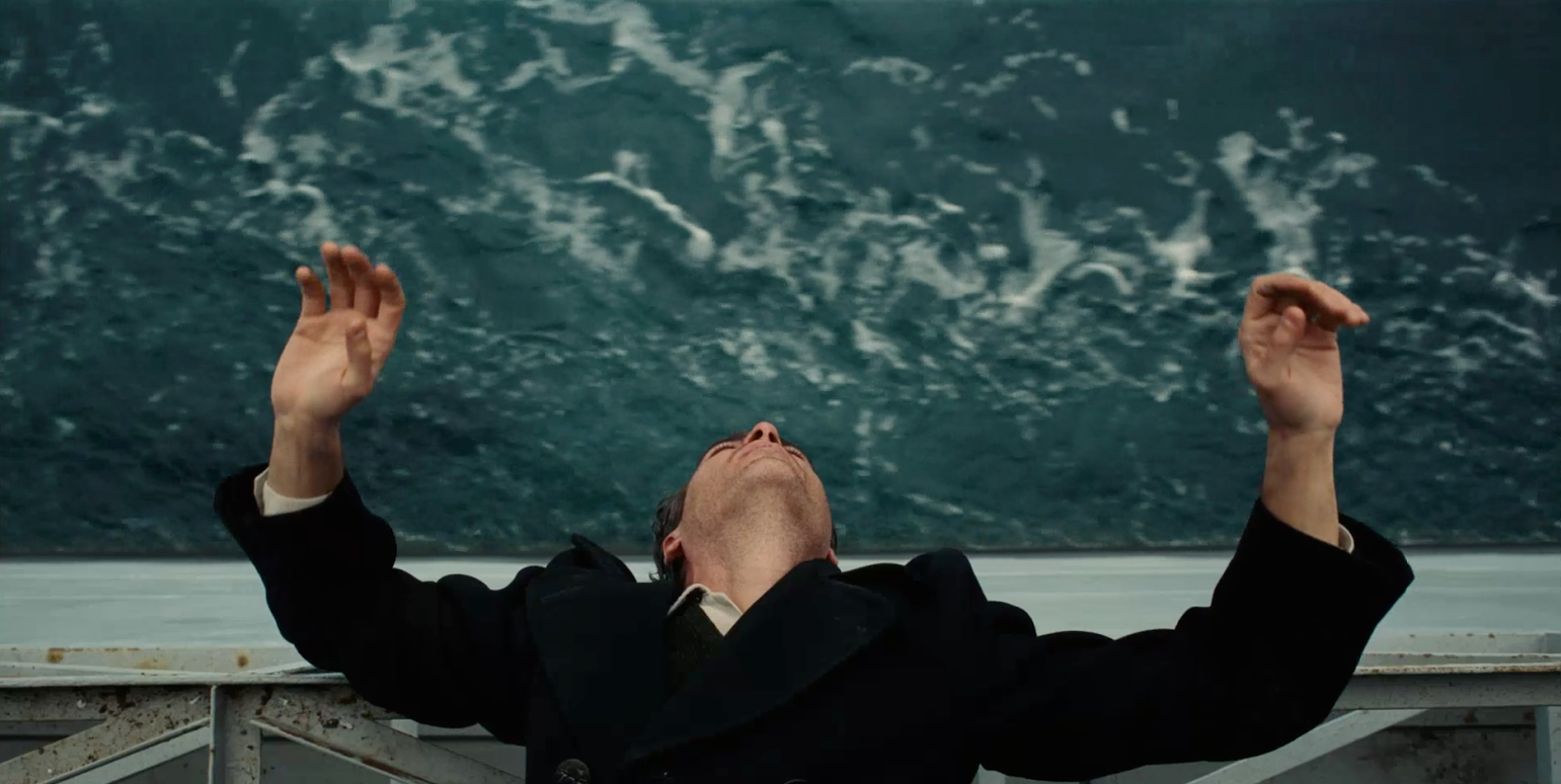 The Master stars Joaquin Phoenix in his first role after the odd "I'm quitting acting to pursue a hip-hop career" put-on he did for the fake documentary I'm Still Here. He is brilliant. A true actor. His performance fills every inch of him. He is the odd, alcoholic WWII vet Freddie Quell. You believe every bit of his disturbed sensibility right down to the way he stands and walks and holds his arms and talks out of the side of his mouth. 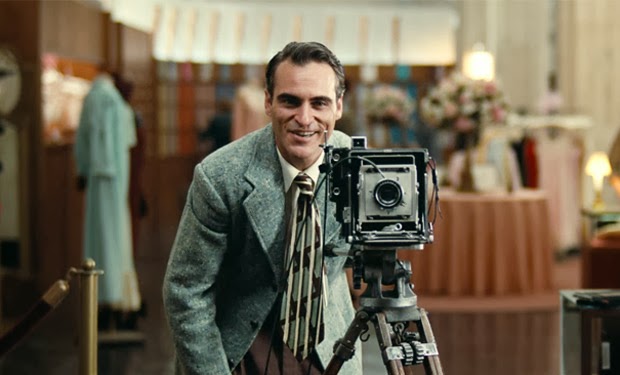 After the war, Freddie finds himself out of place. He tries different jobs. Early in the film, he takes a job as a department store portrait photographer. He is unstable, odd. He mixes up strange concoctions of various chemicals and poisons and drinks them from a flask. He gets really drunk. After accosting a customer during a photo shoot, the film flashes to his next venture as a farm hand in Salinas, a cabbage picker. After an old man gets ahold of his potent hooch and nearly dies, Freddy flees, staggering down the docks and stumbles upon a yacht. The yacht is housing a party, the wedding of the daughter of a man named Lancaster Dodd (Philip Seymour Hoffman). Dodd is a up-and-coming religious figure. He is a self-proclaimed "nuclear physicist and theoretical philosopher." He is obviously modeled after L. Ron Hubbard (writer of Dianetics and creator of "Scientology"). Dodd and his wife Peggy (Amy Adams) take the man into their world of healing (referred to as "The Cause"). Freddie becomes part of the cult that has begun to gather. Then, the real questions start flying. 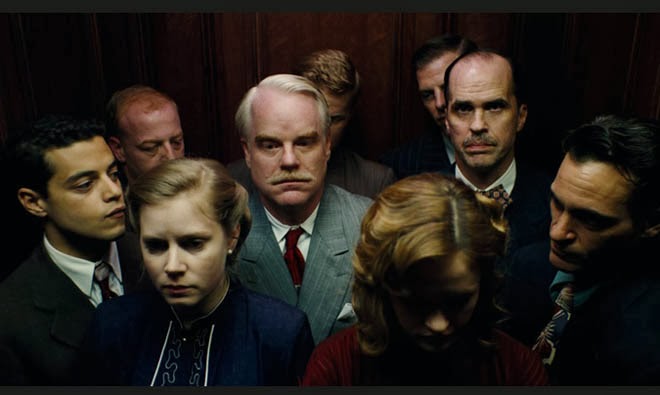 There is an early scene, an interview between Freddie and Dodd, that is one of the best directed and acted scenes I can recall in any movie. Dodd fires away question after question refusing to allow Freddie to blink or they start over. Things about his past, his future, his fears. See, Dodd's philosophy is that all things are connected through time, outside of your physical being. Your fears are the fears bred into you by millions of years of evolution. Freddie is an animal. He is irrational and violent and afraid. Dodd finds in Freddie a challenge. He must have thought Can I tame him? Can I heal his pain? Can I help him erase the horrors he faced in the war? In his childhood? 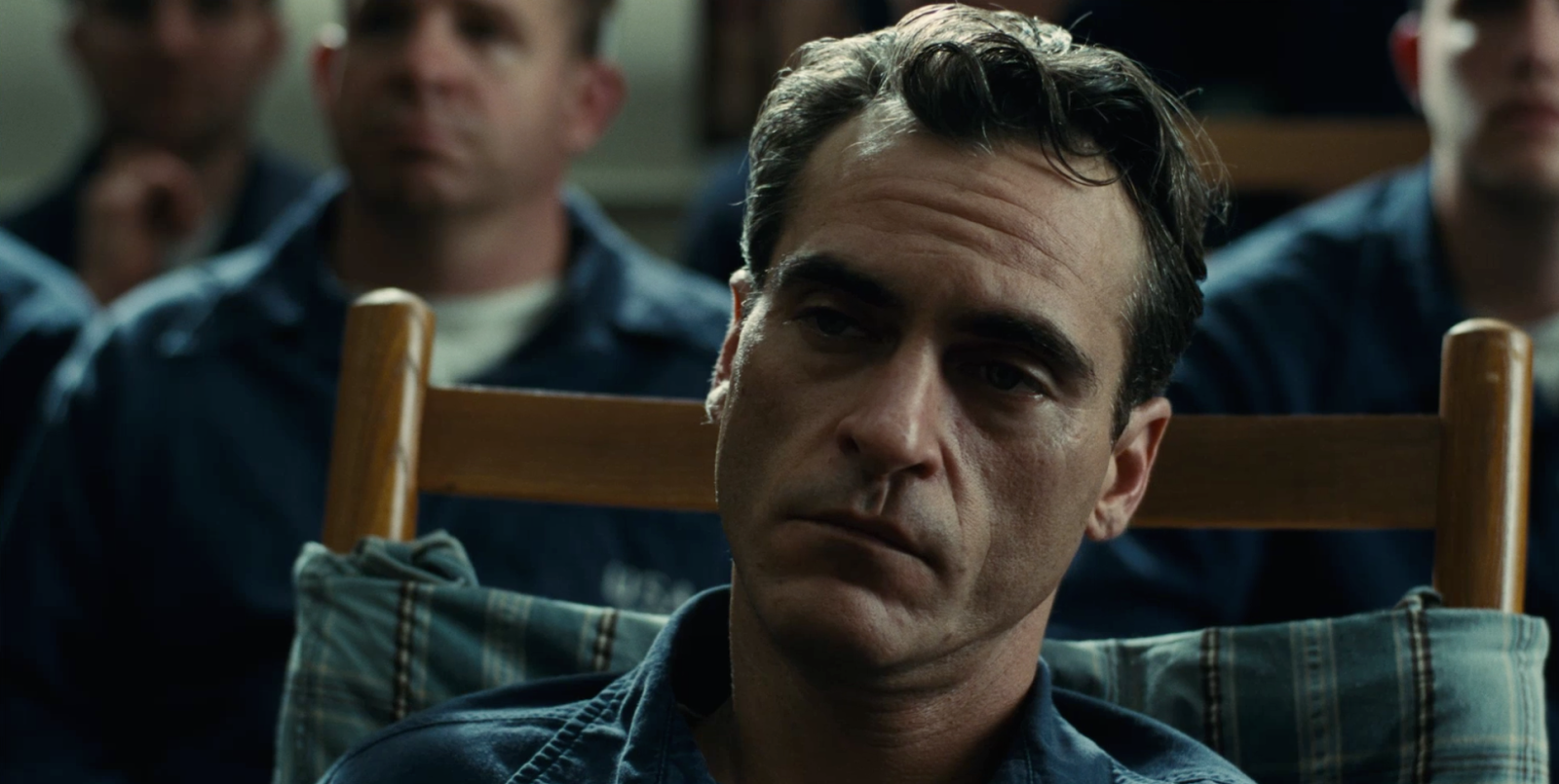 Another great scene between the two male leads takes places later as they are both jailed. Dodd for a sort of fraud and Freddie for attacking the police officers there to serve their warrant.

Dodd: Your fear of capture and imprisonment is an implant from millions of years ago. This battle has been with you from before you knew. This is not you. 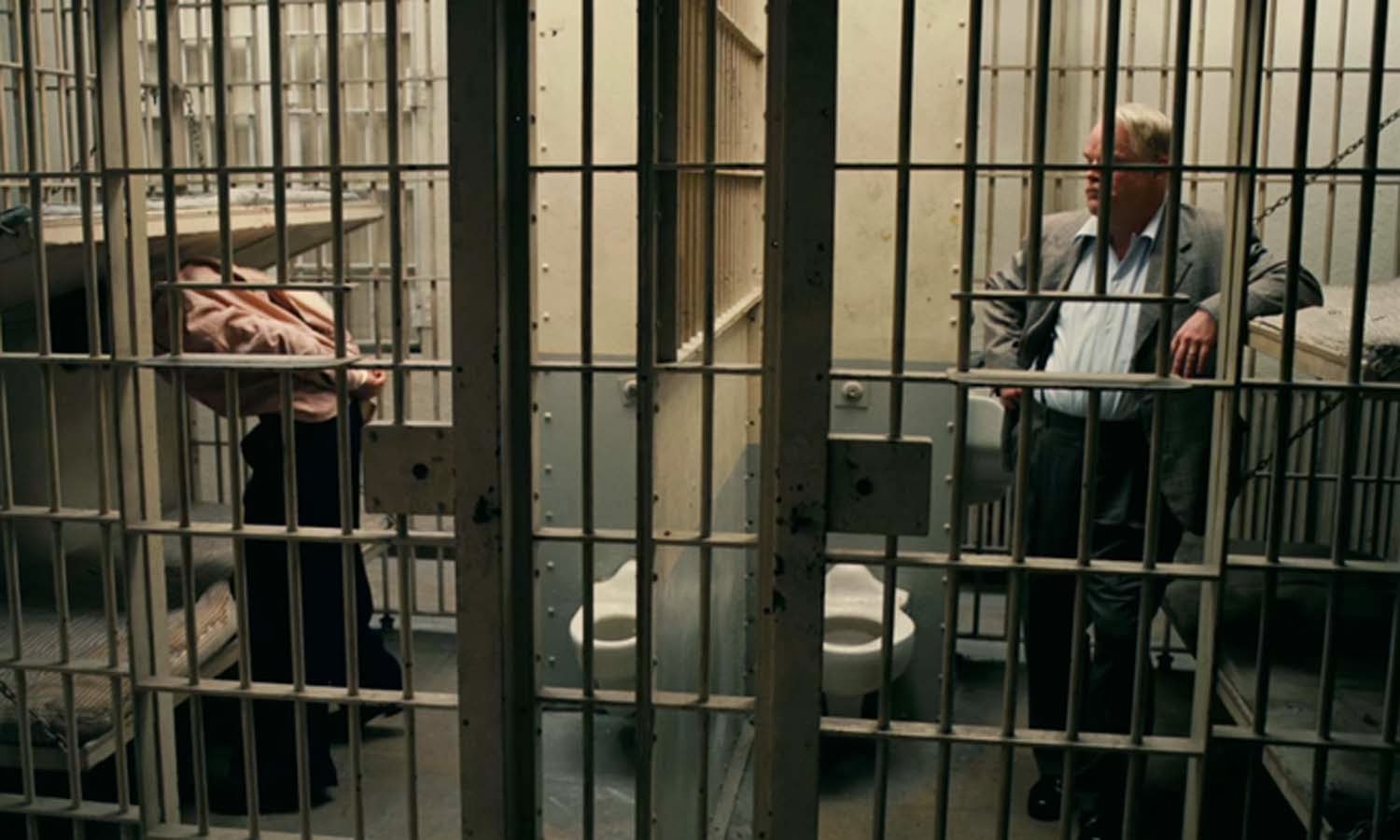 Part of Dodd's belief system is that "Man is NOT an animal." Yet Freddie is. And Dodd is. And everyone is. What about sexual desire? Dodd has it. Freddie has it. It is clearly seen in this film in surprising scenes that I won't even hint at. What about mental illness? Freddie is certainly mentally ill. As Peggy puts it, when trying to sway Dodd to cast Freddie out, "Maybe he is past help...or insane?" As Dodd begins to put Freddie through a series of tests all I could think was Is this religion or psychotherapy? Now, I'm wondering to myself, Is there a difference? 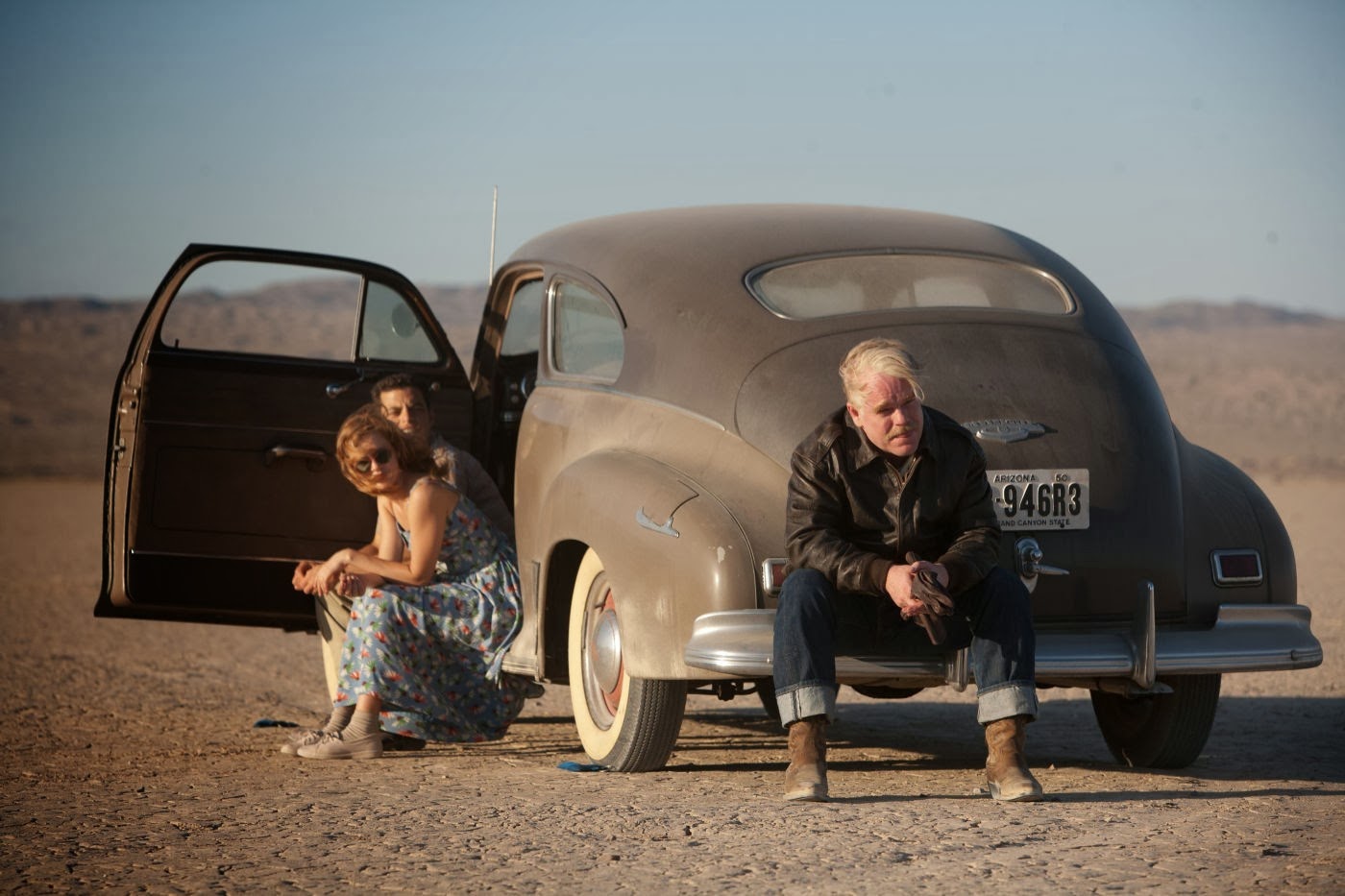 These are the struggles I had with this movie. It is all contradictory. Maybe that's Anderson's point here. Is religion inherently crazy? A man like Dodd, or an L. Ron Hubbard, believes he can simply create his own philosophy and call it religion. People will follow it like anything else. At one point, Dodd's son, Val (Jesse Plemons), points out to Freddie one simple idea:  "He's making this up as he goes along. You don't see that?" We see what we choose to see. Freddie needed somewhere to belong. He left the war a broken man, physically and mentally. Whether "The Cause' was his answer or not, we must find out for ourselves.

**Request: I invite anyone reading this and willing to watch this movie. I want to hear more thoughts on it. Is The Master a masterpiece? In the end, it seems too unclear for me to decide. It certainly looks and feels like one. I'm just not sure.