Take Me Back to the Start: A Look at HBO's True Detective 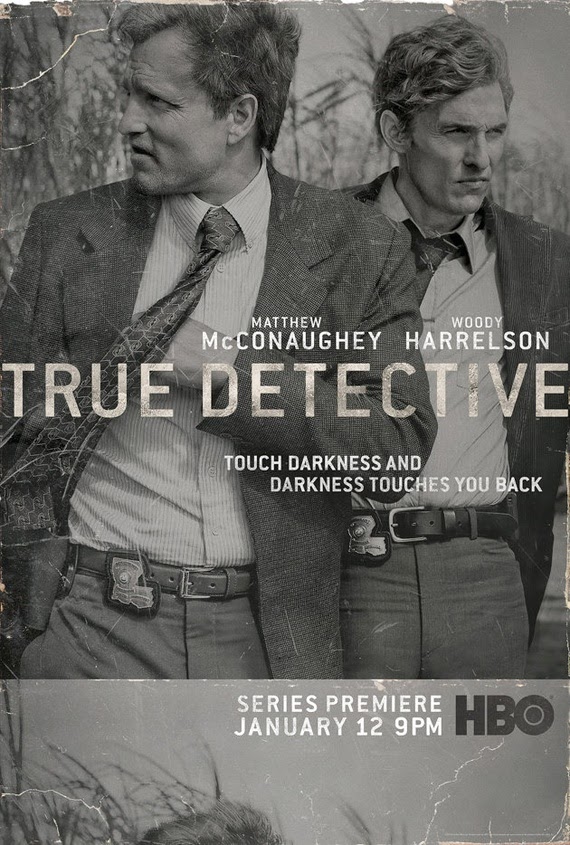 Well, what you've all heard is true, especially those of you who haven't seen it, True Detective is the most important piece of television since The Sopranos. So much so that it has given us a newish concept: The Anthology Series. That is, McConaughey and Harrelson will not do a second season. A second season will happen with different actors in a different place at a different time. This was a "finite thing" as McConaughey told Rolling Stone in a post-Best Actor Win interview. (By the way, you can expect a post-Emmy for Best Lead Actor in a Drama Series interview and statue in his Texas home come Emmy time. This is his finest work, even finer than that in Dallas Buyers Club. Who would've thought? Matthew "they stay the same age" McConaughey is one of the finest dramatic actors of his generation.) What a world all this opens up to HBO, to TV fans, to film fans, to true crime fans, to life itself. True Detective is just that good. 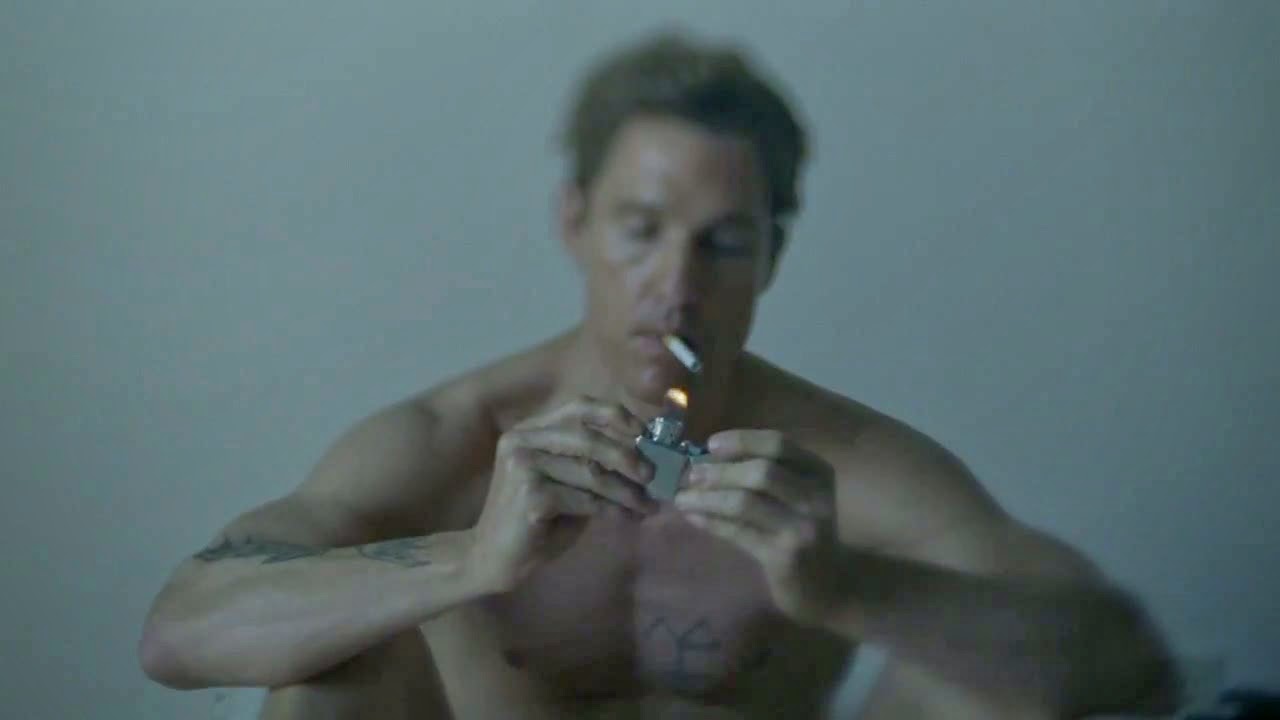 The "anthology" set-up allows for a full story to unfold. Yes, that silly plot diagram they taught you in middle school (see Figure A). All of its parts get filled in. The exposition, the rising actions, the shocking climaxes of episodes 4-6 (the three greatest TV episodes ever made), the falling action, the slow denouement in which a little light is finally brought into the darkness...literally. It is a sight to behold. It will be talked about for years. It will never be matched unless writer-creator Nic Pizzolatto and director Cary Fukunaga somehow outdo themselves in a second season. I was upset when this past Sunday night came and went without more. The story is over, but I want more.


I've decided to start at the end, discussing (lightly) each episode one at a time framed with its title and a quote from Rust Cohle (McConaughey). His now-famous soliloquies are, after all, one of the greatest aspects of this show's wonder. So, here it is:

Form and Void - "Once there was only dark. If you ask me, the light's winning." 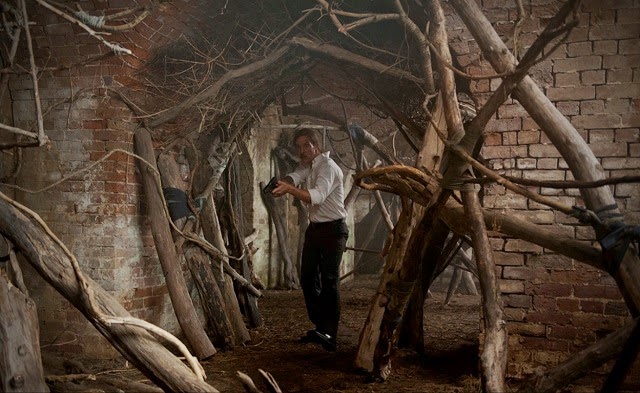 Two middle-aged detectives have found their man after 17 years. They are both injured, nearly fatally. They look into the night sky speckled with tiny bits of light, stars, Marty Hart (Woody Harrelson) and Rust Cohle (Matthew McConaughey), and Cohle finally spills it. He is tortured by a tragic past (now 25 years gone). And he let's out with it. The Yellow King is no more. The sadness is lifted if only a little. The denouement.

At first, I felt unsatisfied. Like it was too easy. Too "light" if you will. But perhaps that's the way of things. When you journey so long and hard into torture and pain and tragedy, darkness, the end must have at least a touch of light.

After You've Gone - "Life's barely long enough to get good at one thing. So be careful what you get good at." 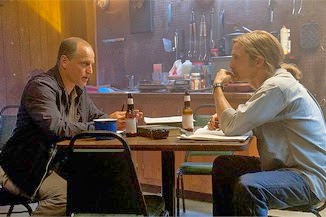 That Rust Cohle is such a great detective is not lost on him, or anyone else. The fact is that it's the year 2012, and he hasn't been official police for 10 years. At this point, neither has Marty. He left the Louisiana State Police CID Unit as well for the private detection world. A bit easier to stomach than being the murder police. After all these years apart, Hart lets Cohle back into his life (not really by choice, but sort of), and the hunt begins again. Cohle knows that the "man with the scars" did it. And he knows what was done. He also knows that it goes all the way to the top, to the State House, where a man named Tuttle sits, his long line of relatives into some high cultish religious stuff. It all has to do with young children, ceremonial religious sacrifice, etc. It is "deep and dark" as Cohle says previously. There is a videotape. Its contents can only be guessed at. It plays two times. Both times, it makes grown men cry and scream. The clues are all in place thanks to some shifty work at the CID offices. The falling action.

Haunted Houses - "Without me, there is no you." 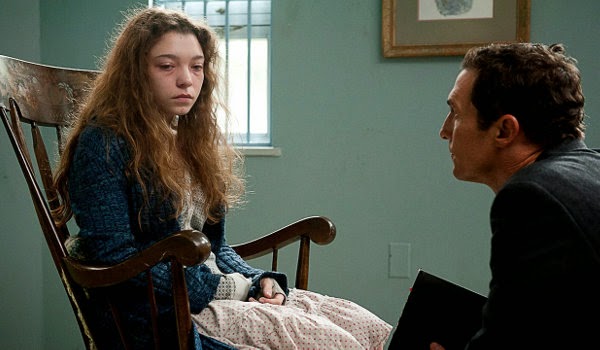 2002. The falling out. Two detectives, working cases together for 7 years. Cohle knows he's the best, better than Marty. He keeps thinking that maybe back in 1995, they didn't get their guy after all. He keeps hearing about "The Yellow King." A "man with scars." He remembers things that aren't working out. He remembers the victims' names, Dora Lange, Marie Fontaineau, etc. He sees their faces. He is obsessed. One of the more shocking twists in this or any other television show is found in this episode, perhaps the darkest of the season. Hart and Cohle finally have it out. Cohle has already quit. He disappears.

If it seems as if I'm telling you too much, that's the beauty of True Detective. I could never say enough. I haven't even hinted at anything.

The Secret Fate of All Life - "So Death created Time to grow the things that it would kill." 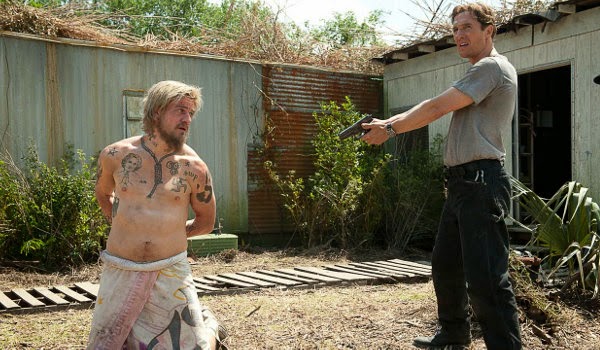 2012. Two middle-aged detectives sit in separate rooms being questioned about what they know about a man named Reggie Ledoux, a man they pegged as the murderer they were after, the killer of Dora Lange, and possibly others.

1995. The scene of the crime. The man Hart and Cohle have been looking for is found way out in the sticks. He is a meth cook, who also dabbles in LSD. A bad man. The victims all have these two drugs in their system. This is their guy. This is the most shockingly unexpected and violent thing I've seen on television.

The middle of this episode (right in the middle of our middle school plot diagram) is our climax. Then, this show frees itself from time altogether for the next episode and a half. It is one of the most astounding things I've ever seen. If I remember correctly, I sat with my mouth gaped open, my eyes glued to the screen, and did not move a muscle for the last 30 minutes of this episode.

Who Goes There - "So, enough with the self-improvement-penance-hand-wringing shit. Let's go to work." 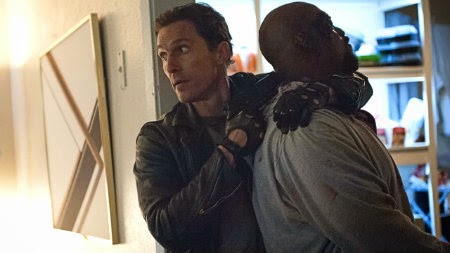 2012. Two middle-aged detectives sit in separate rooms being questioned about what they know about the case so far. The murder of Dora Lange. The procedural.

1995. In which Hart and Cohle catch wind of the involvement of a Texas biker gang into the meth game. Hart's marriage to Maggie (Michele Monaghan) is on the rocks. Cohle decides to go undercover. Hart will be the getaway driver. Cohle gets in with Ginger, one of the biker thugs. They go to rob a stash house in a black gang-ridden housing project. He is coked out of his mind. He is intense. The final 7 minutes is one unbroken shot in and out of houses and across yards and streets with gunshots to the heads, blood aplenty. It is the most technically sound sequence ever shot for television, and recent film history period, for that matter. It put this show on the radar of cinephiles and TV fans alike. It is glorious.

The Locked Room  - (see below) 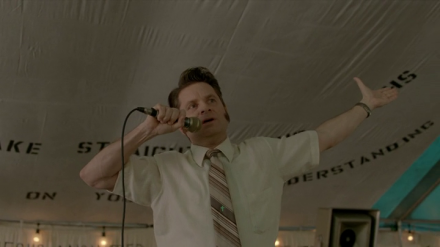 2012. Two middle-aged detectives sit in separate rooms being questioned about what they know about the murder investigation of a woman named Dora Lange. Rust Cohle is pony-tailed, mustachioed. He looks rough. He takes long drags from his Camel Blues. He drinks Lone Star tall-boys, cuts the empty cans, and makes standing stick figures. He is haunted. He says, "To realize that all your life, all your love, all your hate, all your memories, all your pain, it was all the same thing. It was all the same dream, a dream that you had inside a locked room, a dream about being a person. And like a lot of dreams, there's a monster at the end of it."

1995. The camera glides over a small grassy hill. It slowly zooms in to reveal a man shirtless in his underwear wearing a gas mask. That shot from all the previews you've seen for months as you watched Boardwalk Empire has finally come. And True Detective has truly begun. The rising action begins.

Seeing Things - "I can't say the job made me this way. More like me being this way made me right for the job." 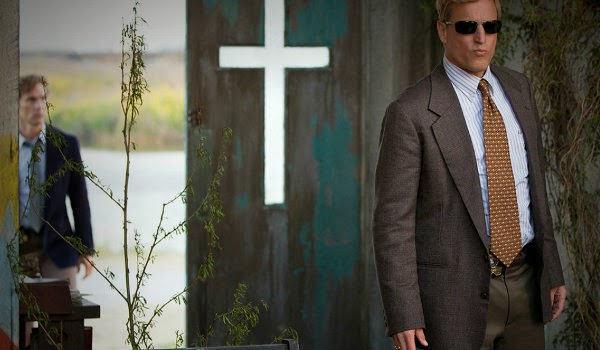 2012. Two middle-aged detectives sit in separate rooms being questioned about what they know about the murder of a woman named Dora Lange. Marty Hart wears a suit in his interview. He is mostly asked questions about who Rust Cohle was as a person. Hart only knows him as a great detective and an enigma.

1995. Two young detectives chase leads based around symbolic wooden stick figures found here and there. Deer antlers, creepy stuff. Newly partnered together, they have a hard time getting along. Hart is the straight family man with a younger woman on the side. Cohle is a tortured soul. He is philosophical. He has problems with drugs and alcohol. He gets to know Hart's family, a wife and two daughters. He likes them. Hart doesn't trust Cohle around his wife and kids. Maggie, Hart's wife, has a soft spot for Rust. He needs love in his life, a woman perhaps. The two find a strange piece of graffiti on an abandoned church wall. Cohle sees visions, has hallucinations. The mood is set. The exposition continues.

The Long Bright Dark - "I think human consciousness is a tragic misstep in evolution. We became too self-aware, nature created an aspect of nature separate from itself, we are creatures that should not exist by natural law." 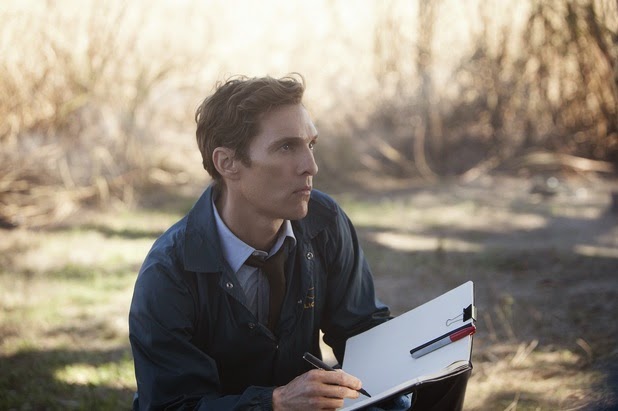 2012. Two middle-aged detectives sit in separate rooms being questioned about what they know about a murdered woman named Dora Lange found posed on her knees in front of an old live oak. She has deer antlers on her head. Two younger detectives question Cohle and Hart separately. They have the pictures, the case files. They have a new murder that suggests some similarities to Dora Lange.

1995. Two young detectives recently partnered together share an uncomfortably silent ride to a crime scene. This new detective to the Louisiana State Police CID, Rust Cohle, is odd. He makes Marty Hart uncomfortable. They find the body. This odd new detective keeps a notebook, a full large notebook. The other detectives at the station-house find this strange, they find him strange. They make fun of him. He doesn't take notes. He draws pictures, very detailed pictures.

From the moment the opening credit sequence begins with the haunting song "Far From Any Road" by The Handsome Family, you are hooked. This show is Southern Gothic Literature to the max. It is true crime like you've never seen. It is literary. It sticks in your mind and possesses your soul. It is unlike anything I have ever seen.

Email ThisBlogThis!Share to TwitterShare to FacebookShare to Pinterest
Labels: The Tube