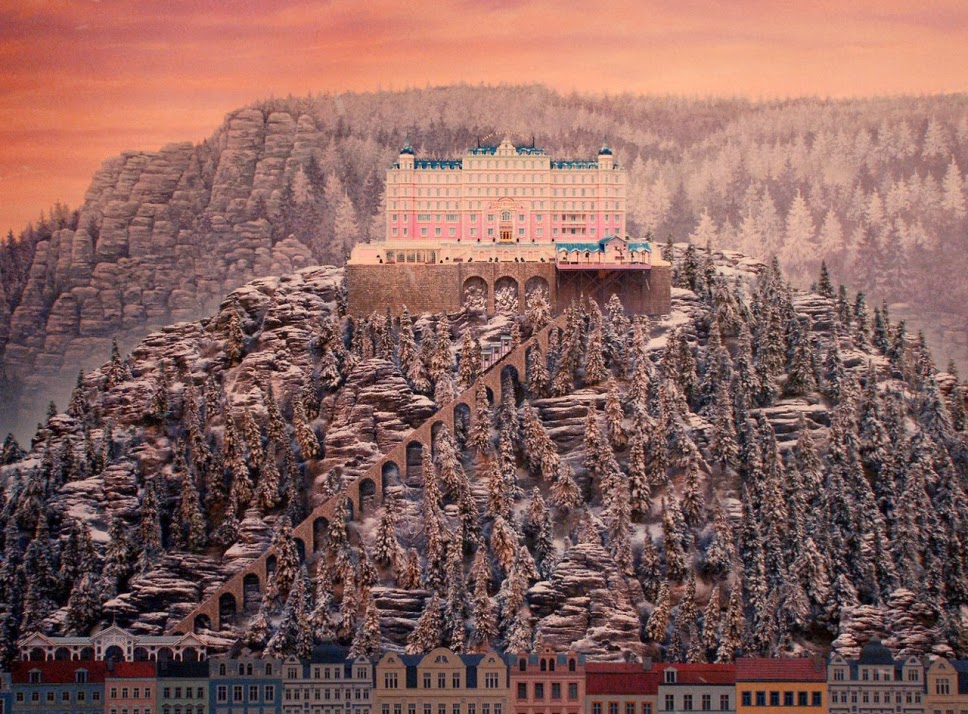 In The Royal Tenenbaums, Wes Anderson opens with a shot of a book called, well, The Royal Tenenbaums, the camera hovers directly over the top, perfectly centered as the prose written on its first page is read by the Narrator (Alec Baldwin). That opening ranks among the most memorable of any movie for me. And the story-of-a-story, or story-within-a-story, is a motif running through several of Anderson's movies, including The Fantastic Mr. Fox (based on a Roald Dahl children's book) and now, his latest, The Grand Budapest Hotel.

The idea of story-within-a-story is brought fully and clearly to life in Anderson's latest film, The Grand Budapest Hotel. With this one, Anderson does something I've never seen, out-doing himself, and many others who try this idea. Here there is a girl, somewhere in Europe, visiting a graveyard, a statue of an writer, she holds his book, The Grand Budapest Hotel. It is the 1980s. The film then cuts to Author (Tom Wilkinson) talking to a camera. He is filming promotional material for the book. This era (the 1980s) is shot in a widescreen standard 35mm aspect ratio of 1.85:1.

The Author's story then travels back in time to the 1960s, where Young Writer (Jude Law) is at the old, broken down Grand Budapest Hotel, modernized from its glory days in the 1920s and 1930s. He sees an old man sitting there in the lobby. Who is this guy? The concierge M. Jean (Jason Schwartzman) tells him it is Mr. Moustaffa (F. Murray Abraham). In the renowned Turkish Baths of the Grand Budapest, Young Author happens upon Mr. Moustaffa again. He is curious about the old man. Mr. Moustaffa invites Young Author to dinner where he will tell his story. This era (the 1960s) is shot in anamorphic 35mm widescreen, 2.35:1.

Mr. Moustaffa's story (narrated in F. Murray Abraham's oddly flat voice) will take up the better part of the running time. He tells the story of how he became the right hand of the greatest concierge the Grand Budapest had ever seen--M. Gustave H. (Ralph Fiennes), a smooth-talking yet long-winded lover of all, including the octogenarians who frequent the hotel. It is 1932 and the fascist regimes of Europe are beginning their takeover. This era (the 1930s) is shot in the original 35mm silent film ratio of 1.33:1. 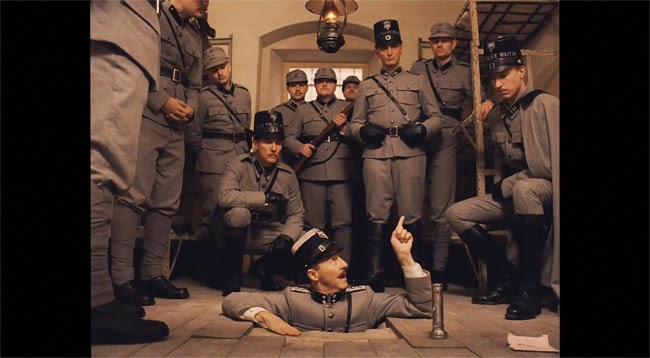 To summarize (thus far), there is a girl who loves a story written by a guy shooting a promotional film from his home, who, in the 1960s, met a man who worked for a great concierge in a 1930s hotel. A story-within-a-story-within-a-story-within-a-story. I recall reading something about The Grand Budapest Hotel as one of the Russian nesting dolls. Great description! Wes Anderson is no doubt a born storyteller. He weaves details among details through shot after shot, filling every frame with things that just astound the viewer. In this one, his 8th feature film, Anderson accomplishes his greatest feat. He brings his eye for detail, his love of narrative, and the joy of live-action animation together. Is this the greatest of Anderson's work? Not for me, but that argument could certainly be made.

I don't want to offer any more details about the plot of this film. I will only add that Mr. Zero Moustaffa, at some point, became the owner of The Grand Budapest, rising as a young teenaged Lobby Boy (Tony Revolori) into the right hand of Gustave H, who becomes embroiled in a whodunit after one of his elderly lovers dies mysteriously during the final years before Europe would crumble during WWII. It, like all of Anderson's films starting with The Royal Tenenbaums, has one of the greatest ensemble casts of characters ever created and assembled. In addition to those already mentioned, here are a few names: Adrian Brody, Bill Murray, Harvey Keitel, Willem Dafoe, Jeff Goldblum, Edward Norton, Owen Wilson, on and on and on. Every performance, even those that take only 30 seconds of screen time are perfect. 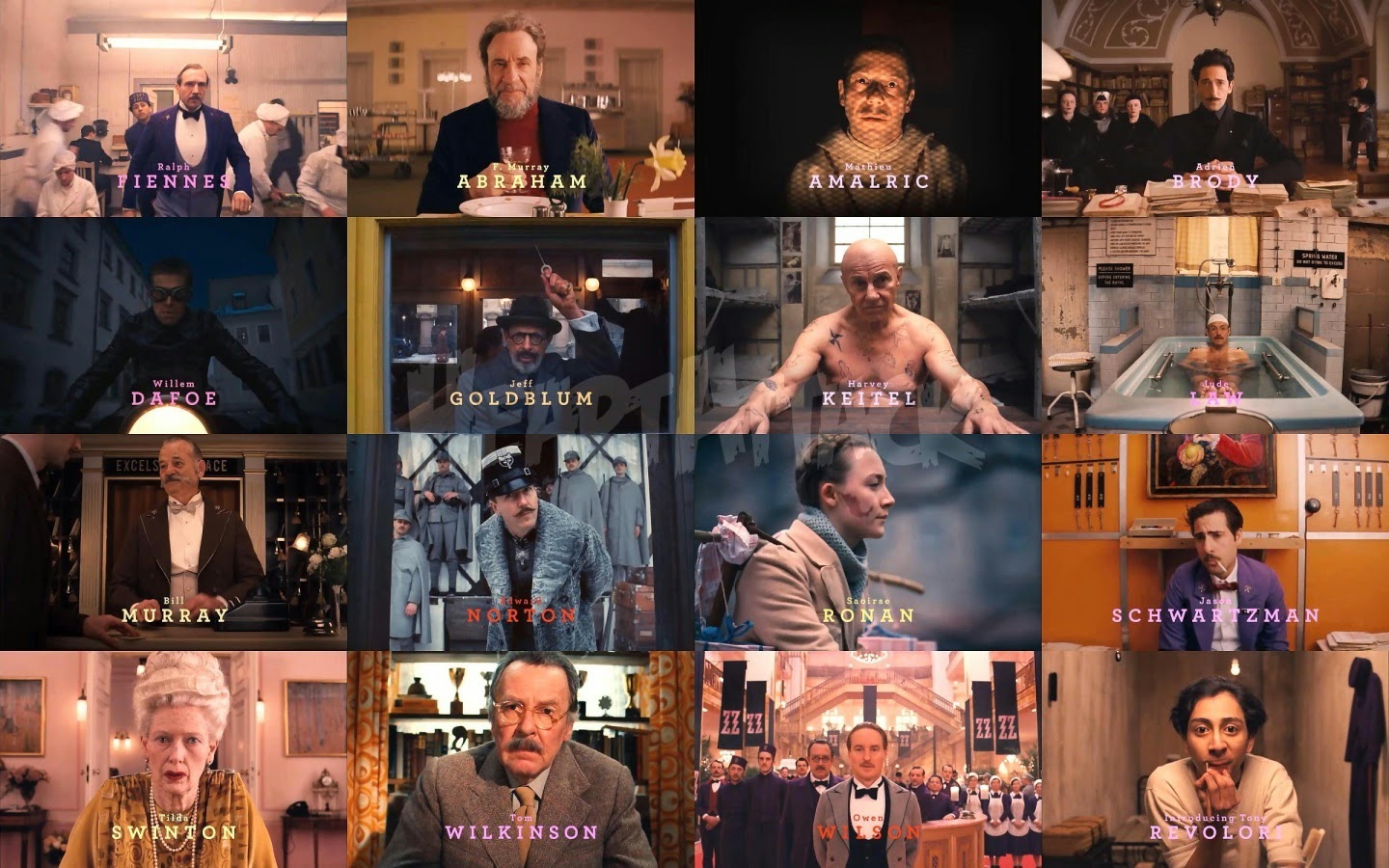 I went to such great lengths earlier to describe the shifting time period aspect ratios because it is proof of the idea that Anderson's work is so great with each subsequent movie due to the addition of new tricks with each one. Wes Anderson is well-known for the distinct look and style of his movies. This one is Wes Anderson to the max. 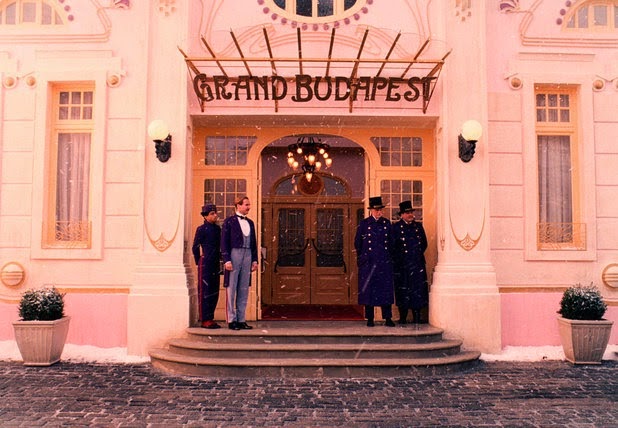 Apart from the genius time-period shifts, The Grand Budapest Hotel contains two other noteworthy differences from anything else in the Wes Anderson filmography:  violence and action set-pieces. Now, this is not to say that there hasn't been violence or action in his movies before. The Life Aquatic with Steve Zissou has plenty of both. However, the way Anderson treated the violence in this movie seemed so real to me. At the same time, the action sequences seemed so obviously animated. Almost as if Anderson made a stop-motion animated movie with real actors. Here's what I mean: there are two scenes that stand out. The first one is a prison break sequence in which the camera follows four escapees in and out of windows down narrow shafts through tunnels and up through a manhole. It reminds me so much of a similar scene in Anderson's fully-stop-motion animated feature from 2009 The Fantastic Mr. Fox. Another scene is even more "animated." In the climactic action sequence of the film, Zero and M. Gustave chase the villainous Jopling (Willem Dafoe), in a sled down a steep Alpine slope. The camera is far above the action. Jopling (on skis) and the two heros (on sled) rush at cartoonish speed down the mountain. Close-ups give us the actors bodies and faces, but from above its like something out of a great animated movie. It becomes something new to add to Anderson's book of tricks. For a lover of movies, it doesn't get any better than seeing a great filmmaker just master his form, his vision coming to life. 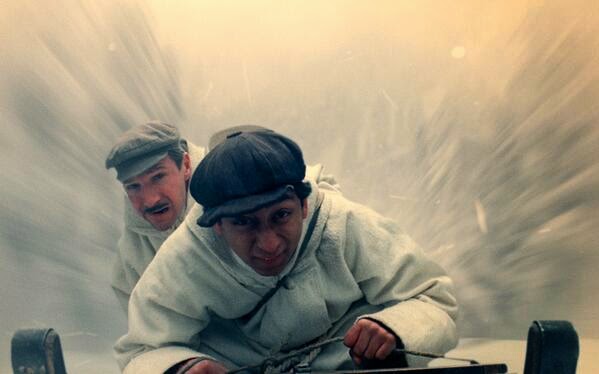 Above all, The Grand Budapest Hotel continues Wes Anderson's quest to find the perfect balance between story and style. It is of the best narratives he's ever spun (see: Rushmore, The Royal Tenenbaums, The Darjeeling Limited, and Moonrise Kingdom). I laughed, my heart was warmed, and I instantly wanted to see it again. Perhaps the greatest thing about Wes Anderson (and the reason he is my favorite director) is that his movies don't only reward repeated viewings but demand them. The details that fill every frame are pure imagination captured on film, and I can't wait to watch every single one them again and again.