The Place Where Dreams Come True 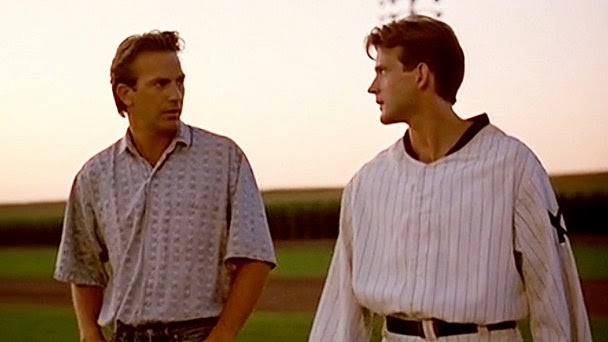 "It's the game my father taught me how to play." - Billy Crystal (in an interview for Ken Burns' Baseball) 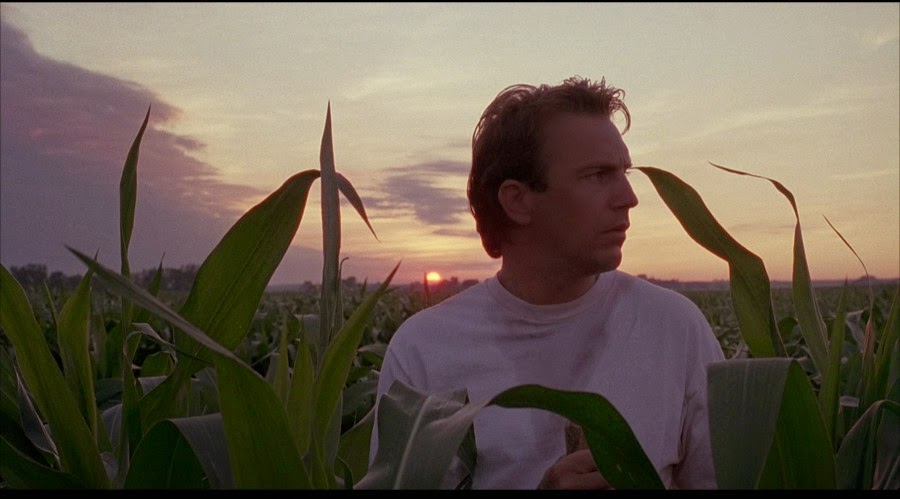 Baseball is the game every boy's father taught him how to play. Even if your father is, say, more of a football fan, you know the game. We all know the game. We know it because, more than any other game, baseball is inside us. To be very clear: I haven't played catch with my Dad in I don't know how long, yet every time I toss a ball to someone else and that person tosses it back, I feel nurtured. Baseball, after all, is a nurturing sport. In the mid-1800s, before baseball became Baseball, Walt Whitman, in all his grand poetic glory, described it as a way to overcome the trials of adulthood and encouraged all to "fill their lungs with oxygen" in a field with a glove and a ball. Baseball is one of our forefathers, the ultimate father figure. Phil Alden Robinson's Capra-esque 1989 film Field of Dreams is the best baseball movie ever made. Why? It is because it has nothing to do with winning or losing or underdogs or pennant races. No. It's about how baseball defines us as Americans, as fathers and sons. 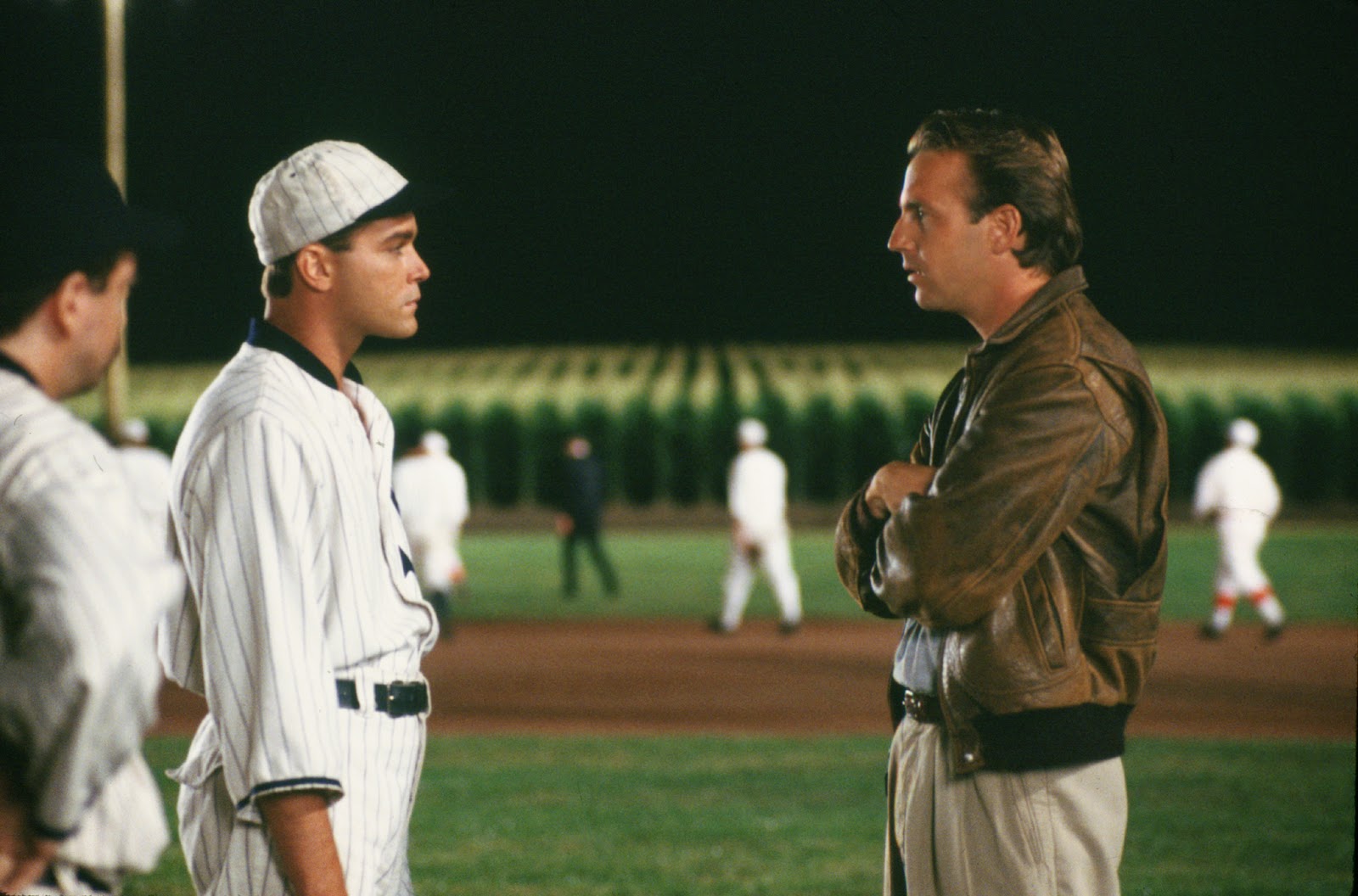 The audience knows instantly, from the opening shot of that Iowa cornfield at dusk, that this is no ordinary "baseball movie." No. This movie has something to say, something to say about faith and redemption. That first shot says it all. Ray Kinsella (Kevin Costner) works in his cornfield, wind slightly swaying the stalks, a voice from above whispers, "If you build it, he will come." The camera glides just above the field on a crane establishing a tone that will lead to a dark, heavy mood, almost one of dread. It's all a bit creepy. Then, this movie lightens up. Its magic seeping through nearly every perfect frame as a man masters the ultimate test of faith and comes to eventually understand the true nature of our country's greatest game. 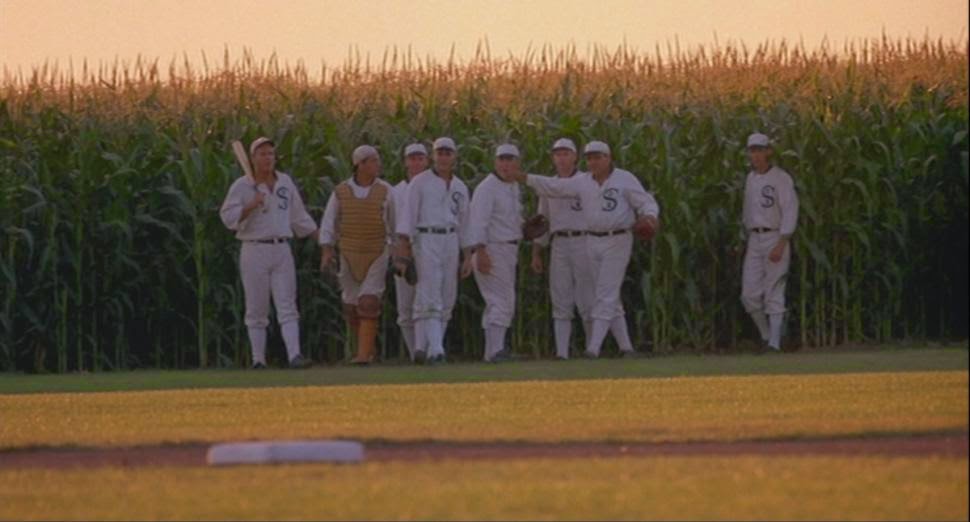 The voice leads him to plow under his corn and build a baseball field. The first phase of his test. This, of course, brings a visitor to his field..."Shoeless" Joe Jackson (Ray Liotta), the long-dead ballplayer, one of the greatest ever, who had his dream of playing baseball cut short by a scandal many believe he had little to do with. The voice arrives again. "Ease his pain," it says. "Who's pain? What pain?" Ray pleads. Maybe it's Terrence Mann (James Earl Jones), a J.D. Salinger-type writer from the '60s, who is haunted by his former success and a hidden passion for baseball. "Go the distance," the voice says. Go where? To a small town in Minnesota where a man by the name of "Moonlight" Graham (Burt Lancaster) lives. He played one inning of one game for the New York Giants 50 years before and never played again. Can Ray help him? Is Ray's little baseball diamond in Iowa supposed to bring him back? Is this field "Heaven?" Ray's belief, his faith that something is supposed to come of this journey is what makes this movie great. That he is supported by his wife, Annie (Amy Madigan), only strengthens this, even in light of the fact that, well, he cut into his crop and could lose everything. 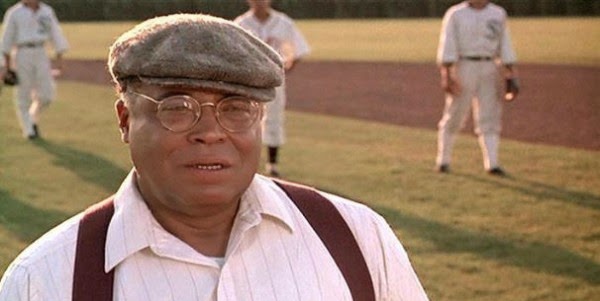 Field of Dreams is a beautiful movie. One the perfect movies of my movie life. It is such, not only in its breathtaking zoom-ins and pastoral color palette of greens and golds or even the masterful speech delivered to perfection by James Earl Jones as Terrence Mann, but also at its core. A man follows an illogical path bent on taking everything away, and, in return, the man gains everything and more. He gets that chance to feel like a good husband to his wife, a father to his daughter, a friend to the heartbroken 1919 White Sox and to his favorite writer as a young man, and, most importantly, a son to his father. That's what baseball does. It makes us all, man or woman, boy or girl, fathers and sons.