Last week, I had the great fortune, thanks to Mr. Ken Leinart and Mr. Allen Handley, to attend this year’s Knoxville Film Festival.


Organized by local documentary filmmaker, Keith McDaniel (2005’s “Secret City: The Oak Ridge Story” and 2006’s “The Clinton 12”), Knoxville’s contribution to American independent cinema is only in its second year, but the overwhelming support was evident on opening night last Thursday as Regal Downtown West filled up to the brim with local film buffs.
The event kicked off with a few words from Mr. McDaniel himself and the presentation of a Lifetime Achievement Award to Ross Bagwell, Sr. If you haven’t heard of Mr. Bagwell, I urge you to start Googling. He is known as one of the pioneers of cable lifestyle programming and had a big hand in getting HGTV and its affiliates to take up a home base in Knoxville. He is no doubt an important figure from right here in our back yard.

I was also impressed by an ad that played before the opening feature from “Visit Knoxville” that was all about bringing movie and TV productions to East Tennessee. It is apparent that our neighboring “big city” is on its way up.

The first taste of cinema came by way of a feature film produced right here in Knoxville and the surrounding areas called “Something, Anything.” As the Opening Night Selection, Mr. McDaniel and the KFF crew couldn’t have found better timing.

Knoxville filmmaker, Paul Harrill’s feature film debut has been floating around at quite a few smaller film festivals this year. It is a stellar achievement for a young, local writer/director, who I’m sure we will see more from in the coming years. 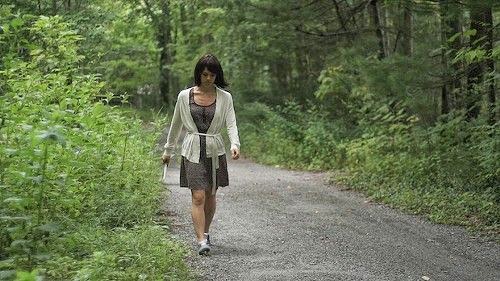 “Something, Anything” is a quiet, beautifully shot journey into the depths of a young woman’s soul as she deconstructs her life following a tragedy. The young woman, Margaret (played by newcomer and Knoxville native, Ashley Shelton) could just as well be your sister or best friend. She works as a realtor, and, as the film begins, gets married to the good-looking, successful Mark (Bryce Johnson, “Pretty Little Liars”). All seems to be falling into place.

As the relationship moves forward, though, Margaret finds herself not quite fulfilled. A key turning point (the tragedy) comes very early on, leaving Margaret to quietly consider what’s next, leaving those closest to her by the wayside. As she makes one questionable decision after another, ultimately leading to a spiritual awakening and rekindling of an old friendship, we sit in awe, wondering and wandering right alongside her.

While I’m not sure how this movie would play to a wide audience, I found it audacious and, for lack of a better word, interesting. Ashley Shelton’s performance grows on you in a calm sort of way. Well, it’s a strikingly calm movie. She has a soft smile and a face that is knowing and unsure at the same time.

Paul Harrill’s direction is, likewise, quiet and knowing, yet unsure at times as well. Where he falters in his direction of the actors (some dialogue that probably worked on the page but not on the screen) and work in the editing room (some odd continuity issues early on), he shines immensely in the visuals alongside cinematographer, Kunitaro Ohi. There is some beautiful East Tennessee scenery in this movie, most notably in a road trip up I-75 into Kentucky and in a scene to see the synchronized fireflies in the Smokies.

Overall, I was impressed with “Something, Anything.” How refreshing to see a movie about a search for truth and meaning from a female perspective. How wonderful to see Knoxville, not only as background but also as part of the story itself.

I look forward to more from Paul Harrill, who has proved himself a true visual force. It’s no wonder he was named of “25 New Faces of Independent Film” in Filmmaker Magazine. He is, no doubt, a Knoxvillian with a bright future ahead in American independent cinema.