Boys and Their Wars 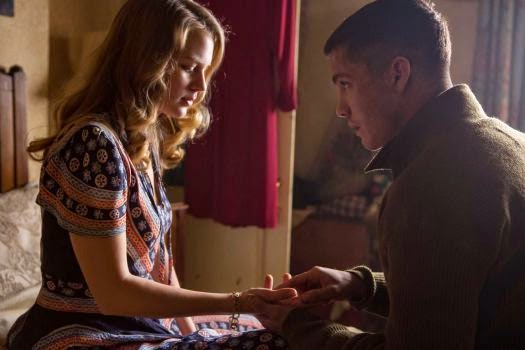 Past, present, future…no matter. Throughout history, fictional or otherwise, and into imagined futures, young men are sent to fight, to kill, to sacrifice.

It is this idea that fuels what I believe we love most about war movies:  The youth of a land taking up arms in defense of freedom, rights, survival, life itself.

Last weekend, I was able to catch not one, but two new movies that have this theme at their centers. And then there are also the girls. More on that later. 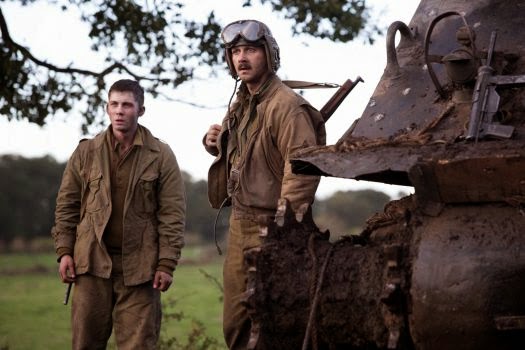 The first, David Ayer’s relentless WWII film “Fury," takes us inside a Sherman tank in the middle of Germany in the final weeks of the last Great War.

Sgt. Don “Wardaddy” Collier (Brad Pitt) leads a crew of hardened men into gruesome battles and has been for years. After losing one in battle, a new one emerges. He is young Army typist Norman Ellison (Logan Lerman), thrown headlong into a Sherman tank platoon with no experience in killing whatsoever. Killing Nazis is Collier’s business. And, as Pitt’s Lt. Aldo Raine (a somewhat similar character in Quentin Tarantino’s “Inglourious Basterds”) said, “business is a-boomin’.”

Young Norman’s story sits at the heart of all the madness. This is a dark movie. Perhaps the darkest war movie I’ve seen since Oliver Stone’s “Platoon” (1986). As he joins the tank crew consisting of “Bible” Swan (Shia LeBoeuf), “Gordo” Garcia (Michael Peña), and “Coon-Ass” Travis (Jon Bernthal), he finds himself (and we find him) a lost boy in the midst of men. We feel for him. We come to see these men through all the cussing and killing as a true band of brothers, however dysfunctional, a family just the same.
Under the harsh, yet often endearing, leadership of Pitt’s Collier, Lerman’s Norman grows quickly into a killer. But the youthful innocence in his face remains. The performances in this movie, especially those from Pitt and Lerman, are superb, even in a movie that doesn’t really seem to value much more than being honest about the harsh truth of battle. It is not about the characters or their lives, there is very little plot, no narration. I like this about “Fury”. 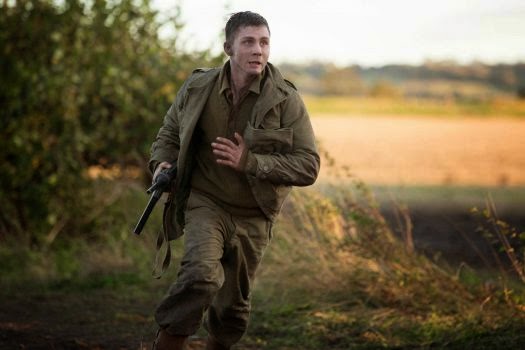 Never before have we seen the inner-workings of an ultimate military machine so clearly. David Ayer is an incredible action director. The violence in this movie is amped-up to a level of pure realism. The muddy roads, the ruins of Germany, the smoky gray skies, the bullets clanging against the metal of the tank, the blood. It is, plain and simple, a gritty movie about war and a grand achievement in entertainment and that's all it means to be.
The second part of my weekend double feature was the adaptation of James Dashner’s YA science fiction novel “The Maze Runner”. Having recently read the book as part of my classes’ yearly “Book-to-Movie” project, I was excited about this one.

The movie opens, as the book does, with Thomas (Dylan O’Brien) emerging upwards in an elevator cage into “The Glade”, an expanse of open land and forest surrounded by the four walls of a giant, elaborate maze. He has no memories of anything. Nobody else there does either.
There he meets the leader Alby (Ami Ameen), Newt (Thomas Brodie-Sangster), the lovably chubby Chuck (Blake Cooper), the “runner” Minho (Ki Hong Lee), and the sinister Gally (Will Poulter). They lead a group of about 30 young men ranging from 13 to 18 that look like a cross between the “Lost Boys” and the cast of characters in “The Lord of the Flies”. 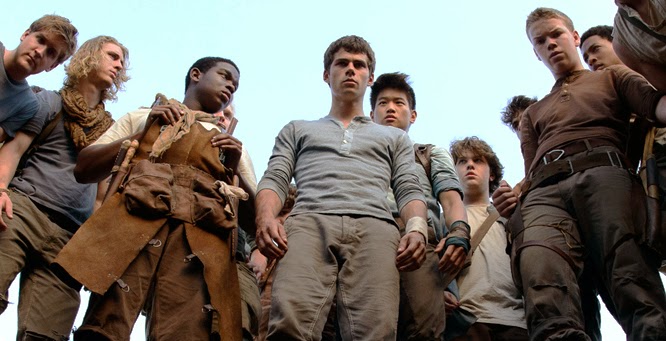 Thomas, it seems, is different from most, however. He is confident and immediately wants to be a “runner”. The “runners” are the ones who go into the maze each day and try to map it, to find a way out. It has been three years. Thomas is the newest “greenie”.
When Thomas breaks the rules and enters the maze just as the doors are about to close for the night, we see, for the first time, what the maze is and what it, more importantly, contains: Ugly robotic alien creatures that sting and kill or both. There is a war out there in the maze, and beyond that, we find yet another one.
At about the halfway point of “The Maze Runner”, a shockwave is sent through the story. A few days after Thomas emerges into “The Glade”, another box is sent. This time it contains a girl named Teresa. The first girl. Ever. She carries a note that says, “This is the last one. Ever.”
What she brings to this group of “lost boys” is hope and fear simultaneously. She brings also memories to Thomas, who catches glimpses of his previous life after she arrives. 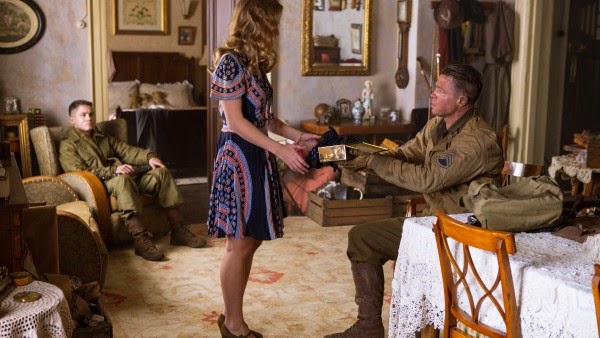 Likewise, in “Fury”, young Norman finds glimpses of hope and memory through the introduction of Emma, a young German girl hiding in a town his platoon has just taken. I feel that some may find this interlude in all the action odd. I found it clever. Intense and calm at the same time, it portrays the human need for clarity in the midst of such a huge downfall in humanity that is war.
I truly enjoyed "Fury," mostly for its no-holds-barred depiction of WWII.

“The Maze Runner”...not so much. On the surface, it was great looking and fun, but, in the end, it is way too silly and manipulative to take seriously. It doesn't deserve the emotions it wants from you.

I do appreciate the connections I found between them, however. Two movies: one, a historical war epic; the other, the first chapter in a futuristic battle for survival; and both with the addition of that one female character giving the hardened boys and men of war glimpses of strength and hope.

I always find it amazing how connections stream through our lives, even down into the movies we choose to watch. That may very well be the reason I love a double feature.