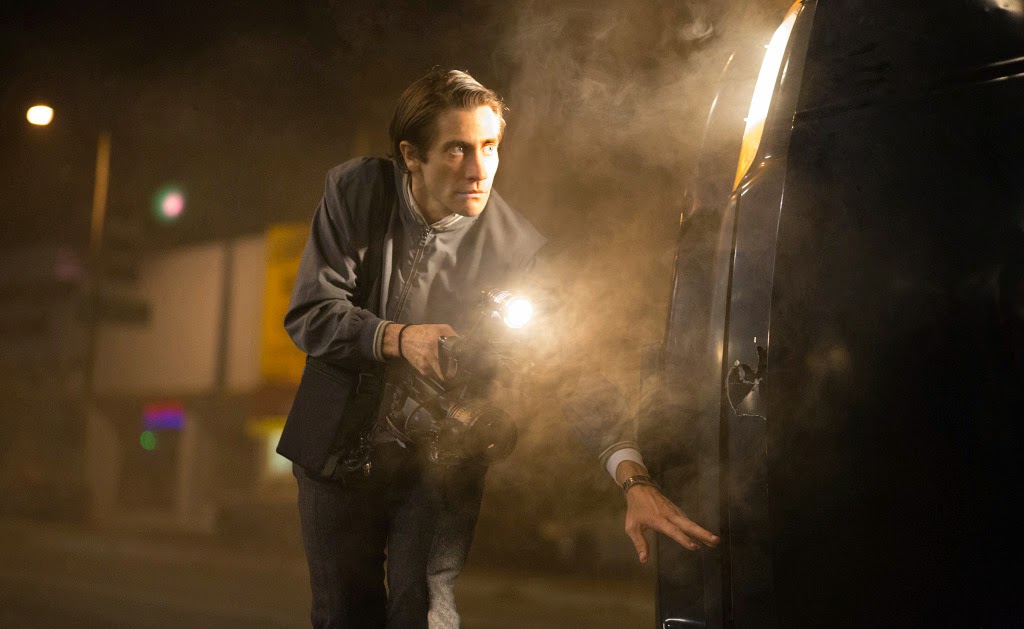 Characters like Lou Bloom don’t come along very often. Like Robert DeNiro’s Travis Bickle in Scorsese’s “Taxi Driver,” he is a man alienated from society. He has big aspirations and achieves his goals in misguided ways.
Jake Gyllenhaal has been doing some fine acting these days. He has garnered much praise for his work in last year’s “Prisoners” and the odd doppelganger thriller in “Enemy,” released earlier this year. I have seen neither of those. I now will.
As Lou Bloom, Gyllenhaal has created a performance unlike many I’ve seen. Bloom, a small-time thief, who mostly steals scrap metal from construction sites and expensive bicycles in Venice Beach, comes off from the start as an eerie oddball. He has a way of selling himself. Early in the film, he tries to get a job at a scrap yard. He tells the owner that he believes in the idea that “if you want to win the lottery, you have to have the money to buy a ticket.” In director Dan Gilroy’s “Nightcrawler,” Gyllenhaal puts his money where his mouth is and then some. 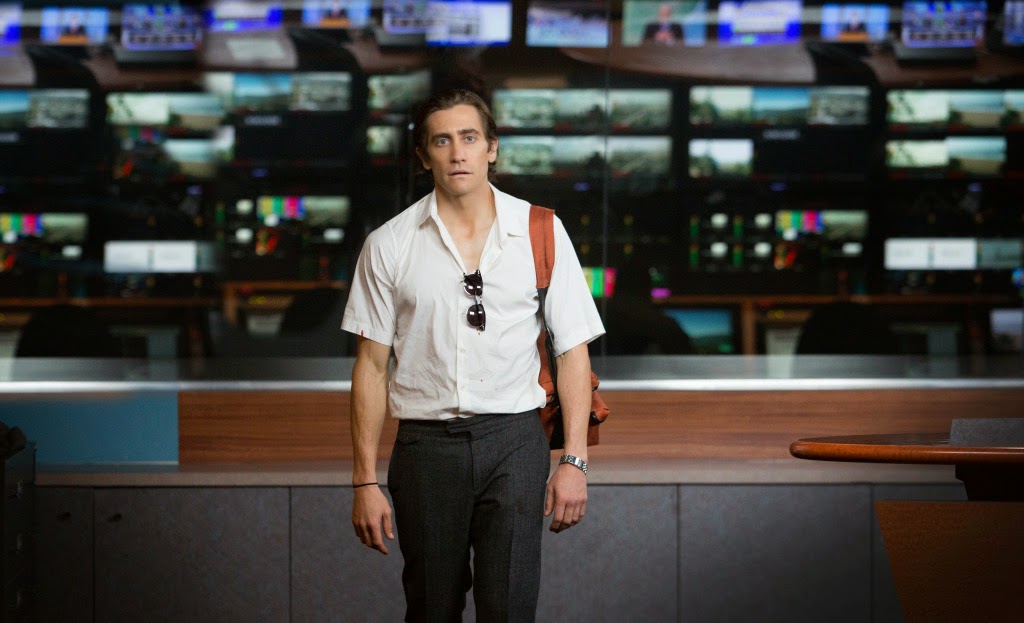 When Lou happens upon a fiery crash on an L.A. freeway one night, he notices some gentlemen, including Joe Loder (Bill Paxton), with an interesting job. They arrive on the scene to shoot video footage for the local news. Lou is hooked.
He buys a camera and a police scanner and starts going after the exclusive. When he gets right up close to a crime victim with a gruesome gunshot wound, he makes his first freelance sell. This is to KWLA, a low-rated news station, whose nightly news director, Nina Romina (Rene Russo), is more-than-willing to pony up some dough for a solid leading story.
He is a loner, an outcast. He spends his time teaching himself everything online. He methodically learns police codes and begins to weed out the good from the bad. The good being crimes and accidents in the more middle-class areas, and the bad being the crimes where crimes usually happen. He gets good. The money starts rolling in. 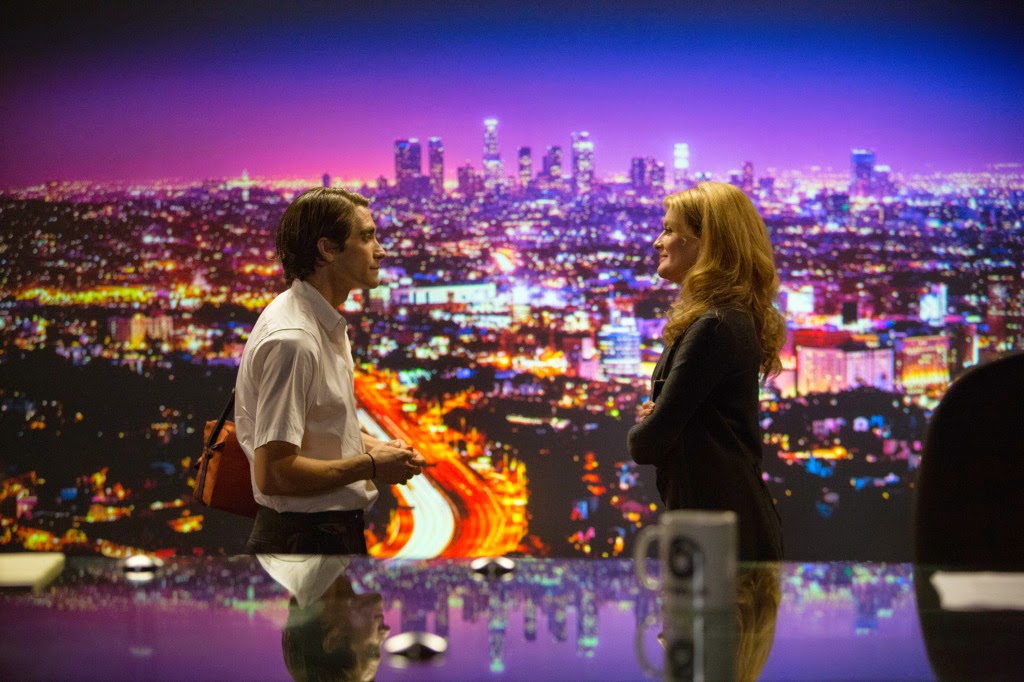 He hires an assistant for his new “company.” His name is Rick (unknown actor Riz Ahmed in a stellar supporting role). He buys a new Dodge Challenger and races it through the underbelly of Los Angeles in the dark and glorious night going to uncomfortable and risky lengths to get his footage. Lou speaks of himself and his worldview with grandeur. He is a master manipulator. He gets what he wants in many more ways than one, no better evidenced that in several chilling, darkly comic scenes with Russo.
Jake Gyllenhaal has been a favorite actor of mine for a long time. He has done some great stuff. We know him around here as the teenaged star of “October Sky” (1999). In “Nightcrawler,” he is a man on a mission. His performance is confident and direct as is his character. His body is thin, his hair is greasy, and his eyes are wild.
Writer and first-time director Dan Gilroy (best-known as a screenwriter) has crafted an intense and suspenseful thriller. We find ourselves easily immersed in this story as we watch a driven man do things we can’t imagine ourselves, or anyone, doing. Gilroy constantly has us enthralled in what we’re seeing with a dark, realistic tone. Thanks to cinematographer Robert Elswit, the dark Los Angeles of this movie looks as raw and grainy as the footage Lou captures from the wrecks and shootings and stabbings. 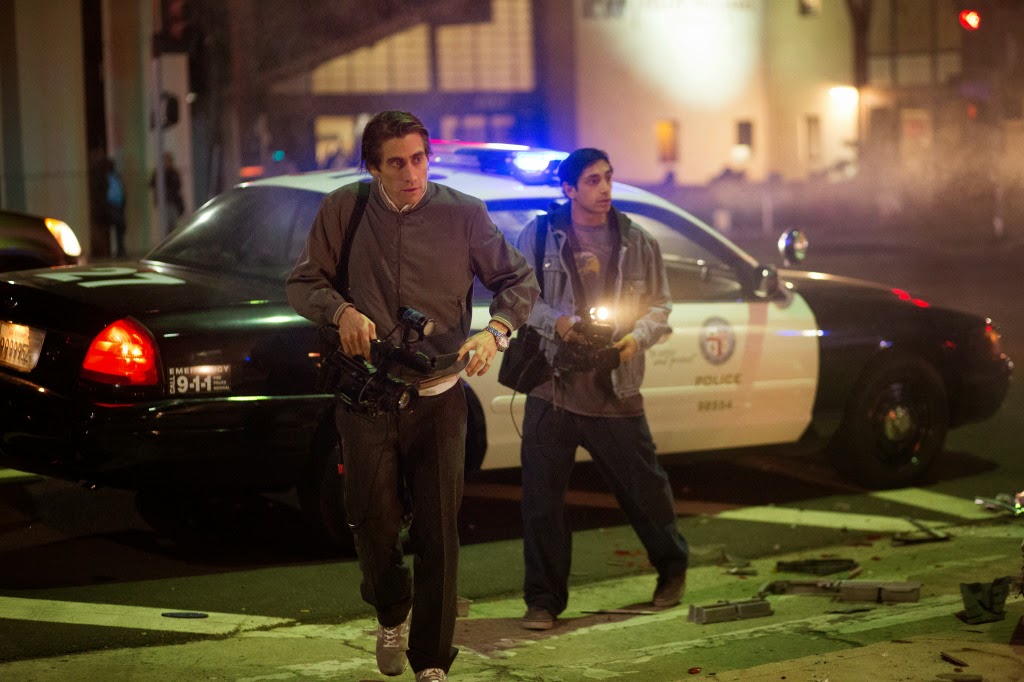 In the end, I found myself questioning how many people actually do things like this. Night crawlers like Lou Bloom must be in every major metropolitan area in this country. Guys on the front line finding the sensationalism we so much desire in our news. And I wonder to what lengths these people go. “Nightcrawler” will certainly do that to you.