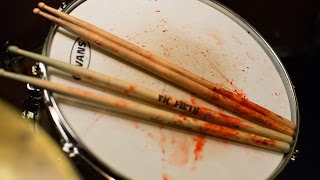 Writer/director Damien Chazelle’s “Whiplash” is alive and breathing. It bleeds. It sweats. It cries. It is one of the most intense movie experiences I’ve had. I was one of only four audience members at my screening.
Miles Teller plays Andrew Neiman, a first year jazz drummer at a prestigious New York music conservatory. His goal is a simple one: “I wanna be one of the greats,” he says. Andrew’s first step towards greatness comes at the beginning of the film as he works out a beat in an empty practice room. The school’s top teacher and conductor, Terence Fletcher, played by a fierce J.K. Simmons, overhears him, comes in, and starts conducting. The stage is set for one of the greatest acting duels I’ve ever seen.
Eventually, Fletcher, after interrupting the lowly first year jazz ensemble at rehearsal, asks Andrew, playing second chair, to come in to work with his top band, the Shaffer “Studio Band.” A storm brews. We sit awestruck in the middle of it. We don’t dare move a muscle.

Fletcher is demanding to say the least, sometimes even cruel. As played by Simmons, he is an intense, harsh madman, and probably even a musical genius. At the first practice with the “Studio Band,” Andrew takes the stool. He jumps into a tune called “Whiplash,” and can’t find the tempo. Fletcher stops him and starts him over and over and over. It is painful to watch.
Fletcher’s mind game continues as he pits other drummers against Andrew, stopping at nothing to get the exact sound he wants…if that even exists. Andrew practices and practices and practices. He strikes up a relationship with the girl (Melissa Benoist) who works the concession stand at his favorite movie house, a place he frequents for classics with his single father (Paul Reiser). His relationships crumble. He practices and practices and practices. Blood spews from blisters in the crook of his thumbs and forefingers, sweat splashes his kit, painful screams and tears follow.
“Whiplash” is a movie about desire and the pain the greatest endure to make it. Miles Teller pulls this off as an actor of immense power. As evidenced in my favorite movie of last year, the teen romance “The Spectacular Now,” he has a keen instinct for screen acting. He plays emotion on his face better than any young actor out there. Here his face breathes drive and determination. 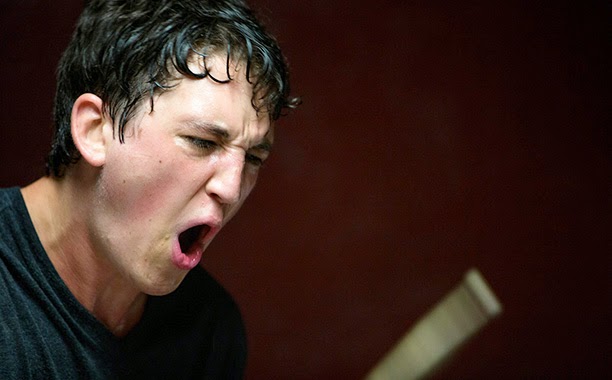 J.K. Simmons, known mostly in many, many smaller roles, commands the screen here. He is a force to be reckoned with, as is his character. He spouts devastatingly crude insults to the tune of R. Lee Ermy’s drill sergeant in “Full Metal Jacket” and then smiles immediately after. He screams and claps and throws things and loves music. It is one of the best performances of the year.
As a director, Damien Chazelle is top-of-the-line. This film is shot most often in close-up. Mouths, instruments, eyes, drums…all up close, right in your face. Faces, in fact, are important in this movie. And the two leads have faces of great character. I felt immersed in this movie. Working with cinematographer Sharone Meir, Chazelle moves the camera only when necessary and does so astonishingly and with purpose. There are quick camera zooms in this movie that would excite the most seasoned Scorsese fan.
“Whiplash” is simple in plot but masterful in execution on all levels. There are some shocking developments along the way, but mostly it’s a story about a driven young jazz drummer and his maniac professor with a light sprinkling of supporting characters left in their wake. It begs the question: To what lengths will some talents go to be the best? Similarly, how far is too far for a teacher to go with his charges? It also takes us on a journey into the complicated (and dying) world of Jazz. As a lover of the true American art form, I felt this as well.

We live in a world where movies are a-dime-a-dozen (Well, maybe more than a dime, but you catch my drift.). People line up for the big blockbusters that mostly underwhelm. Why not seek out movies like this one? It has everything: a good-looking young star, a strong, frightening villain, and a goal to reach. How it gets there is the most rewarding experience I’ve had at the movies this year.
So, here it is: Go Now! Get in your car. Drive to Regal Downtown West. Buy a ticket. And let this movie run its course for you on the big screen. You are undoubtedly sure to leave shaken, surprised, and fulfilled.

Email ThisBlogThis!Share to TwitterShare to FacebookShare to Pinterest
Labels: Essays, For the Courier News