On Elf: 7 Reasons Why It's My Favorite Christmas Movie 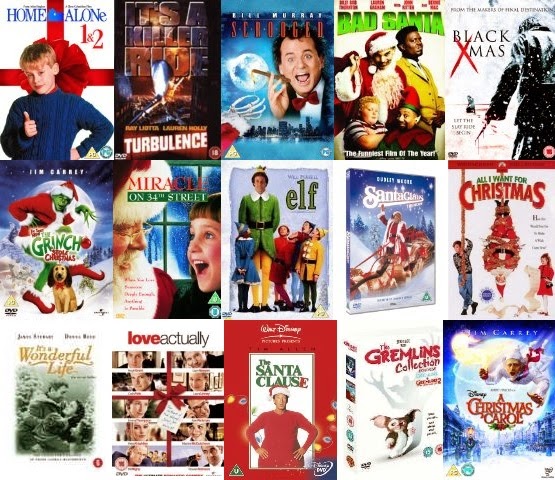 I've never been much of a sucker for holiday themed movies. I never absolutely just had to watch a certain movie at Christmastime, for example. Of course, growing up, there was no shortage of viewings of A Christmas Story, and, like many, I have become accustomed to watching National Lampoon's Christmas Vacation at least three times per Christmas season, yet never in order.

Since then, I have come back to two "Christmas movies" every year. On Black Friday, my wife and I avoid the shopping savagery to stay home, put up our tree and Christmas decorations, and watch the same movie: Richard Curtis' Love Actually. It's a great movie. Funny and charming and British. But it still doesn't give me that punch of Christmas spirit I desire. No, that belongs to Jon Favreau's Christmas 2003 mega-hit starring Will Ferrell, Elf. 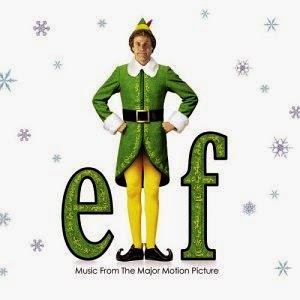 Pure happiness, it features good old stuff, some not even Christmas tunes, like Louis Prima's version of "Pennies for Heaven" or Frank Sinatra's "You Make Me Feel So Young." As far as Christmas classics go, it has only the best. Ella Fitzgerald doing "Sleigh Ride." Lena Horne doing "Let It Snow!" And, of course, Eartha Kitt doing "Santa Baby." Then, there's Zooey Deschanel, with her beautiful velvet-y twang, dueling with Ferrell on "Baby, It's Cold Outside." She also has a cut with Leon Redbone on the official soundtrack album, which brings me to...

2. Zooey Deschanel (and the rest of the supporting cast) 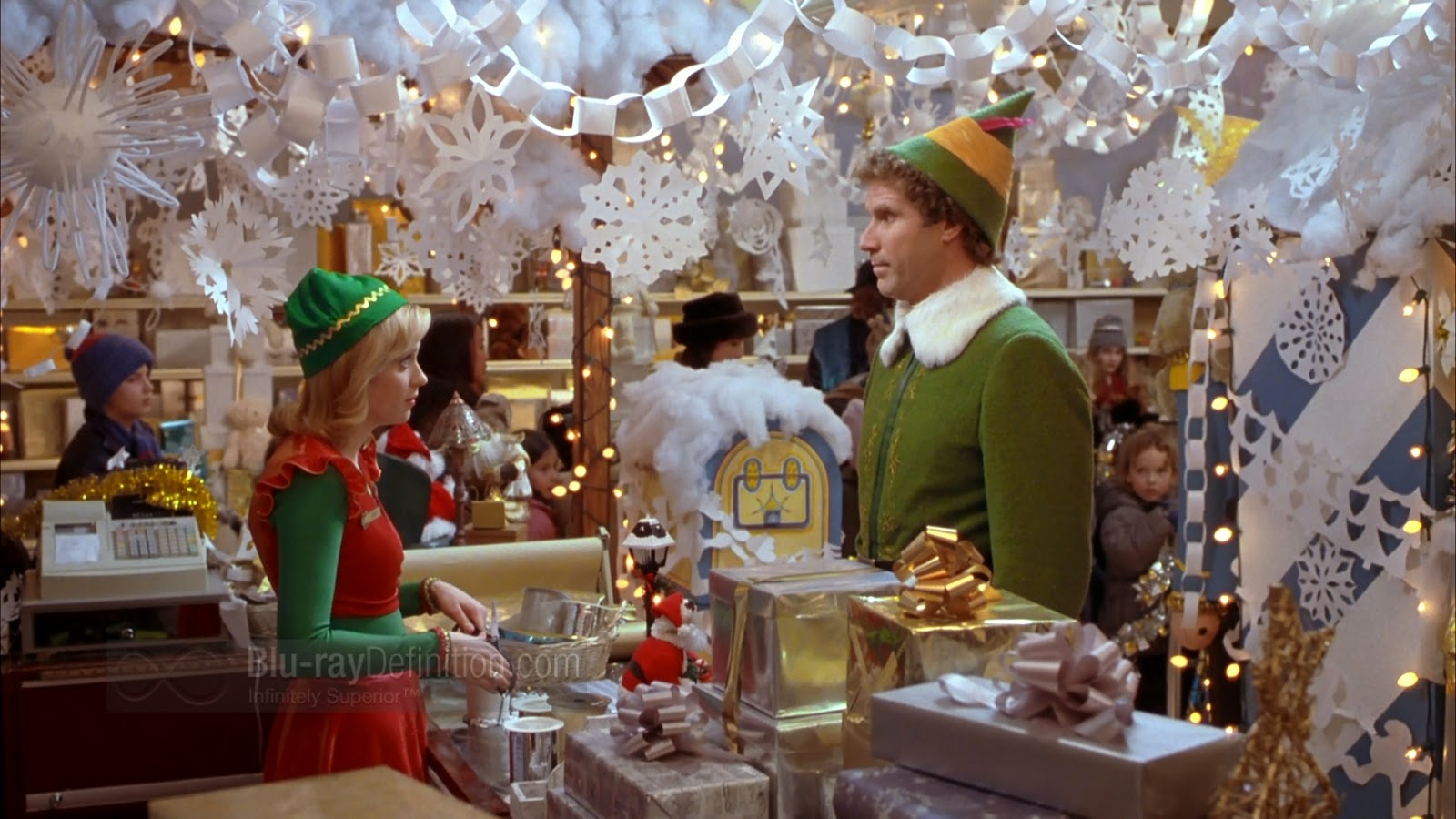 OK. So Zooey hasn't been as prevalent in movies lately, for sure. But she continues to be one of the great loves of my life. It started with 2000's Almost Famous, picked up steam here, and then sealed up with 2009's 500 Days of Summer. She has this hipster feel to her (off-putting to some, I'm sure) with what her 60's country-esque crooning as part of the duo "She & Him," who've made some great albums. My kind of gal, really. She is just so likable here as Jovie, the department store elf, who catches the eye of Will Ferrell's Buddy the Elf. They make an unusual pair but their first big date scene in the movie just seals her charm for me. 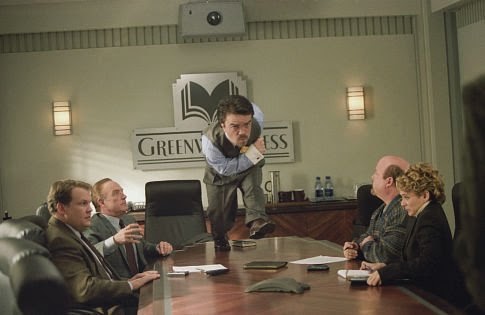 Elf boasts an incredible supporting cast, including James Caan, Mary Steenburgen, Peter Dinklage, Ed Asner, and Bob Newhart at Papa Elf. But it's Deschanel's Jovie that truly gets to bring it all together in the end, during a scene that is, all at once, action, hope, Christmas spirit, and music, and a love letter to... 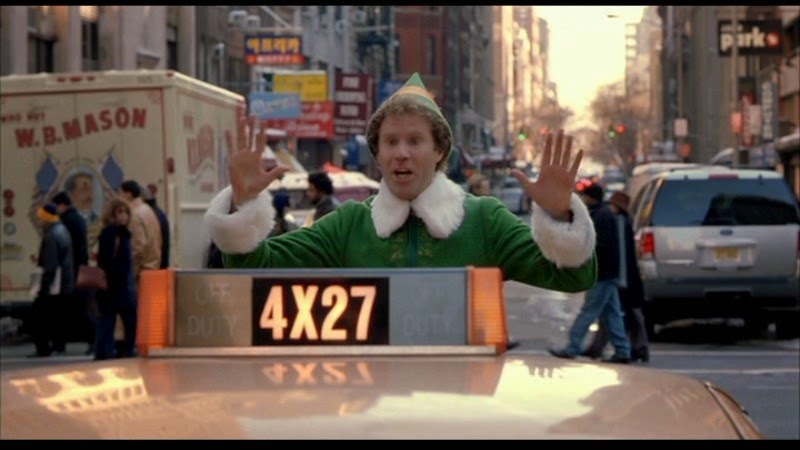 Setting is everything in this movie. There is nothing like a good New York City movie, especially a Christmas-set one. Central Park and Rockefeller Plaza might as well be characters in this movie, providing delightful backdrops for some of the movie's best and most memorable scenes, made even more special with the addition of... 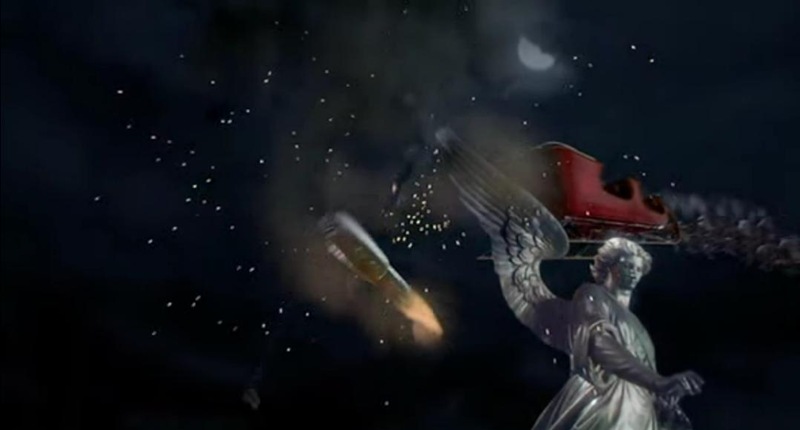 I applaud this movie for being so straightforward and real, while at the same time being a total fantasy. It is made like any romantic/Christmas comedy, grounded in a current day movie New York. But it contains magic. Snowball fights at machine gun speed and sniper-rifle accuracy. Intermingling of classic Christmas characters in a genius representation of the North Pole. A crew of sinister, fantastical Central Park Rangers, who are still under investigation for methods used at the Simon and Garfunkel concert back in the 80's. All of this brought to life by... 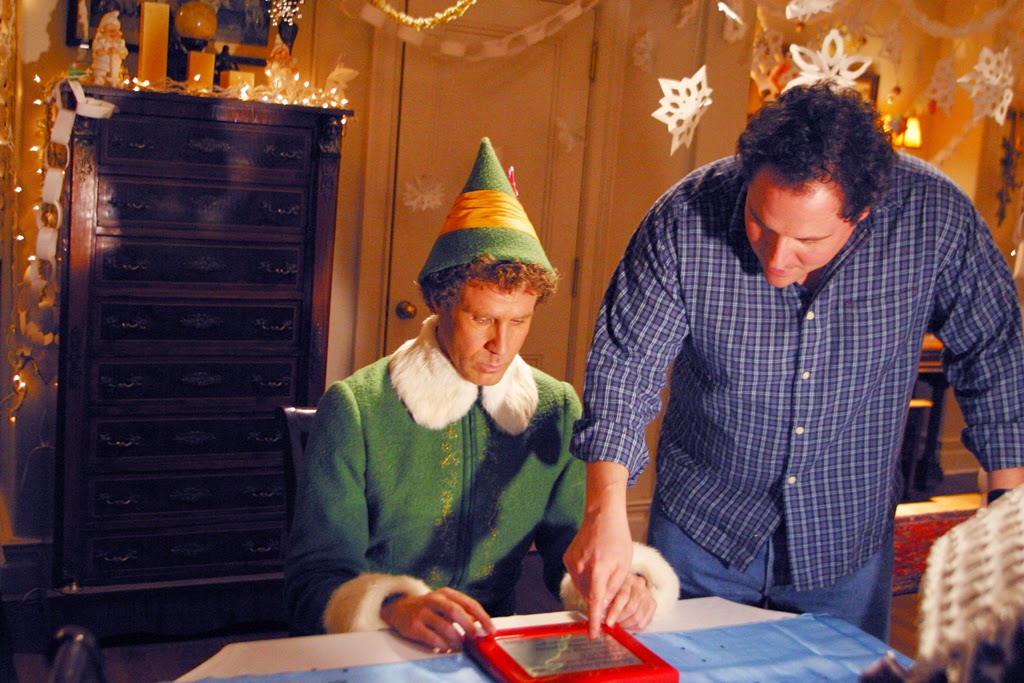 While Elf is a simple movie for the most part, the heart-warming yet heavy cheese that is this movie in the end is made great by the sheer skill Favreau brings with his special effects team on the final Santa (Ed Asner) in Central Park action set-piece. This movie looks good, and he gives Ferrell just the right amount of give. Ferrell's movies often suffer from too much script freedom. It is made with care and love and huge amounts of memorable humor found most easily in...

I mean, just think of how these are now ingrained in the American Collective Movie Memory:

"You sit on a throne of lies!"

I could go on and on and on, but I'll just wrap this up with the sweetness:

"The best way to spread Christmas cheer is by singing loud for all to hear."

Which brings me to the finale of this post, and one of the best things about it for personal reasons... 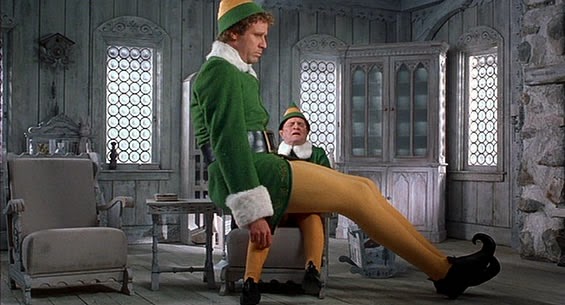 Now, I don't care anything about movie ratings. In fact, the whole MPAA system makes America laughable in the realm of world cinema. But, the PG helps me out. I am a middle school teacher, so this affords me the opportunity to show it at school as a semester's end incentive. I love it when "family" movies are actually good. Elf is exactly that. Accessible and fun for people of all ages.

It is a true Christmas classic in my eyes. And I will continue to watch it once a year, every year.

I would love to hear any thoughts or opinions or even a short list of your Christmas favorites in the comments section.

Email ThisBlogThis!Share to TwitterShare to FacebookShare to Pinterest
Labels: 7 Reasons Why, The Best Movies