A review by Kevin Powers 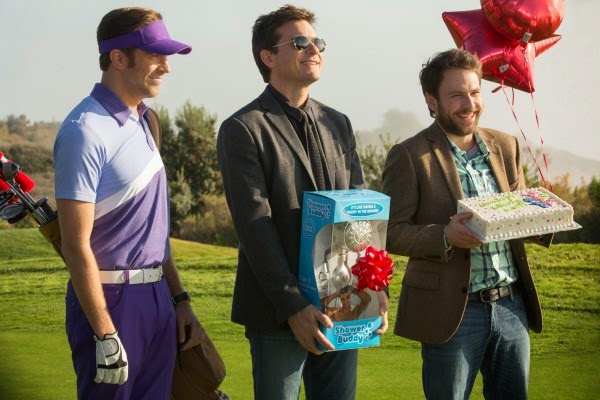 There is absolutely no real purpose behind the existence of the new comedy sequel Horrible Bosses 2. Most sequels are unnecessary anyhow these days, serving to only make money. Despite my feelings on that, I just can’t help it. Horrible Bosses 2 is hilarious and nearly as funny as the original.
For those who didn’t see the first installment, it focused on three buddies named Nick, Kurt, and Dale played, respectively, by Jason Bateman (Fox’s “Arrested Development”, the 2007 film Juno), Jason Sudeikis (“Saturday Night Live”), and Charlie Day (FX’s “It’s Always Sunny in Philadelphia”). You see, they had jobs made unbearable by, well, “horrible bosses” played brilliantly by a maniacally evil Kevin Spacey, an idiotic, drug-addled Colin Farrell, and an absolutely sex-crazed Jennifer Aniston, the star of the show. The plot focused on their misguided and failed attempt to whack said bosses. I loved every minute of it, and my wife and I watch it on DVD often when we need some good laughs.

The recently-released second installment ditches the whole idea of the first one, since, of course, there was a resolution at the end, and makes the disgruntled trio of employees their own bosses, inventors of a new product called the “Shower Buddy.” After a incredibly vulgar and gut-busting opening scene in which the three pitch their new product on a local L.A. morning show, Nick & Kurt & Dale are led to billionaire business man, Bert Hanson, played by Christoph Waltz (Inglourious Basterds, Django Unchained), and his playboy son, Rex, played by Chris Pine (J.J. Abrams' Star Trek movies). 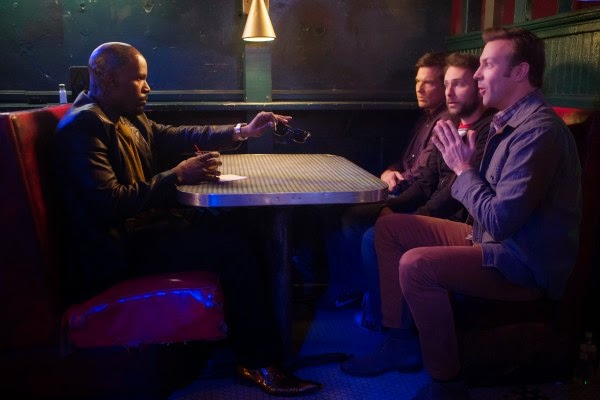 When a business agreement quickly goes awry, Nick & Kurt & Dale plot another misguided scheme to kidnap for ransom in order to get back their lost seed money. The largest part of the runtime is spent with the trio as they fail, once again, at breaking and entering and, of course, planning the entire kidnapping caper in sort of an Ocean's Eleven-lite sort of way. There’s not much else to say other than this one truth:  I laughed out loud and often. The clever gags and untold amounts of dirty one-liners just keep it alive.

Jason Bateman is a comic genius. He plays the straight man better than anyone out there, which works in both this movie and the original because the other two are so over-the-top in their idiocy. Jason Sudeikis, like Bateman, is as likeable as comedic actors come. His sleazy, womanizing Kurt character is as good here as in the first. And Charlie Day, well, he is a wild man, who does well in this kind of role. He is the perpetual sidekick, the nice but dumb friend, who gets caught up in idiotic schemes and then hilariously and loudly voices his awful ideas and opinions (see FX’s “It’s Always Sunny in Philadelphia”). In this one, his wife has just had triplets, so there’s that whole thing as well. 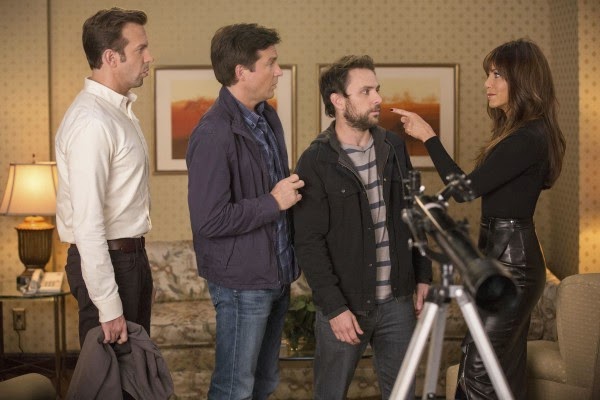 The original Horrible Bosses shined with its supporting cast. Here, the new supporting stars are fewer and not as good. Chris Pine, as the kidnapping “victim,” is a really great addition, sort of implanting himself as the fourth musketeer. Jennifer Aniston, back again as sex-crazed dentist, Julia, is just as good, if not better, than she was in the first. She has several scenes here that she plays with true reckless abandon, including one in which a sex addict meeting is interrupted. It is so much fun to see her do great comedy. Jamie Foxx returns as well as criminal advisor to the trio. A man whose first name cannot be mentioned in a family publication, but his last name is Jones. Given a little bit more screen time on this one, he is just okay and ultimately not needed. Two-time Oscar winner Christoph Waltz is severely underused, which is a major letdown.
Horrible Bosses 2, like other comedy sequels of recent years (see sequels to The Hangover), is just not necessary other than to provide a reason for some great comedic actors to get together and have a lot of fun.
I can’t really recommend this movie, especially to anyone who hasn’t seen the first, which is far superior. It might be a good choice on DVD or Blu-Ray, though, when you feel like some mindless, vulgar hilarity. I mean…we need that from time to time, don’t we?