Happy New Year, everybody! I'm happy to start a fresh year with Wandering through the Shelves' Thursday Movie Picks.

I love this category. That's really all I can say. I have a few picks that contain your non-traditional bank robberies. I easily could've gone with well-executed bank heist scenes a la Michael Mann's Heat or Chris Nolan's The Dark Knight. Alas, I feel this one calls for some more oddball bank heists. Robberies that, in the end, aren't really all about stealing money. I remember my Mom urging me to watch this movie when I was a teenager and in love with Pacino and The Godfather movies. I finally got around to it in college. Sidney Lumet is one of my favorite directors, especially his work in the '70s. Dog Day Afternoon is a great "bank robbery" movie because it's really so much more than that. It starts out as a bank robbery and hostage crisis with the usual police negotiation aspect. But what's great about this film in the end is the Pacino character's story. The movie escalates from bank robbery fair to social commentary on the state of the middle class struggle for wealth and also gay rights. Way ahead of its time in many ways, I stand with Pacino's Sonny, in that famed Brooklyn rebel yell of sorts, "ATTACA! ATTACA! ATTACA!"

When this category came up, I instantly thought of the one small bank robbery scene in Joel and Ethan Coen's O Brother, Where Art Thou?. When the trio of idiotic misfits played by George Clooney, John Turturro, and Tim Blake Nelson happen upon famed bank robber, George "Babyface" Nelson played brilliantly by fantastic character actor Michael Badalucco, the biggest laughs of the movie ensue. When the lady calls him "Babyface," his reaction is tragic and comedic all at once. "Who said that? What ignorant, low-down, slanderizin', son of a bitch said that?" It is just hilarious. Not to mention the aftermath, when George sees a cow in a field, says "I hate cows worse than coppers," then unloads his Tommy Gun. You see, old George is just another wounded soul in the Depression-Era South. Stealing money is just his drug. He ends up just leaving it behind. What a great movie! 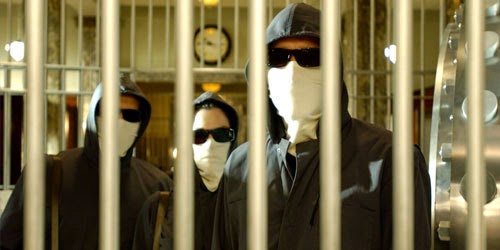 Spike Lee's Inside Man is an unloved movie in my opinion. Like Dog Day Afternoon, it is not about the bank heist it seems to be at the start, but about righting social injustices. You have a bank robber (Clive Owen) with a masterful plan, brilliantly and excitingly executed by Director Lee. You have the distracted police negotiator played by Denzel Washington, and you have the high-power broker with a hidden agenda played by Jodie Foster, which turns this heist standoff into something you never saw coming. It sure isn't all about money. That's what I like about it. It raises questions that most bank robbery movies don't.