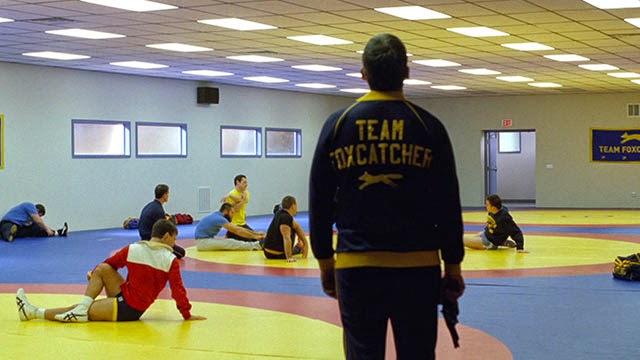 Man, was I excited about this movie! That probably explains why I feel so let down. It also didn’t hurt that I saw Bennett Miller’s Foxcatcher directly after seeing Wild, which is one of the best movies of the year.

Bennett Miller is a director known for three “Based on a True Story” movies. First, 2005’s Capote, starring the late Philip Seymour Hoffman, chronicled the writing process of In Cold Blood and suffered from being so brutally slow and bleak. His next work was an adaptation of Michael Lewis’ book about Oakland A’s General Manager, Billy Beane, the immensely likable Moneyball (2011), starring Brad Pitt. Finally, he ends up with Foxcatcher, telling the “True Story” (haha) of American billionaire John E. du Pont and his relationship with Mark and Dave Schultz, Olympic Gold Medal-winning wrestlers. Like Capote, it boasts incredible, transformative performances beaten down by a painfully slow, nearly dead-in-the-water movie.

This is NOT the actors’ fault. It’s the filmmakers’ fault. 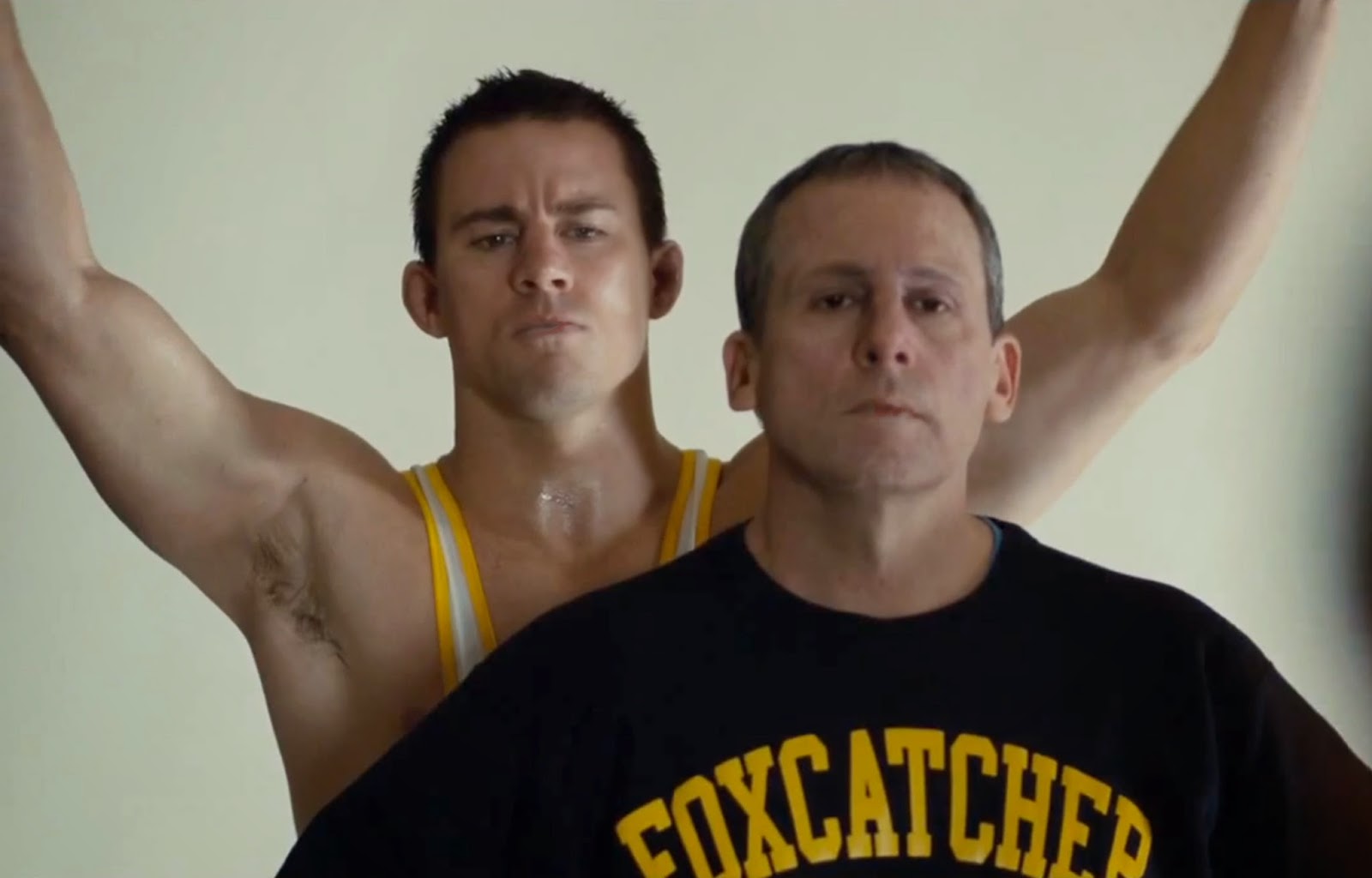 John du Pont (Steve Carell) was a rich man, the heir to the du Pont fortune. He was a Mama’s Boy living in the shadow of his family, especially his mother, Jean (Vanessa Redgrave). He was also very clearly mentally ill, which is something this film does right. It doesn’t become about that but remains hidden just beneath the surface. Credit to Steve Carell’s against-type mastery here. He plays du Pont with quiet, uncomfortable intensity. You can see the mental illness in his reaction time, his speech patterns. The audience doesn’t need to be told.

Du Pont has this dream of being a wrestling coach. He is obviously the son of a rich family as his work experience is writing books on birds and seashells. Now, he loves wrestling and gets in contact with Mark Schultz (Channing Tatum), who won the Olympic Gold Medal along with his brother Dave (Mark Ruffalo) at the ’84 Los Angeles Games.

Mark, as played by an also against-type Tatum, is a lonely, brooding character. His lower jaw juts out like an “ape,” a description that will un-cleverly mislead the audience as a possible catalyst for an atrocious crime at the end of the movie. He sits in the shadow of his more likable and responsible brother, Dave.

When du Pont invites Mark to come and live and train at his new wrestling facility at Foxcatcher Farms in Pennsylvania, Mark jumps at the chance. Dave is reluctant but, after a series of excruciatingly uncomfortable plot-developments, gives in and joins the Foxcatcher team. Foxcatcher is riddled with resentment. Mark resents Dave’s successes as both a family man and a wrestler. Dave resents du Pont for taking Mark away. Mark resents du Pont for turning his back on him to bring Dave to Foxcatcher. 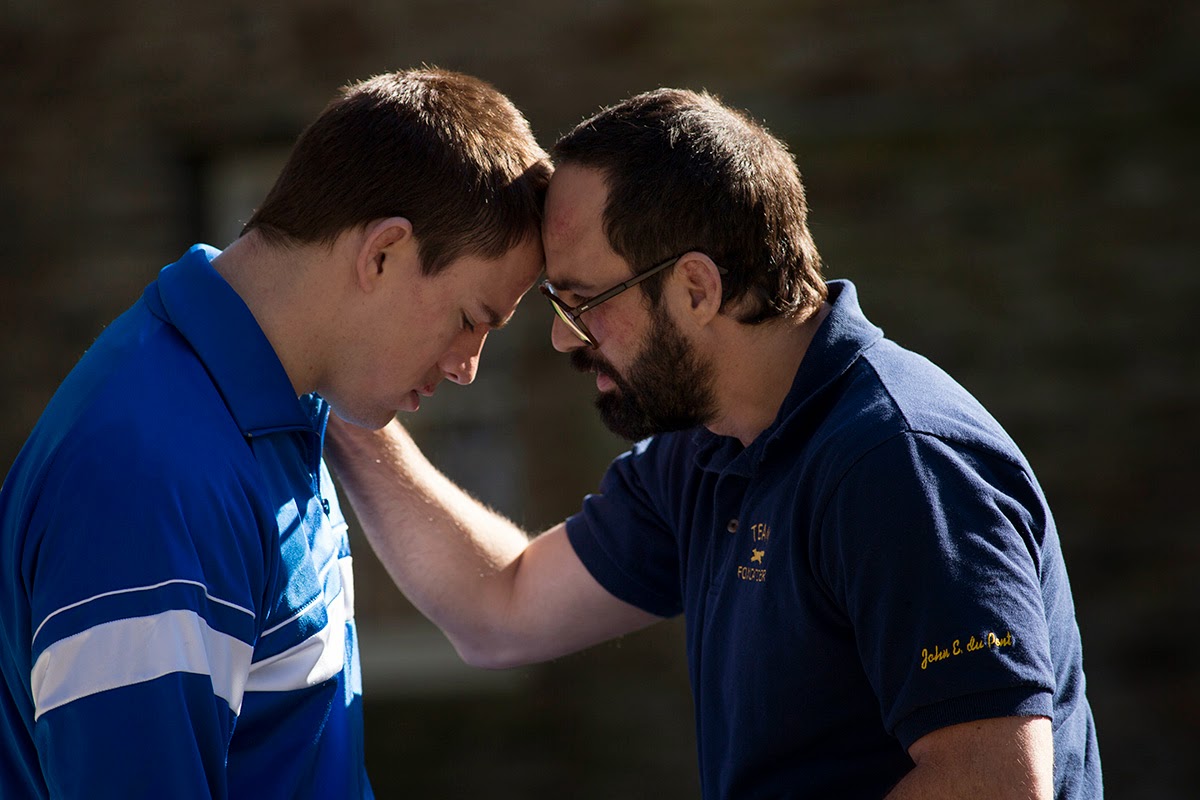 Screenwriters E. Max Frye (Something Wild) and Dan Futterman (Capote), working with full creative license, fill the film with homosexual overtones that don’t seem believable. The dialogue is mostly bland, though there are some good moments. I liked the scene where Mark and du Pont take a helicopter to a benefit in D.C. and the scene where Mark goes off on Dave’s wife, Nancy (an underused Sienna Miller).

Likewise, Bennett Miller and his team of editors build some great intense sequences, including a breakdown by Channing Tatum that is as good as any acting I’ve seen this year. Sadly, it is not sustained. What’s also sad is that all this slow-developing build up leads to a place we already know if we’ve read anything about the movie, and all this supposed “truth” is mostly lies. Like major lies. This doesn’t usually bother me, but I feel duped on this one. Google Mark Schultz, and you will be bombarded with stories on his hatred of this movie and its lies.

I feel cheated, and I feel like Bennett Miller and his crew, with their recklessness, has cheated its cast, especially Tatum and Ruffalo, out of some well-deserved praise.

For Foxcatcher, Miller won the Best Director award at the prestigious Cannes Film Festival. Sorry. But he should give it back.