A little less than a third of the way into Werner Herzog's 1982 epic "Fitzcarraldo," our hero, played by the fierce Klaus Kinski, answers a question posed to him by a land surveyor from whom he is purchasing a large parcel of Peruvian jungle. The man asks him, "Do you really know what you're doing?" Brian Sweeney Fitzgerald, or as the natives call him, 'Fitzcarraldo', answers, "We're going to do what nobody's ever done."

I would imagine that if that same question was asked to German auteur Werner Herzog upon pitching the idea to make this film, he would've said the exact same thing.

Most filmmakers simply make films. They tell stories with lights and cameras and sound stages and backlots and actors in secure, protected environments. They do a great job. We love these movies.

Werner Herzog creates experiences grounded in danger and mystery, true adventures complete with unexpected elements and settings and untrained actors. Then, he films them. We can't fathom how this sort of thing is even possible. And we love these too. 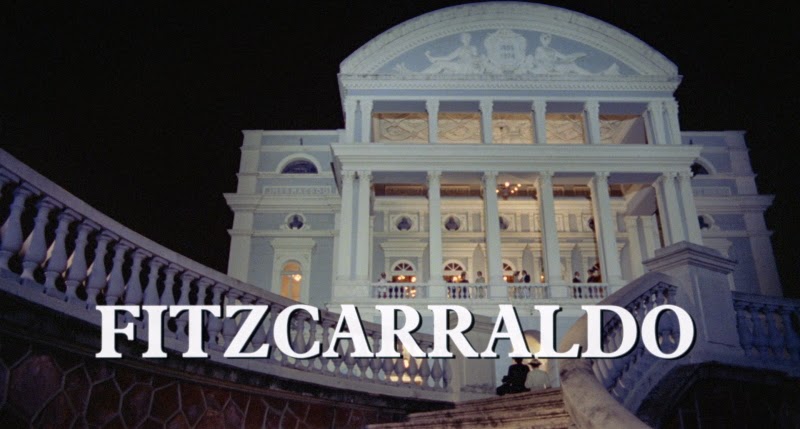 
Werner Herzog's "Fitzcarraldo" is one of the great visions of the cinema, and one of the great follies. One would not have been possible without the other. This is a movie about an opera-loving madman who is determined to drag a boat overland from one river system to another. In making the film, Herzog was determined to actually do that, which is more than can be said for Brian Sweeney Fitzgerald, the Irishman whose story inspired him.

"Fitzcarraldo" (1982) is one of those brave and epic films, like "Apocalypse Now" or "2001," where we are always aware both of the film, and of the making of the film. Herzog could have used special effects for his scenes of the 360-ton boat being hauled up a muddy 40-degree slope in the jungle, but he believed we could tell the difference: "This is not a plastic boat." Watching the film, watching Fitzcarraldo (Klaus Kinski) raving in the jungle in his white suit and floppy panama hat, watching Indians operating a block-and-tackle system to drag the boat out of the muck, we're struck by the fact that this is actually happening, that this huge boat is inching its way onto land -- as Fitzcarraldo (who got his name because the locals could not pronounce "Fitzgerald") serenades the jungle with his scratchy old Caruso recordings. 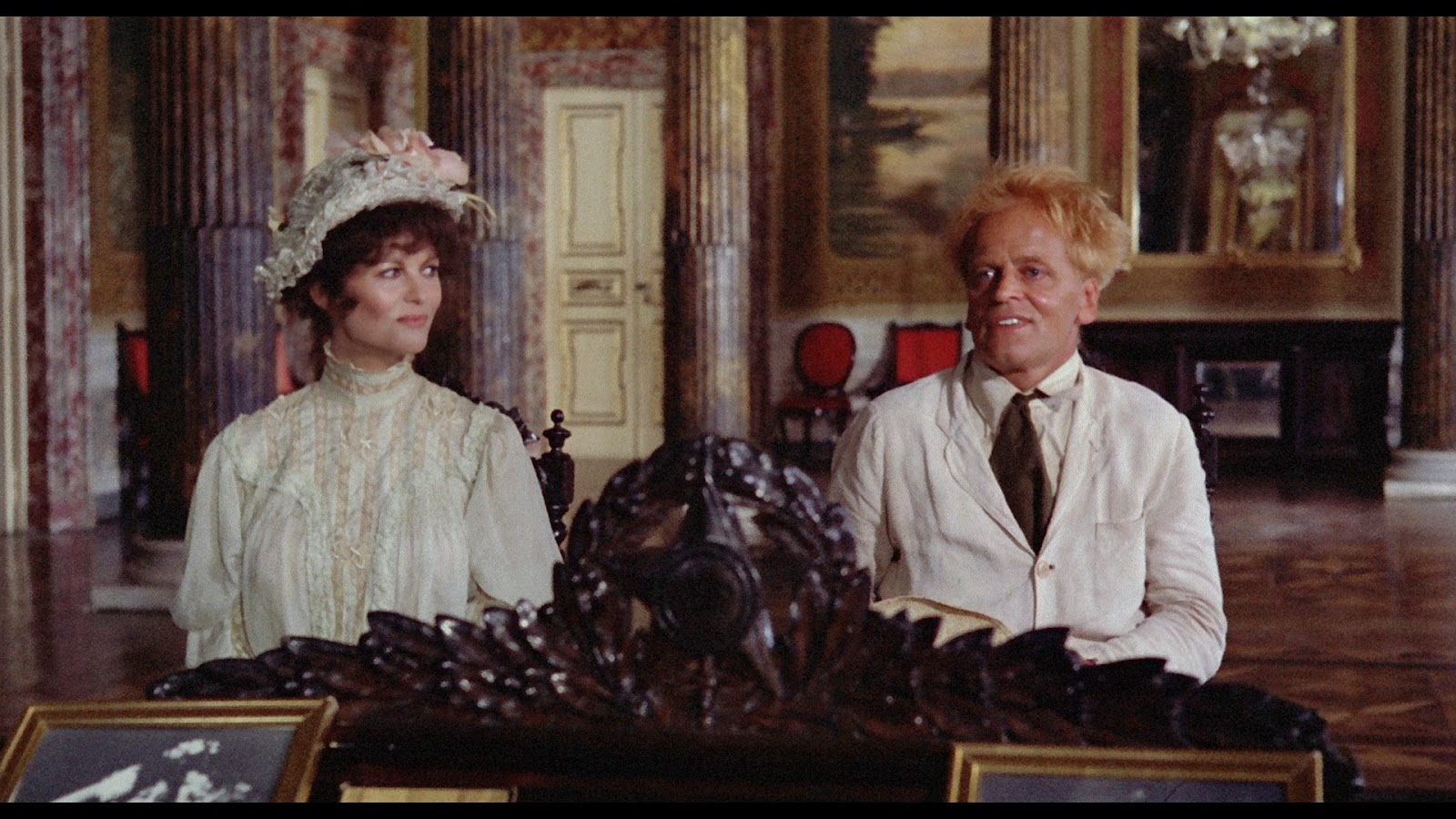 Slow getting started, "Fitzcarraldo," tells the story of an Irish-born man in love with one thing: the opera. In order to get his dream of staging an opera in the jungle he needs to make money. Rubber is the answer. At this time in the Amazon regions of Brazil and Peru, men were striking it rich by extracting rubber from the rubber tree. A plan is hatched. With the help of his girlfriend, Molly (Claudia Cardinale), the madame of a successful brothel in Iquitos, Peru, in the early years of the twentieth century, Fitzcarraldo buys that parcel of land and a 300-ton steamer. The problem, though, is that in order to get to his land and bring the rubber back to Iquitos, Fitzcarraldo must literally drag the gigantic ship over a small mountainous inlet between two rivers. There is also the much discussed problem of messing with untouched, indigenous lands still full of indigenous peoples, of messing with the lore of the jungle itself.

The journey is long and slow. The early assembled crew effectively mutinies, leaving only the captain and the cook. A local tribe shows up and joins in to help them. We watch in awe as this whole process is documented.

The word documented is correct here. Instead of using special effects, as the late Roger Ebert noted, Herzog actually drug the friggin' boat over a mountain. This speaks to the lore of Werner Herzog, a fearless filmmaker notorious for putting his casts and crews through absolute hell to achieve a vision. 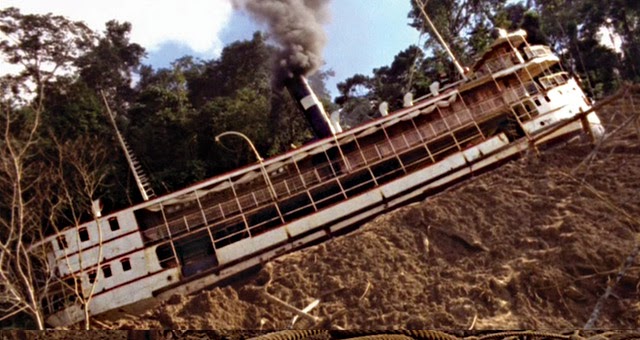 Added to this madness is the quintessential madman and longtime Herzog collaborator, Klaus Kinski. He plays the titular character here with an edge rarely seen on the screen. He is wild-eyed and white haired. He wears a white suit and hat for the entirety of the film. He stares in the face of dread and imminent danger and smiles with his gigantic white teeth. He is a maniac. Like the lore of Herzog in the making of this film, there is equal lore surrounding the casting of Kinski and his erratic behavior while filming. Herzog actually shot footage in a totally different location with Jason Robards and Mick Jagger in starring roles. When the location got shut down and Robards got sick, he scrapped what he had and started over with Kinski, who, throughout shooting, went into fits of crazy and harrassed and even fought with other cast members, crew members, and even Herzog himself.

Of course, the film shows no sign of this struggle in its making. It flows as smoothly and as beautifully as the rivers on which it was filmed. It sings beautiful opera to us as Fitzcarraldo plays his records atop his ship.

We root for this crazy man and his vision in three ways. We root for Herzog in making this monstrous epic, we root for Kinski in tackling this ambitious character, and we root for the character himself and his glorious ambition. 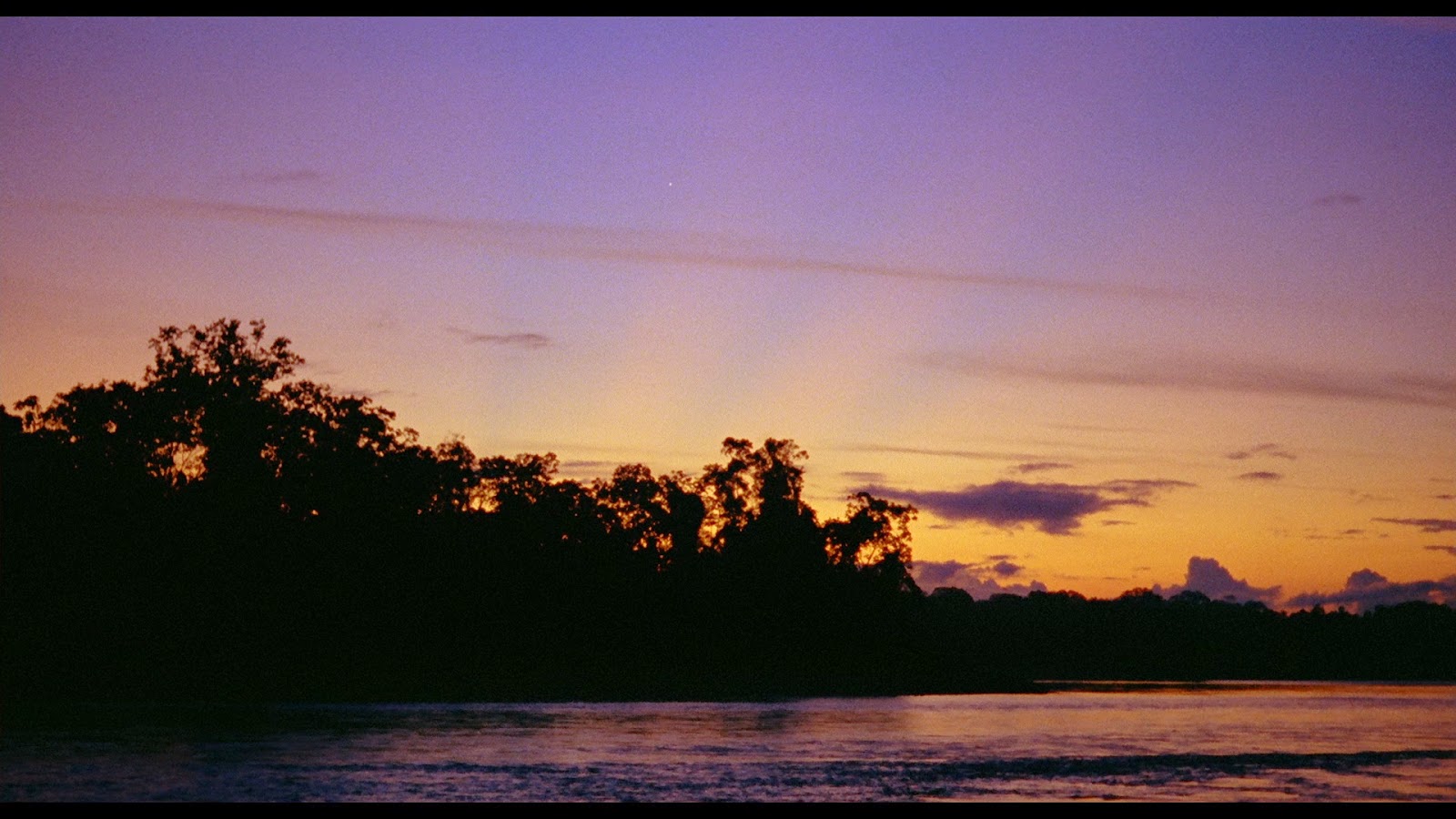 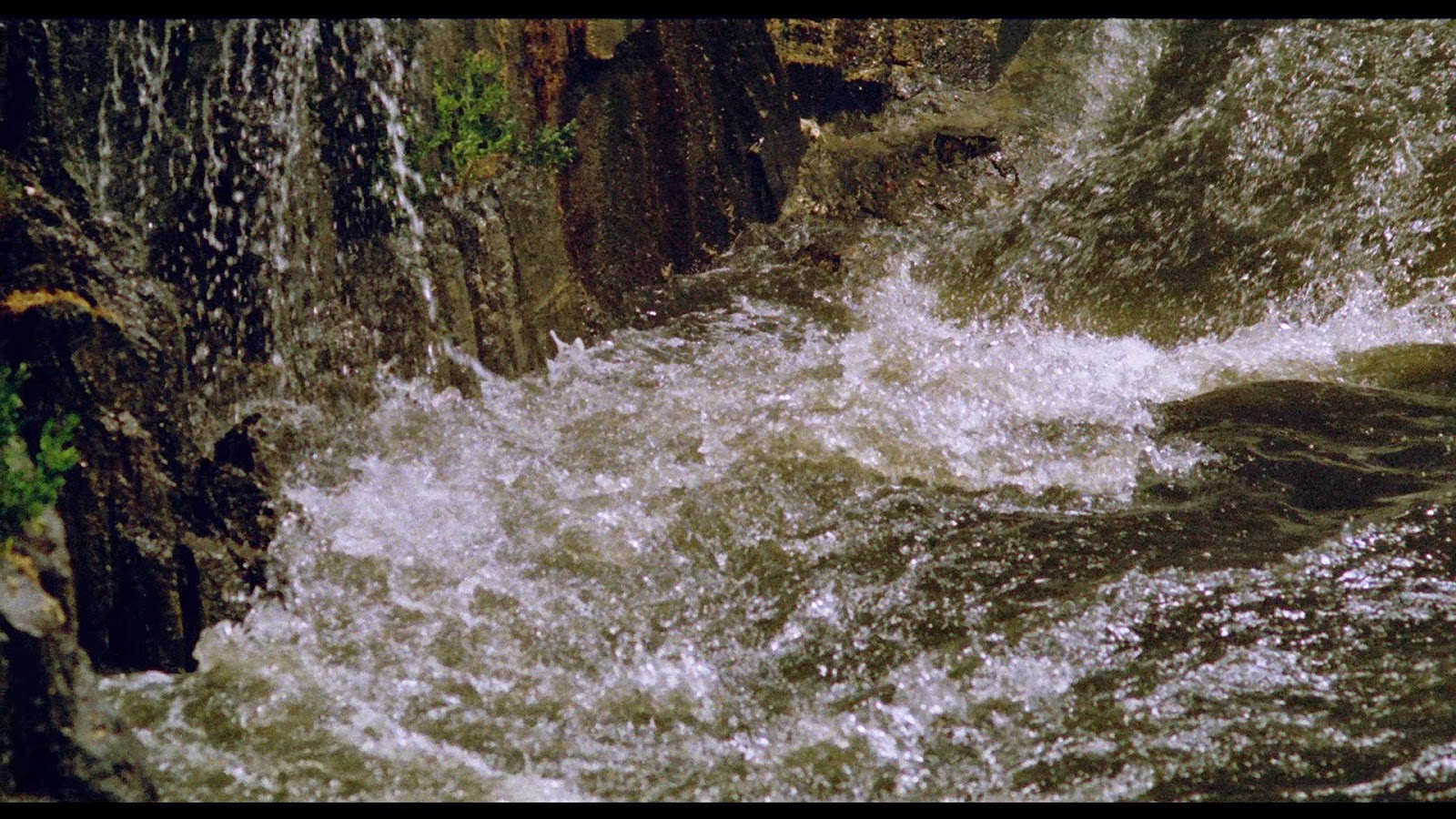 I will admit. This movie runs long. Maybe even a little too long. I found it a bit slow and confusing in the beginning and then it lost me again at the very end, though the final scenes are quite beautiful.

I wonder if Francis Ford Coppola's struggles with making "Apocalypse Now" (1979) influenced, or even entered the mind, of Werner Herzog when he set out to make this seemingly impossible movie. Like "Apocolypse Now," the making of "Fitzcarraldo" is documented in a film released later, showing the struggle of all involved in the process of making this thing. Even in story, it draws obvious comparisons.

I also found an interesting parallel to Wes Anderson's one true huge budget epic of waters in "The Life Aquatic with Steve Zissou" (2004). I mean, you have a crazy German character named Klaus (Willem Defoe), and you have a mirroring scene of the ship owner in Steve Zissou (Bill Murray) asking those who want to stay to cross a line. Maybe I just always have Wes Anderson on the brain, but I can't help but think that Baumbach and Anderson were well aware of "Fitzcarraldo" and the work of Werner Herzog in writing that film. 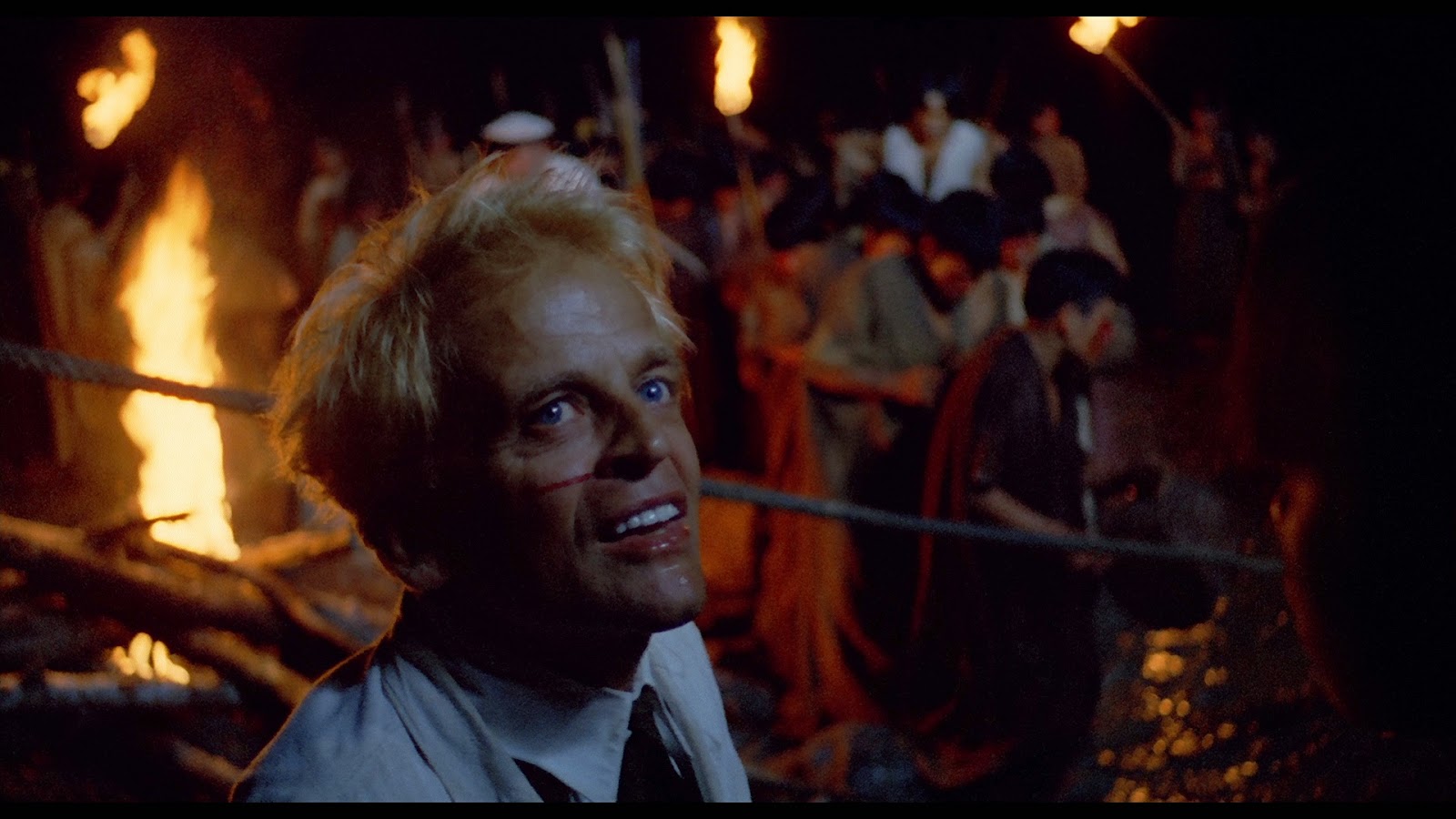 Like Herzog's "Aguirre, The Wrath of God" (1972), also starring Kinski, also marred with trouble and fighting and danger, also astoundingly epic, "Fitzcarraldo" gives us a look at a man in Herzog who is simply a master of film directing. I don't particularly find this movie to be perfect, but nothing ever really is.

The opening shot of "Fitzcarraldo" is of a thick fog settling on the mountainous jungles of the Amazon. A title card lays over it that reads, "Cayahuari Yacu the jungle Indians call this country, 'the country where God did not finish his creation.' Only after man has disappeared they think he will return to finish his work."

For two men (Herzog and Kinski) and one hero (Brian Sweeney "Fitzcarraldo" Fitzgerald) with God complexes, I find this quote totally fitting. Nothing is ever finished, even for God, or a god, or the gods. Or is this a statement about the untouched rain forests and jungles of South America that have been razed for profit for centuries? I don't really know. But I do know that watching this film was one satisfying movie experience that I'm glad to have finally experienced.

**Note: Screen Captures (except the one of the boat), and a large part of the thanks for the crafting of this essay, from the Blu-ray review at DVDBeaver.com.