Love is in the air again for this week's installment of Wandering through the Shelves' Thursday Movie Picks.

The "Romantic Comedies" -- When done right, they can become your favorite movies. The sad thing is that so many aren't done right. It's a genre that can easily become cheesy and predictable. The best ones have to find the right blend of truth, charm, a touch of drama, and real human comedy. Care must be given to how a romantic comedy ends. Too much perfection is cheap. Too little is devastating.

I feel I've picked a few this week that find the right blend of those aspects. They are true and charming, dramatic and comedic. They are perfect movies.

What can be said about this movie. It's just a masterpiece. The Best Picture Winner that year, it stars Jack Lemmon as bachelor C.C. "Buddy Boy" Baxter, ambitious drone in a New York City insurance firm. In an attempt to make his way to the big office, he starts lending his pad to the executives upstairs and their various mistresses, including Mr. Dobisch (the great Ray Walston) and the head honcho, Mr. Sheldrake (Fred MacMurray). He sacrifices for his hopeful big promotion in the darkest, shortest days of the year, right around Christmas. That as a time setting is perfect for this material (credit to screenwriters Billy Wilder and I.A.L. Diamond) as the loneliness is even stronger around the holidays. Baxter is lonely, lives a lonely life, a life made even more complicated by his crush on the elevator girl, Miss Kubelik (the cutest Shirley MacLaine you've ever seen), but he is a nice man, good spirited and funny. This is the most charming movie I've ever seen. And it's influence on other "romantic comedies" is evident still today. 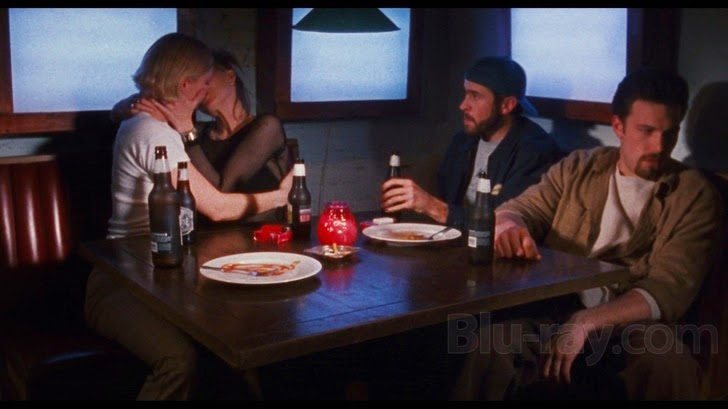 Kevin Smith's best work as a screenwriter, Chasing Amy stars Ben Affleck as Holden McNeil, a comic book artist whose work chronicles the stoner antics of Jay and Silent Bob (a.k.a. Bluntman and Chronic a.k.a. Jason Mewes and Kevin Smith). He works and lives with his foul-mouthed best friend and "tracer," Banky Edwards, played by Jason Lee, who is probably the best actor period for Kevin Smith's dialogue. At a local ComicCon, Holden meats Alyssa Jones (Joey Lauren Adams), thinks he has a chance, only to find out...dum dum dum...she's a lesbian. There is a scene recounting battle scars from sexual encounters in high school that is just the most perfectly written comedy ever, and, then later, a heartfelt and equally perfectly written profession of love that is unmatched in any "romantic comedy" I've seen.

When asked by Marc Maron in a recent interview, "What's that about?", Paul Thomas Anderson could only say, "Love, baby." Punch-Drunk Love is one of the most pleasing movies I know. It's weird, sort-of sad, also about a lonely, awkward guy, who just doesn't know how to deal with pretty much anything in his life. The guy is Barry Egan (a perfectly-cast Adam Sandler), owner of a business specializing in novelty bathroom fixtures and equipment. In addition to being an awkward loner, he also has to deal with his seven domineering sisters, one of whom sets him up with Lena (Emily Watson), a woman charmed by Barry's boyish innocence. As his life begins to unravel in the wake of one fateful call to a phone sex line, his love story (and a newfound passion for Healthy Choice pudding) begins. 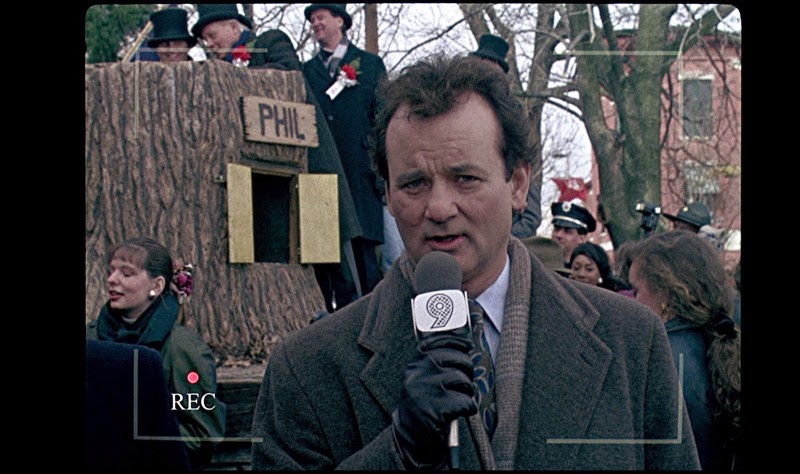 Since Monday was the day of all days of all days of all days that means very little, I am bound to remember one of my top ten favorite movies of all-time, the Bill Murray/Harold Ramis comedy Groundhog Day. Murray plays Pittsburgh TV weatherman, Phil Connors, a cocky, sarcastic jerk, who travels to Punxsutawney, PA, every year for the famous Groundhog Festival. When a blizzard hits outside of town, he finds himself stuck in this town he hates for another day...to say the least...and must learn how to make himself a better man and win the love of his producer, Rita (Andie MacDowell). The brilliance of this screenplay and Ramis' direction is in the fact that this flick is immensely re-watchable. In fact, it must be seen over and over. I've seen it a dozen times at least, and I still can't keep the timeline in order, or how much time actually passes. It is just beautiful, hilarious, and ultimately..."romantic."

The Balder & Dash blog over at RogerEbert.com is featuring Ebert's "Great Movies" review of this classic. It's miraculous. Head over there by clicking here, and check it out!