There's a three word sentence in this film that seems to get all the credit:  "We rob banks." By the time Bonnie Parker (Faye Dunaway) repeats this line upon meeting gas station attendant C.W. Moss (Michael J. Pollard), I was already enraptured in another three word sentence uttered early on by the second of the titular characters, Clyde Barrow (Warren Beatty):  "You're a knockout."

And it is. And she is. And he is. And everything about this movie is a knockout. From the French New Wave inspired cinematography and editing to the classically Americana repetition of Flatt and Scruggs' "Foggy Mountain Breakdown" to the sheer "babe" (as a friend of mine put it in an Instagram conversation yesterday) quality of Dunaway and Beatty, this movie is visually unforgettable. A knockout. 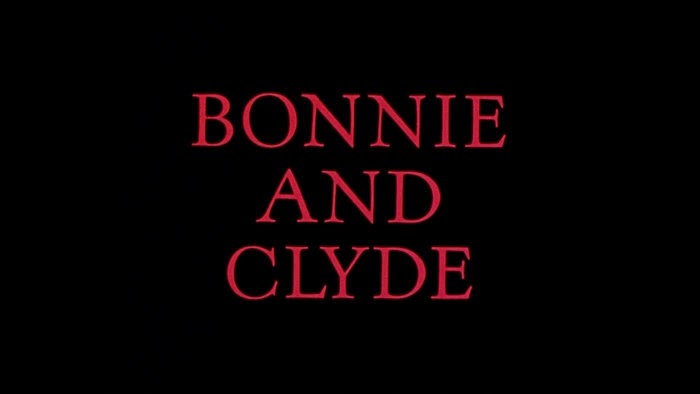 Few movies represent something as culturally iconic to a certain generation in this country. It really works that angle on two levels. Take somebody the age of Warren Beatty, for example. This would be a person born just after the real Bonnie and Clyde were ambushed and killed. Like the lore of Jesse James to the turn-of-the-century kid, this is the lore of the 30s and 40s kid. Co-writer Robert Benton totally copped to that fact in an interview for the DVD special features. Also, there's the free-lovin' hippies of the summer of 1967 (exactly when this film was released in American cinemas). I mean, what are Bonnie and Clyde as played by Dunaway and Beatty? They're not smooth, professional criminals. They're disillusioned young people rebelling against a broken society not offering a place for them to succeed.

It's hard not to be totally taken in by this film, even from the start. The shutter opens and closes on a slide projector showing old photographs in between title cards. Then, we meet Bonnie Parker in her bedroom with not a stitch of clothing. She's bored. She hears something outside, a "boy" is out standing by her family's car. She knows she's caught him about to steal it. He smooth talks her down the stairs. The first look between Bonnie and Clyde is love. 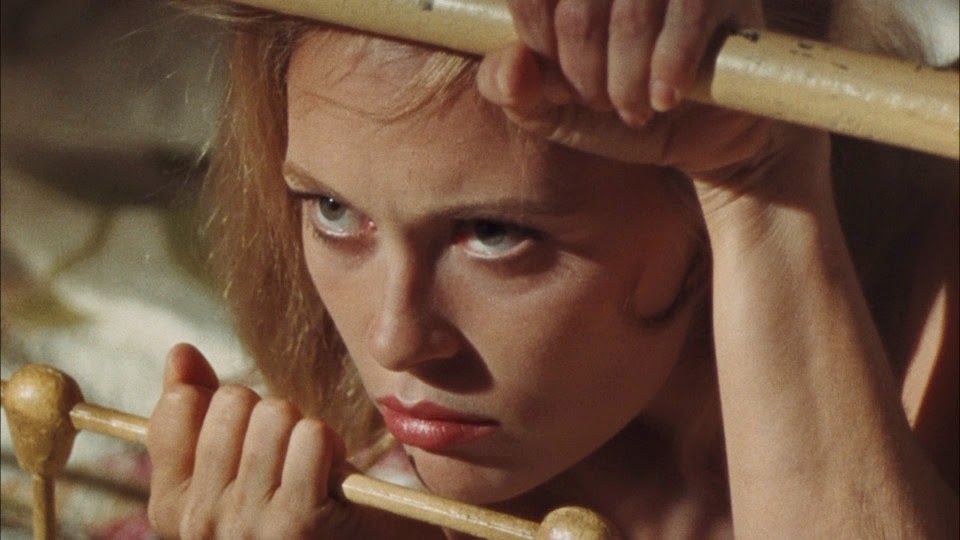 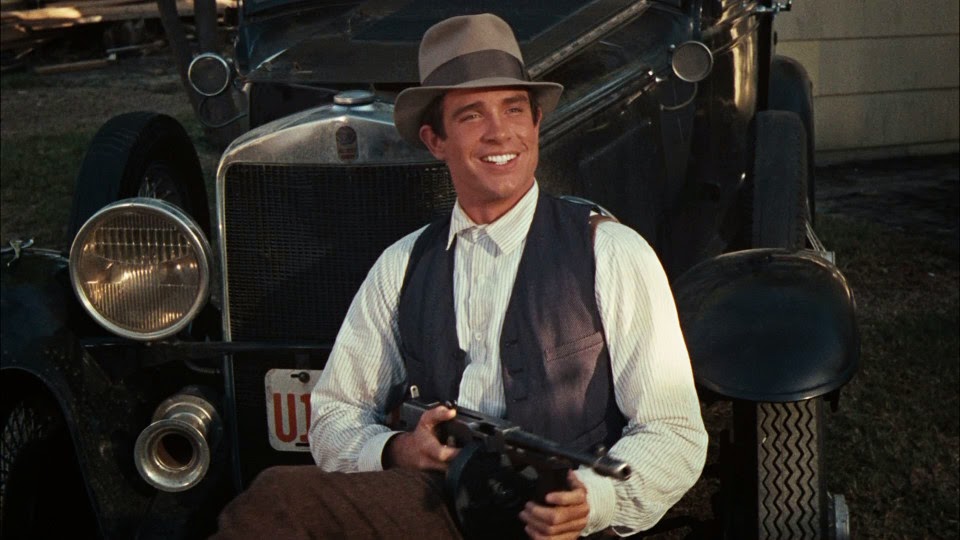 Faye Dunaway and Warren Beatty are two of the most beautiful people to ever grace the movie screen. This opening sequence makes us sure of that. This also simultaneously romanticizes and sexualizes this story. The real Bonnie and Clyde were younger and not as attractive, but its almost certain they had sex. The movie Bonnie and Clyde are older and gorgeous and a sexual dysfunction drives the story.

As played by Warren Beatty, Clyde Barrow is a man latching onto an ideal more than a desire for money or sex. The same goes really for the small family he puts together over the course of the film. Of course, the first to attach to him is the bored Bonnie. As played by Faye Dunaway, she seems almost the exact opposite of Clyde. You sense, as the violence goes on and on, as Clyde brings more and more people into their world, that she wants a simpler life. She wants to be alone with him. Alas, he is impotent. His release is the adrenaline of a stick up or a bank robbery.

The original script had Clyde as a bisexual and the relationship with the C.W. Moss character being more of a second love interest. Enter director Arthur Penn, who had turned down the project early on, along with Francois Truffaut and a dozen others, due to its extreme violence and odd sexuality. Penn finally took on the project shifting the bisexuality into sexual dysfunction. Even still, the audience wonders about this part of the Bonnie and Clyde dynamic. After their first heist, Bonnie jumps him from the passenger seat as he drives the getaway. He pushes her off. "I ain't no lover boy," he says. This is one of the curiosities of this movie for me. Clyde is attracted to Bonnie, though not really sexually. He loves her and her beauty, as evidenced in that "knockout" line. Yet, he can't make love to her, and she stays anyway. It's as if they both want to live out a fantasy as children. Grasping at an imagined life, a playing of house as children might.

Oh, all of the characters are childlike here. Michael J. Pollard as C.W. Moss, the simpleton, naively believing that there "ain't nobody gonna catch Clyde." Gene Hackman as Buck Barrow, the older brother, the easy-going partier. His melodramatic, preacher's daughter wife, Blanche (Oscar Winner Estelle Parsons), who wants her share the same as everybody. Even the cameo from Gene Wilder as Eugene, the car theft victim. He chases the Barrow Gang down and gets taken hostage. Only to sit there, nearly mute, lightly scared, lightly comedic, as only Gene Wilder can do.

The crimes themselves are few and far between. The violence is mostly in the getaways and the several attempts by police at ambushes. But when this movie is violent, it certainly is, especially for the time. My Mom still comments on this movie's violence as if she hasn't seen a movie since. Something about it people remember. It's hard not to remember the law man jumping onto the side step and getting shot through the window glass. Same for poor Blanche. The blood is super red in this movie.

When Warren Beatty came on board with Warner Bros. to make this movie as star and producer, he and the screenwriters certainly agreed that they had somewhat of a French film. They went after Truffaut, then decided, hey, we have a French type of movie, let's get an American director. They ended up with Arthur Penn. Penn was a great choice. The movie certainly has the look, the cinematography, the pacing, the editing, the aloofness in attitude of something from Truffaut or Godard. The montage of bank robberies and interviews with locals and chases and shootouts to that famous bluegrass tune is one of the finest of its kind ever assembled. It influenced so many. The one on my mind right now is Joel and Ethan Coen's O Brother, Where Art Thou?

There's a moment in the bank robbery/chase montage when the gang enters a bank, begins the stick up and Clyde sees an old man, a customer, with some cash in front of him. He asks the old farmer, "Is that your money or the banks'?" He lets the man pocket his cash before taking his loot. Later, the old man is seen being interviewed, where he says, "They did right by me. I'm bringing flowers to their funeral." Perhaps the reason we are so taken with the Bonnie and Clyde story, or the similar stories of Kit and Holly in Terrence Malick's Badlands or the amped up, 90's version in Micky and Mallory in Oliver Stone's Natural Born Killers, is that we enjoy seeing people committing crimes not out of evil, but out of a desire for celebrity, a desire for power in a world that offers them none, a desire to be admired.

***Note: I need to give a huge shoutout to my local Big Lots store, where I found a DVD box set of this movie for $7. Most of my knowledge of this movie's connection to the French New Wave and other details about the writing and production of this film comes from the "Making of" featurette on the Special Features disc.