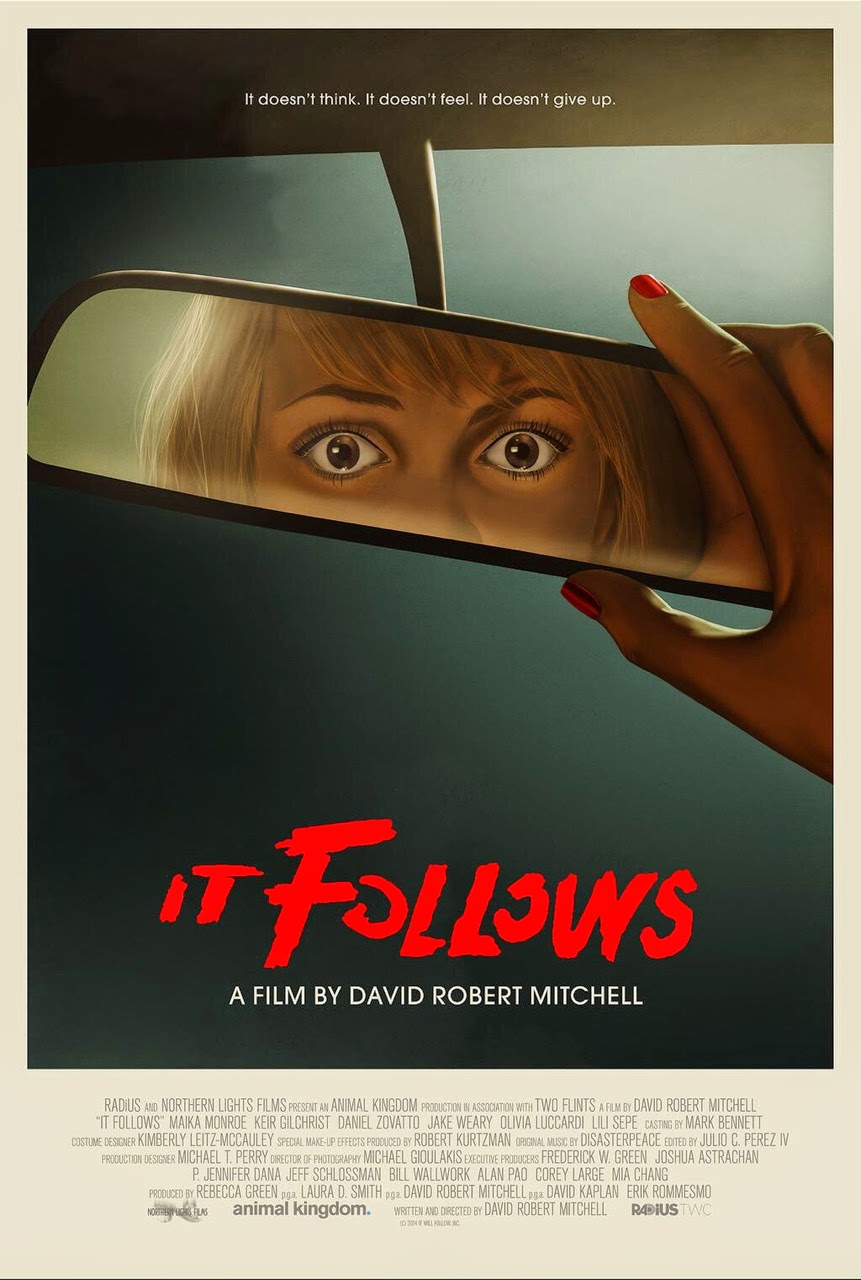 Let us get one thing out there right off the bat:  I almost never seek out horror movies, especially the dime-a-dozen, PG-13 jump scare, found footage, demon possession, etc., crap that's out there these days. But there's a part of me that regrets not seeing more, though, even of those. I certainly regret not seeing more of the classic horror movies pre-"Halloween."

Even for a non-horror kind of guy, when horror movies work for me, they really work. The best horror movies, to me, are the ones that don't offer solutions but simply play on basic fears. The ones that won't let go long after you see them. Only a few "scary movies" really get down to what's really scary to human beings. That being a ghost, or person, or some other entity, or even just a fear inside our own psyches that stalks us.

David Robert Mitchell's "It Follows" is one of those movies for me. As is John Carpenter's gorgeous stalker/slasher masterpiece "Halloween" (1978). And "The Blair Witch Project" (1999), which plays on the worst of this same type of fear:  that something is out there stalking us, even if it's only in our minds.

I'll admit. I went to this movie solely on its ever-present buzz. It currently holds a 95% rating on Rotten Tomatoes and is undoubtedly one of the most well received horror movies of the last decade. There are several reasons for this, which I have discussed with my wife and in my own inner monologue. Above all, it is very clear why cinephiles and critics are so keen on this film. It's different.

The basics of "It Follows" are simple and, then, incredibly frightening in their own right. A 19-year-old girl named Jay (Maika Monroe) lives in a gray, suburban Detroit with a totally absent single mother, whose face is never seen, a younger sister named Kelly (Lile Sepe) and Kelly's always-hanging-around-the-house friends, Paul (Keir Gilchrist), hopelessly in love with Jay, and Yara (Olivia Luccardi), who reads Dostoevsky on a clamshell, Kindle-like device (more on that later).

Jay is dating an older boy named Hugh (Jake Weary), and, after a few dates, the two have sex in the back seat of his car. Afterwards, in a surprising turn of events, Hugh makes it clear that their encounter has transferred a certain type of haunting. It is "this thing," and it will follow you. It may a stranger or someone you love, it may be alive, it may be dead, it will only walk, but it will always be there until you pass it on to someone else. The only way to pass it on...have sex with someone else. What follows is one of the most assured, "slow-burning" (to quote so many reviews I've skimmed), downright terrifying movies I've ever seen.

Then come the first questions: Is this movie, like many horror movies of lore, condemning teen sex? It is making a statement about promiscuity? Loss of innocence? None of these characters seem to be virgins. None of them live in a world of innocence. In fact, this film treats its young hero and her friends in a world of their own. Apart from the random sometimes where the shape-shifting "follower" takes the form of someone older, there are no adults in this film. No parents. No teachers. They are there, but their backs are always turned, their faces always hidden. How interesting...and mind-boggling. This is but the beginning of the questions.

I am finally at the conclusion, now less than 24 hours since my screening, that this movie doesn't want us to answer these questions. No. It wants us to experience its visual and auditory mastery. Its tonal perfection. Its slow, deliberate sense of dread. Its terrifying imagery.

If "It Follows" is any indication, David Robert Mitchell is a visual genius. I haven't seen his first feature, the well-recieved indie teen drama "The Myth of the American Sleepover" (2010). I will be seeing it now.

Mitchell is not just making a horror movie here. He has created a world all his own as channeled through the movie memory of a young man who grew up with, no doubt, John Carpenter's "Halloween" but also many others from horror geniuses, many of whom I'm sure I'm lacking in my own experience.

His camera, as managed by cinematographer Michael Gioukalis, is steady and smooth. Every frame is perfectly filled, even when they simply linger on a flower or the top of a tree. There is always something, or may be something, there. The hood-of-the-car shots Mitchell seems to always go back to represent everything I love about movies.

Earlier today, I read a great review of this film from Jeffery at jdbrecords. He made a connection to Sofia Coppola's 1999 teen drama "The Virgin Suicides," one of my all-time favorite films. It didn't cross my mind, for some reason, but I totally see it. Much like Coppola's debut, this movie loves the Detroit suburbs (where Mitchell grew up). In fact, Detroit itself in all its scary decay is the perfect location for a teen horror film. The production design is utterly fascinating. I love when you can't tell WHEN a movie is. It's pretty much obviously present-day, but then the characters dress like it's the early 80s, the cars are antiques as are the TV sets, there is no texting or iPhones, and then there's that clamshell, makeup compact Kindle thing. WTF!? It's awesome!

Much has been said about Disasterpeace's haunting score. Sure it has. It is one of the best things about this movie. Totally classic. It is the finest match up between movie and score, for me, since Trent Reznor and Atticus Ross' work on David Fincher's "The Social Network" (2010).

There are a few things that don't make sense, but I just don't really care. The pool scene near the end will go down as one of the great oddities in horror movies, but it's still incredibly intense and, when it's all said and done, astoundingly, bloodily beautiful. And the performances from the largely unknown young cast are as deliberate as the camera work and the pacing. Sometimes frustratingly so. But that's obviously a conscious choice in direction from Mitchell and star Maika Monroe is a special talent that I hope to see much more going forward.

When my wife and our friends, another couple, left the theater, we were all sort of laughing in disbelief, not sure what to make of it all. As we made our way to the car, though, something happened. We all started to talk each other in to how much we really were astounded by this film. I'm sure, being the one true cinephile of the group, its effects will be more lasting on me. I don't know how my friends feel at this point, but this night and day I've had to relive this thing in my head has only enriched the experience. I can't stop thinking about it and have looked over my shoulder several times in fear.