Saturday Speaks (and Links): Not a Fanboy Edition 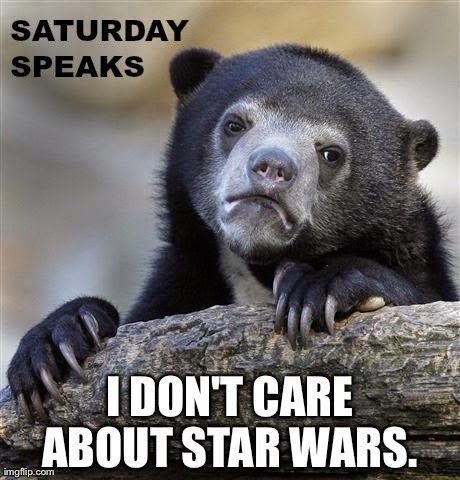 Or do I? That is the question. It shall be answered by the end of this post.

For now, I've missed you, blog world. A few minutes ago, I read a post from Irene at Mysterious Bibliophile in which she said she'd be taking a hiatus for a bit. Life in the way. I'm with you, girl.

Why? First and foremost, I'm a middle school ELA teacher. I am responsible (as if my job depends on it) for ensuring that 12 and 13 year olds (seemingly with no self-discipline) score higher on a harder test than they scored the year before on an easier test.

Yes. That's how it works. The State of Tennessee expects me to take hormone-filled 7th graders (half of whom are new to middle school altogether) and prepare them for an all-or-nothing multiple-choice test. Here's the biggest fear of a teacher like me: What if the kids wake up on ELA test day and just say "F--k it! I'm just gonna guess."

My students like me, though, and I do my best to impart the importance of effort. Truly, I love the kids. They're why I do what I do. Public school is a "don't hate the player, hate the game" scenario. Here are some random Tuesday end-of-class selfies: 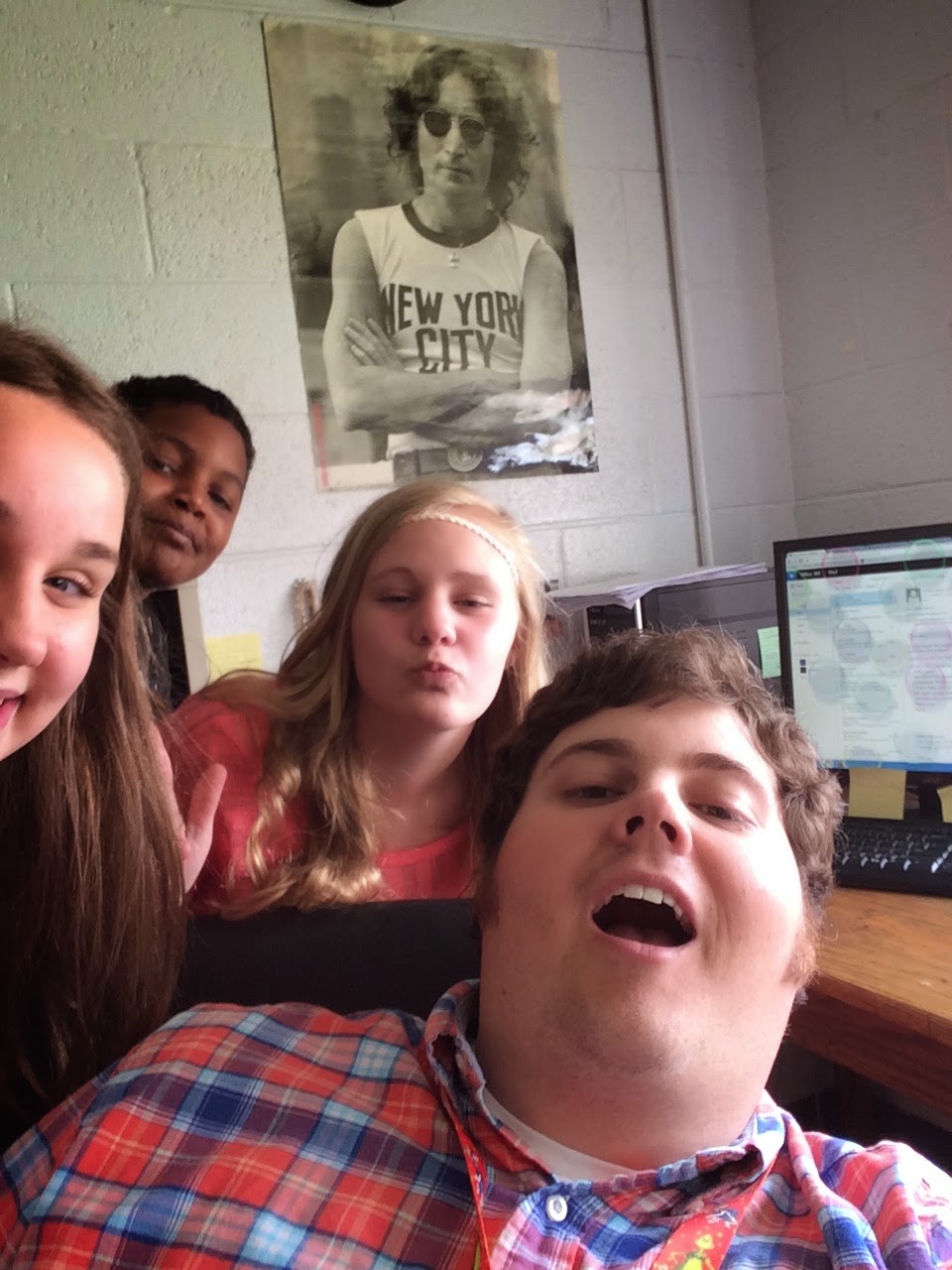 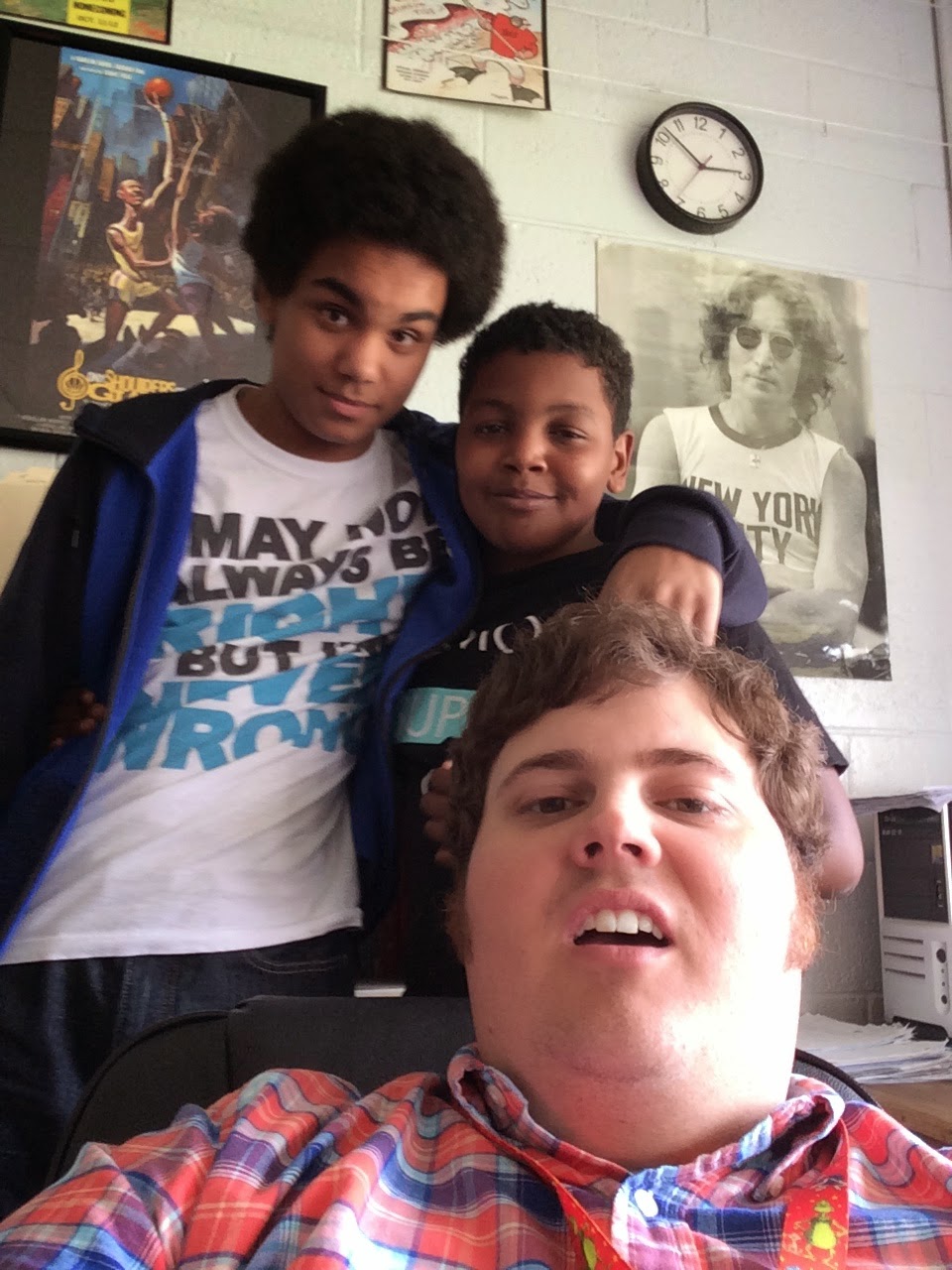 My plate also contains a side of Golf. I am the "Golf Coach" at my school, or as I like to refer to myself--the "Golf Administrator." This simply means that I put the team together, set up a schedule, do a few practices, and get everybody to area matches. So much fun, but most days I don't get home until at least 8 or 9 o'clock.

I also find myself, this time of year, with a lot of good weather to the point where I feel bad sitting inside on a computer when I get home from work. Luckily or unluckily (depending on how you look at it), we've had a lot of work week rain lately (canceling golf matches and giving me just enough time to do Thursday Movie Picks and watch a couple Oscar winners for a forthcoming blogger roundtable).

While the work weeks around here have been wet, the weekends have been immaculate. Alas, no Saturday recap posts. Sorry. But my golf clubs and shoes are in the trunk, and I refuse to sit inside when the sun is shining. Last weekend, I went to Crossville, a small city on the Cumberland Plateau, a.k.a. The Golf Capital of Tennessee, for a weekend "dude's trip" with eleven other gentlemen, including my best friend since birth.

Two nights in pretty sweet condos and three rounds of golf on three of the most beautiful golf courses in Tennessee. A few cold ones, no sleep from all the snoring, morning bloodies, warm sunshine, and my putter was on, for real.


Wednesday. Tax Day? Or Jackie Robinson day? I like the latter better. Not as intense. Even more powerful. Every Major League Baseball player wears #42 in honor. That's the stuff.

While I'm on the topic of baseball, we have spent a good bit of our tax refund on our Memorial Day Weekend trip to four MLB parks. We also got our plane tickets for Denver in August, where we will see My Morning Jacket at Red Rocks. Boom! 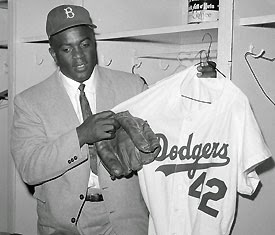 I need to go back in time to the week before this past, where I tried to go to a high school baseball game at our local minor league park, home of the AA Cubs Affiliate Tennessee Smokies, failed, and ended up here: 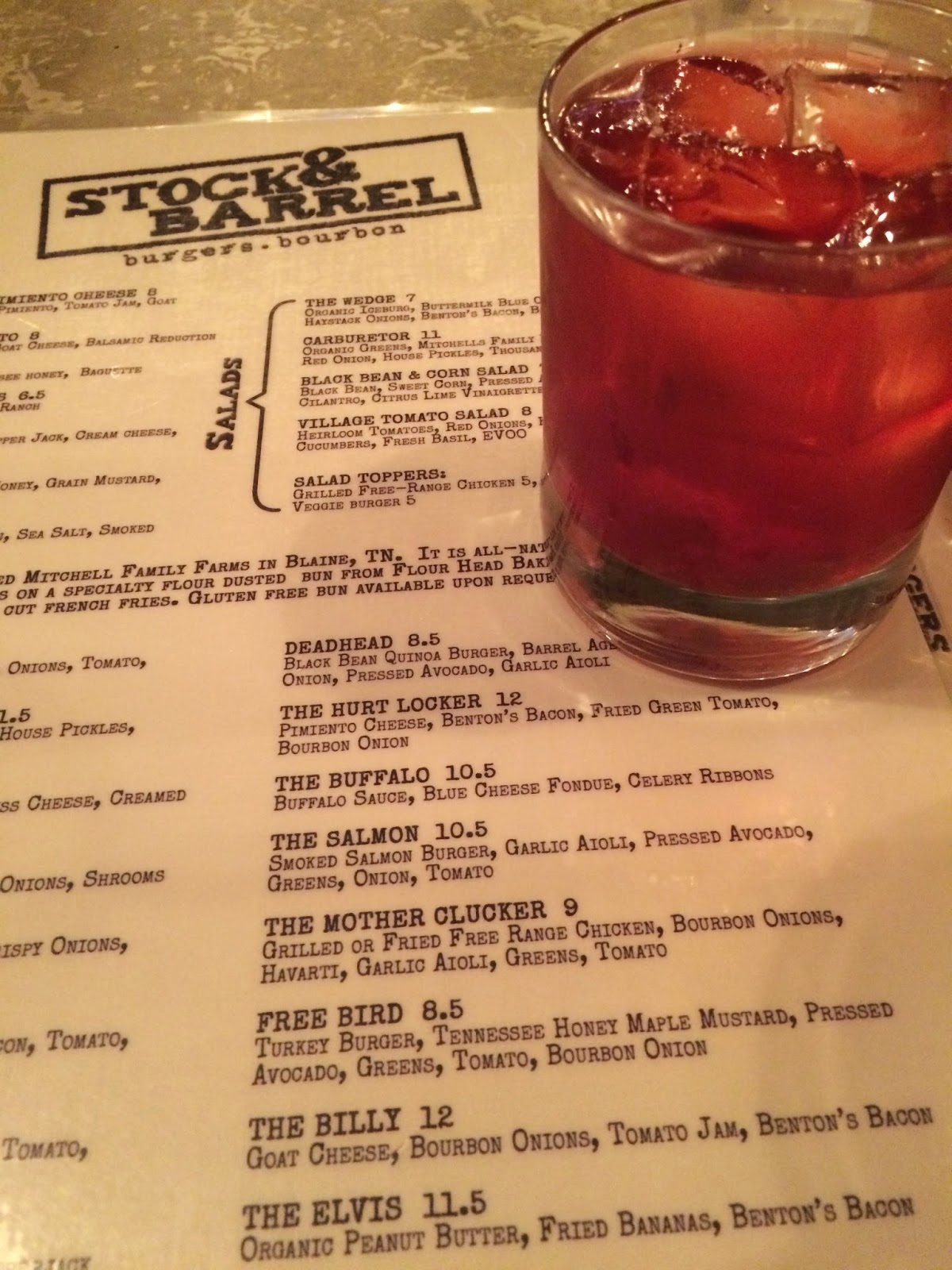 This is the best restaurant in Knoxville, TN. That's an Old Fashioned and a sampling of some of the magnificent burger options at Stock & Barrel. If you look closely, you'll notice a burger called "The Hurt Locker." Excellent name. Ridiculous toppings, including the world-renowned choice of top chefs, Benton's Bacon, cured and smoked an hour from my house in Madisonville, TN. 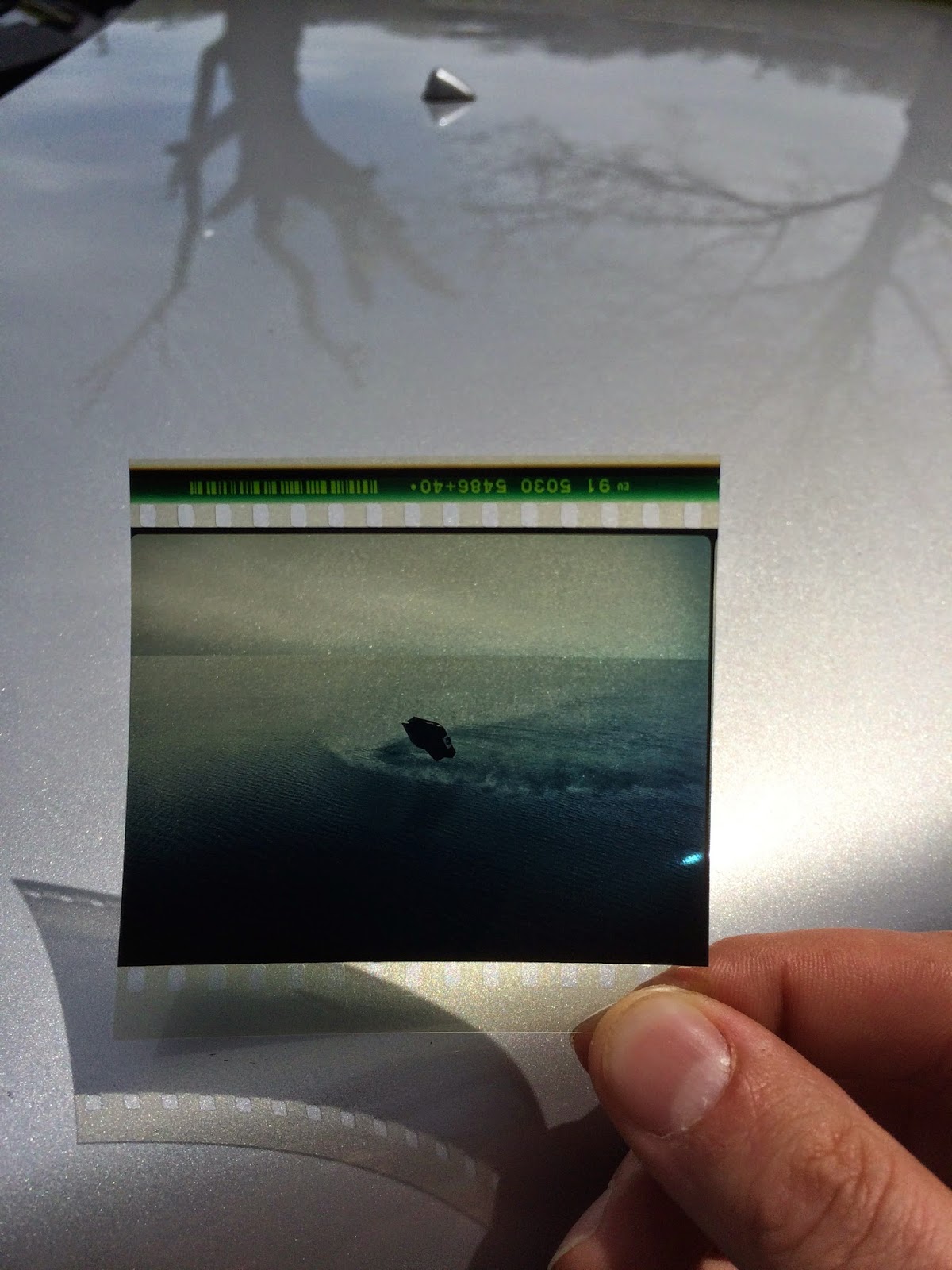 I did something I rarely do. I bought a brand new Blu-ray. Chris Nolan's Interstellar, yeah I went italic on that title, been teaching some MLA style to my students and this film is truly a work of art. And the Blu comes with a cereal box treat for the fanboy in all of us. A 70mm film cell. I got a sweet one.


I have watched 68 movies so far this year, of which 26 are re-watches.

To say I'm excited about Colin Farrell's mustache and brass knuckles is the understatement of the year. Yes! The Best Show on Television that is True Detective is one day closer to airing every day. This trailer is magnificent, if just a short tease. That last shot though!

When I was about 15, George Lucas and Co. updated the original Star Wars trilogy. I saw the first with my Dad in the theater. Got the trilogy on VHS. Watched the first and Empire, and, by the time I got to Jedi, gave up. I've still never seen it. Never watched the prequels. Now, J.J. Abrams is making the next installment. I don't know what will become of this, but I do know that this trailer is good and I will be seeing this. That last shot though!

I don't care that Ben Affleck is playing Batman. I think it's a good casting choice, and I love Affleck. But this movie looks as shitty as Zack Snyder's Man of Steel actually was. This is the last I'll talk about this until this comes out over a year from now.

Fisti at A Fistful of Films does 1982 and gives it all to Blade Runner. Now I have to see it for the first time finally.

Katy at Girl Meets Cinema Blind Spots Tarantino's Reservoir Dogs. I'm envious, though I liked it more than her.

Wendell at Dell on Movies reviews Mockingjay, Part I.

Nathaniel at The Film Experience does a Hit Me With Your Best Shot on Scorsese's Taxi Driver. I really wish I had been able to participate in this one.