Without a doubt, there is an attitude toward police of mistrust among many people in this country. That has most likely always been the case. Police forces breed corruption. Citizens don't trust them. Criminals don't respect them (for the most part). And rightly so. They beat and/or shoot people to death. At least, that's what we hear on the news. That's what possesses us. The sensationalism. It's what we talk about in this life, and it's what we love in our movies, especially our movies about the police.

Of course, most police officers are good people performing a noble civic duty. Men and women doing a job that really doesn't pay extremely well, despite incredible amounts of danger and sacrifice. Crappy (and long) shifts. Tons of paperwork. And, in the case of most American cities and towns, not a lot of action, which can turn bad in and of itself (I won't go there.).


I have the utmost respect for the "good cops" out there. The "bad cops" and the fine lines they ride are what make great cinema, though. Either way, it's hard to tell "good" from "bad." Sometimes there just needs to be a bit of both.

So, yeah, my picks this week as part of Wandering through the Shelves' Thursday Movie Picks Meme deal with the inner-workings of police departments. Bureaucracy, scandal, corruption, murder. The stuff that blends "good" and "bad" and vice versa.

Here are my Thursday Movie Picks in the category of Police Movies:

A rare documentary for you this week, Errol Morris' masterpiece tells the story of Randall Adams, a man accused, convicted, and sentenced to death row for the murder of a Dallas police officer. A crime he most certainly did not commit. Like all of Morris' docs, this one relies heavily on interviews. And he's just so good at interviews. He is most interested in what people have to say and how they say certain things. This movie is absolutely gripping and a brilliant indictment of emotion-fueled, but shoddy and downright bad, police work. It also stands as the first collaboration between Morris and composer Phillip Glass, whose score will stick with you for the rest of your life. 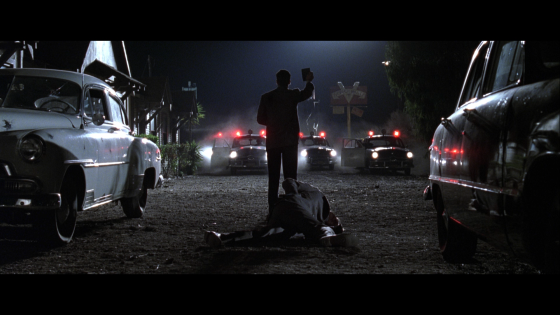 Hollywood. 1953. A series of episodes on Christmas Eve introduces us to three LAPD officers: the hardened tough guy Officer Bud White (Russell Crowe), the Hollywood smooth operator Sgt. Jack Vincennes (Kevin Spacey), and the self-righteous political player Lt. Ed Exley (Guy Pearce) as they find themselves embroiled in a multiple murder investigation involving ex-cops, the mob, and  hookers made to look like movie stars. The greatest thing about this movie, apart from its perfect production design, is how, no matter how many times you see it, it always surprises you.

To read my essay on the film, click here.

An adaptation of the Hong Kong crime-thriller "Infernal Affairs" (2002), Martin Scorsese and screenwriter William Monahan move the story to Boston, a twisty narrative of two "Staties," Billy Costigan (Leonardo DiCaprio) and Colin Sullivan (Matt Damon), and their involvement with South Boston Irish mob boss, Frank Costello (Jack Nicholson), riding the fine line between cop and criminal. This movie is as smooth and entertaining as anything Scorsese and long-time editor Thelma Schoonmaker have ever put together. The performances from the three leads are career best, not to mention the stellar supporting work from Oscar nominee Mark Wahlberg, Alec Baldwin, Martin Sheen, and Ray Winstone. And the surprises that come in this film's masterful third act will never leave me. This is a movie that truly was the Best Picture of that year and was rewarded accordingly. 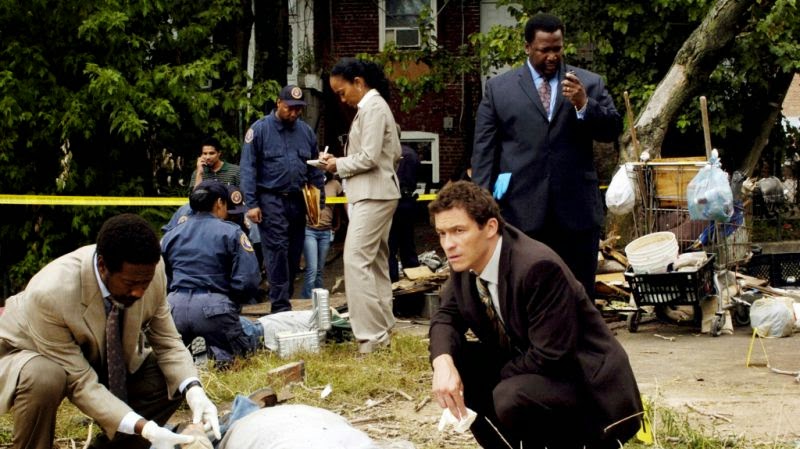 Over five seasons on HBO, David Simon and his team of writers and directors crafted the best TV drama of all-time, a story of a task force, led by the tortured Baltimore Homicide Detective Jimmy McNulty (Dominic West), bent on taking down the devastating drug business that fueled the crime rate in one of the nation's toughest inner cities. With each season taking on a different aspect of the drug trade (the business itself, the seaport system, the government bureaucracy, the school system, and the news media) and how they individually and together seem to perpetuate violent crime more than they hinder it. Just brilliant television and endlessly cinematic (as HBO is wont to do so incredibly). "Oh shit! Omar comin'!"