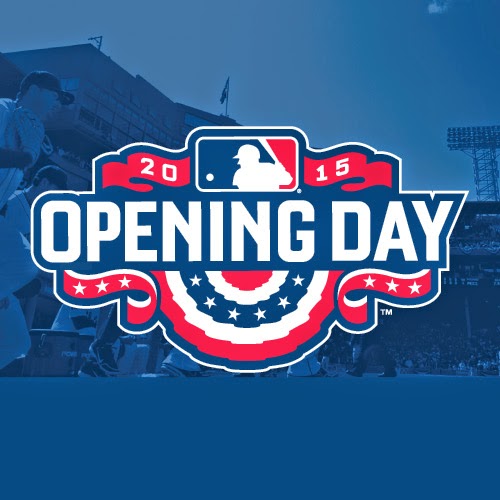 Baseball is my favorite sport, the greatest sport. Sure. Football has replaced it as "America's game." Steroids nearly ruined it. But it is still the best game ever created. It takes not only talent but also immense skill, strength and speed. It is a game that, to paraphrase sports writer Bob Costas, has a pace, a rhythm unlike any other game. It allows for conversation and reflection.

My wife and I have a life goal to visit every single MLB stadium. We've done at least one every year. So far, we've hit nine of them together. Numbers 10, 11, and 12 coming next month. There is just nothing better than sitting in the warm sun with cold beer, a hot dog, and some peanuts and rooting for the home team.

Today is Opening Day. I'm with Ozzie Smith. It should be a federal holiday. We should all be off work and at the nearest ball park. Of course, it's raining here, so no ball would be played at our local temple, Smokies Park, Home of the Chicago Cubs AA affiliate, the Tennessee Smokies. No matter.

Today is Opening Day, y'all! And this is how I feel.

The Baseball Movie is a genre unto itself. There are many great ones. Some stinkers. Just like anything else.

Today is Opening Day, though. And in honor of that, here is my list of the All-Time Top Ten Baseball Movies: 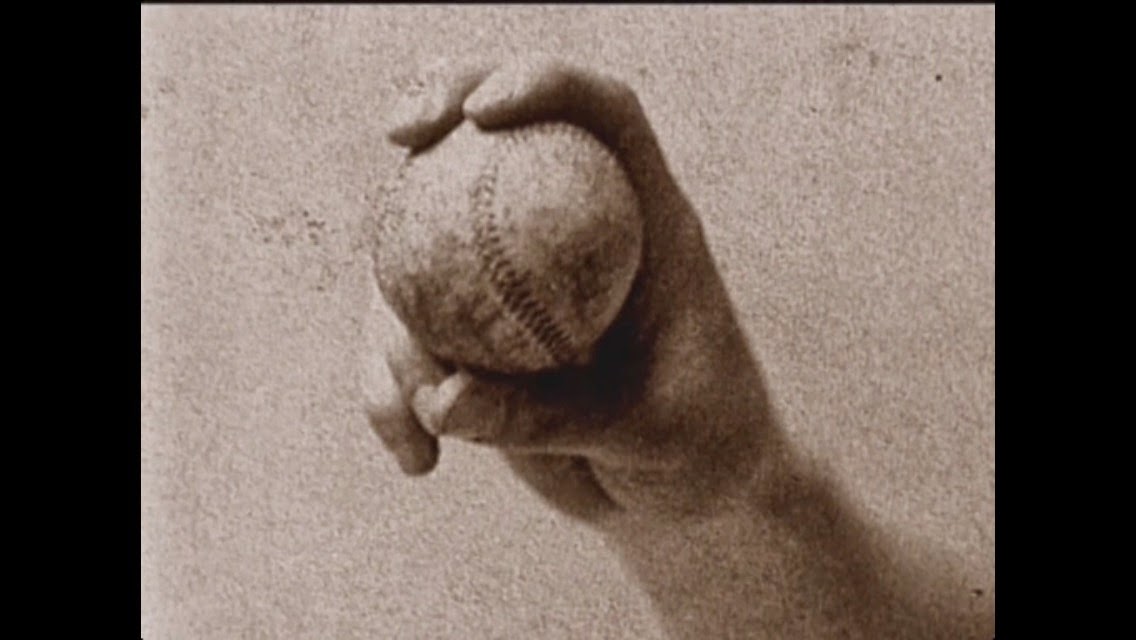 "It is a haunted game, in which every player is measured by the ghosts of all who have gone before. Most of all, it is about time and timelessness. Speed and grace. Failure and loss. Imperishable hope. And coming home." - Ken Burns

Ken Burns' 15-hour PBS documentary on America's pastime is the most beautiful, sweeping, informative documentary I've ever seen. It's a chore to watch, but it will truly make you treasure this game and its importance. It literally covers the entire history of the game. The shot above leads into a segment of narration simply about the ball, the bat, the pitcher and the batter: "The batter has only a few thousandths of a second to decide to hit the ball. And yet the men who fail seven times out of ten are considered the game's greatest heroes." This film is full of that sort of stuff, and it's beautiful! 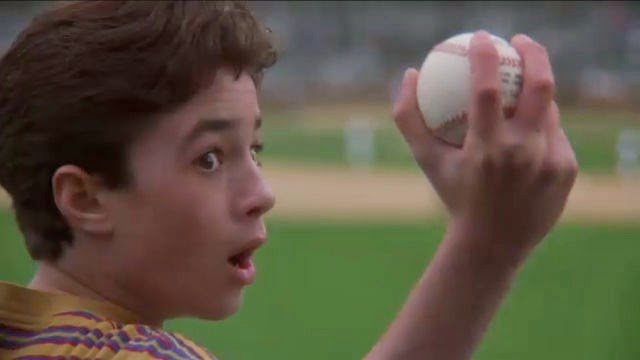 Billy Heywood: The Brooklyn Dodgers had a saying, "Wait 'til next year.'

I was 9 and 10, respectively, when these two movies came out in the early 90s. Their greatness lies in these questions: What if a pre-teen kid pitched for the Chicago Cubs? What if a kid of the same age became the owner/manager of the Minnesota Twins? How would that level of celebrity change them? These two movies were great when I was a kid. They've hardly aged. In the past year, I've seen both of them, and I loved every minute. 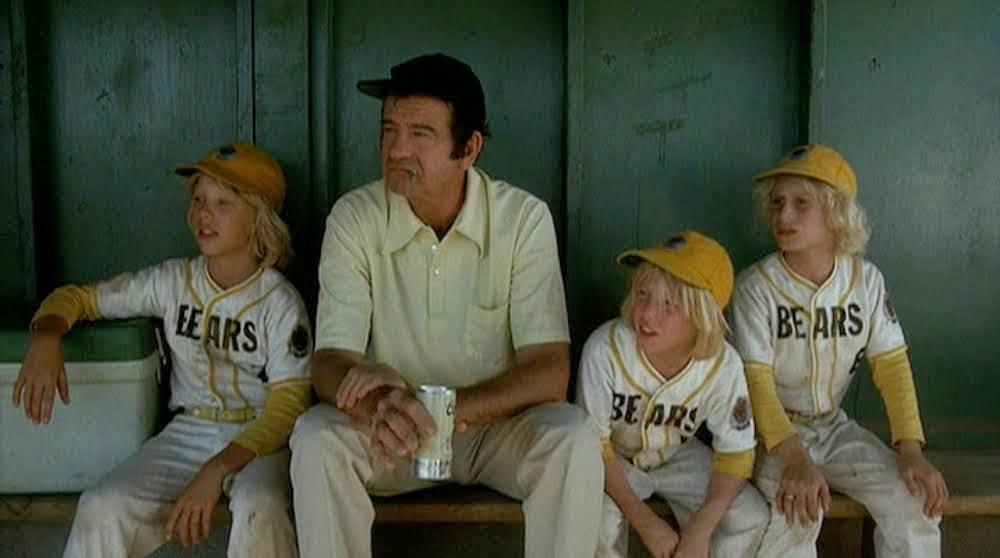 Engleberg: You're not supposed to have open liquor in the car. It's against the law.

Buttermaker: So is murder, Engleberg. Now put that back before you get me in real trouble.

The Bad News Bears stands as one of the most legendary comedies ever made. It is really more of a movie for adults, though middle school kids and up would love it (and probably did/do). Starring Walter Matthau as the drunken, chain-smoking pool man and former semi-pro pitcher, Morris Buttermaker, paid by a local sleezebag parent (Vic Morrow) to coach the worst team in the league, it gets down to the kid in all of us and what it means to be a winner. And, man, are these kids misfits. Featuring supporting work from the great Tatum O'Neal and Jackie Earl Haley (both in their early teens at the time), this movie features some of the greatest one-liners in sports movie history. And that little racist kid, Tanner...so adorable! 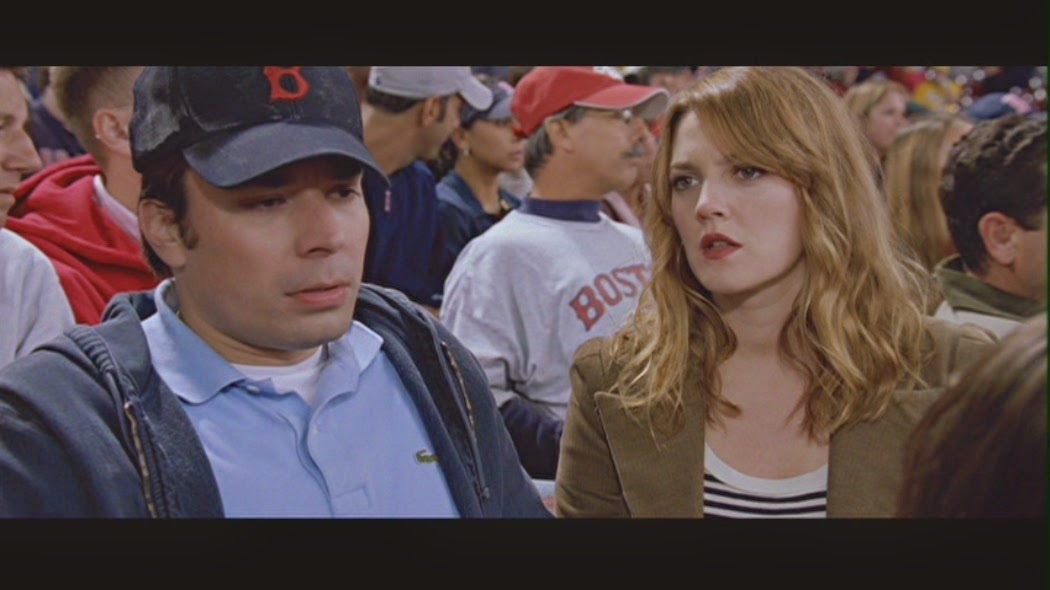 Lindsey: You don't see us tangled up in the sheets with the Eiffel Tower in the background. You see the Mariners are coming in. And Pedro is pitching Friday.

Ben: No, on Saturday. Schilling's Friday.

I can't stand the Boston Red Sox, but I love this movie. Jimmy Fallon plays an uber-obsessed Red Sox fan dating an upwardly-mobile business woman played by Drew Barrymore. This is not only a great baseball movie, but one of the most tightly-written romantic comedies I've seen. It's also one of my wife's favorite movies, one we always agree upon. I have seen this movie dozens of times and it never gets old. It captures the pain and pleasure of being a sports fan better than any other. Fun Fact: the ending was re-shot and the release pushed back because the Red Sox actually ended up winning the World Series the same year this was filmed. 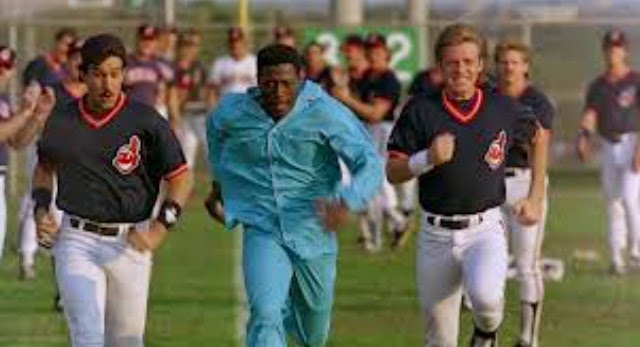 "I guess there's only one thing left to do: Win the whole fucking thing." - Jake Taylor (Tom Berenger)

Major League is another movie I can watch all day, every day, and never get tired of it. It features some of the best cussing of any other movie. From that line above to Rick Vaughn's (Charlie Sheen) glasses to Roger Dorn's (Corbin Bernsen) side-stepping to Harry Doyle's (Bob Ueker) drunken, smart ass commentating, this movie is iconic. It is in the movie memory of even those who haven't even seen it. This is one of my greatest movie memories. My Dad took me to see it in the theater, and I was in love. It works on so many levels. It's a beautiful WWII period drama. It's a baseball movie. It's a comedy. It's a statement for equal rights. I absolutely love it. 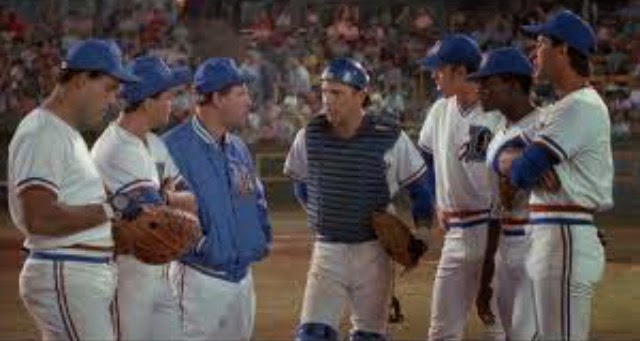 "Relax, all right? Don't try to strike everybody out. Strikeouts are boring. Besides that, they're fascist. Throw some ground balls. They're more democratic." - Crash Davis (Kevin Coster)

Ron Shelton knows how to make a sports movie. He's made some great ones, including White Men Can't Jump and Tin Cup. This is his first and best. The dialogue is hilarious and timeless. It is funny, sexy, smart, original, and endlessly quotable. It is foul-mouthed, minor league, Southern bliss. Nothing is better than Susan Sarandon's "I believe in the Church of Baseball..." opening voiceover. And Tim Robbins is perfect as lanky, dim-witted ace pitcher, Ebby Calvin "Nuke" LaLoosh, being groomed for "The Show."

Tell me one kid who grew up in the 90s who doesn't love this movie. This is a movie about small town kids with big baseball dreams. Kids of a certain time, who idolize Babe Ruth. More than anything it is a story about boyhood in a particular era, the 1960s, yet it remains a timeless treasure for kids of any age in any time. So much of my childhood movie memory stems from this film. I can't wait to share this tale of summer and Beasts and pools and backyard baseball with my own kids one day. 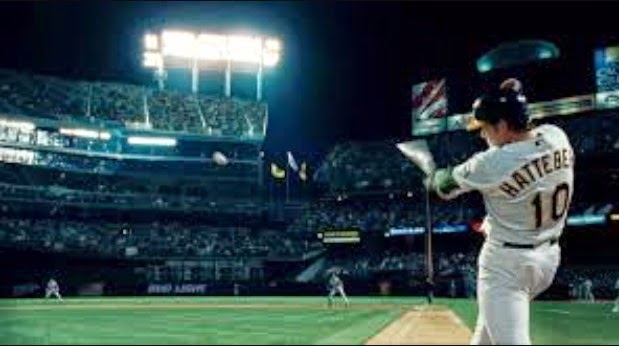 Billy Beane: First base isn't that hard. Tell him, Wash.

Moneyball is what happens when you take a boring non-fiction book on sabermetrics (analysis of baseball statistics in building a team), a practice championed by real life Oakland Athletics GM Billy Beane (Brad Pitt), and get Aaron Sorkin and Steven Zaillain to adapt it. The dialogue is incredible, funny and true. The cast matches it perfectly, specifically Jonah Hill as the whiz-kid Beane brings in to do the math. It's also special in that it takes something as tedious as baseball statistics and weaves a story around it that touches on the game itself, the business of it, the minds of the player and scouts and front-office guys, and brings a human touch in a relationship between a baseball executive and his daughter. Too bad I can't stand Bennett Miller's other movies. He hit this one out of the park. Boom! 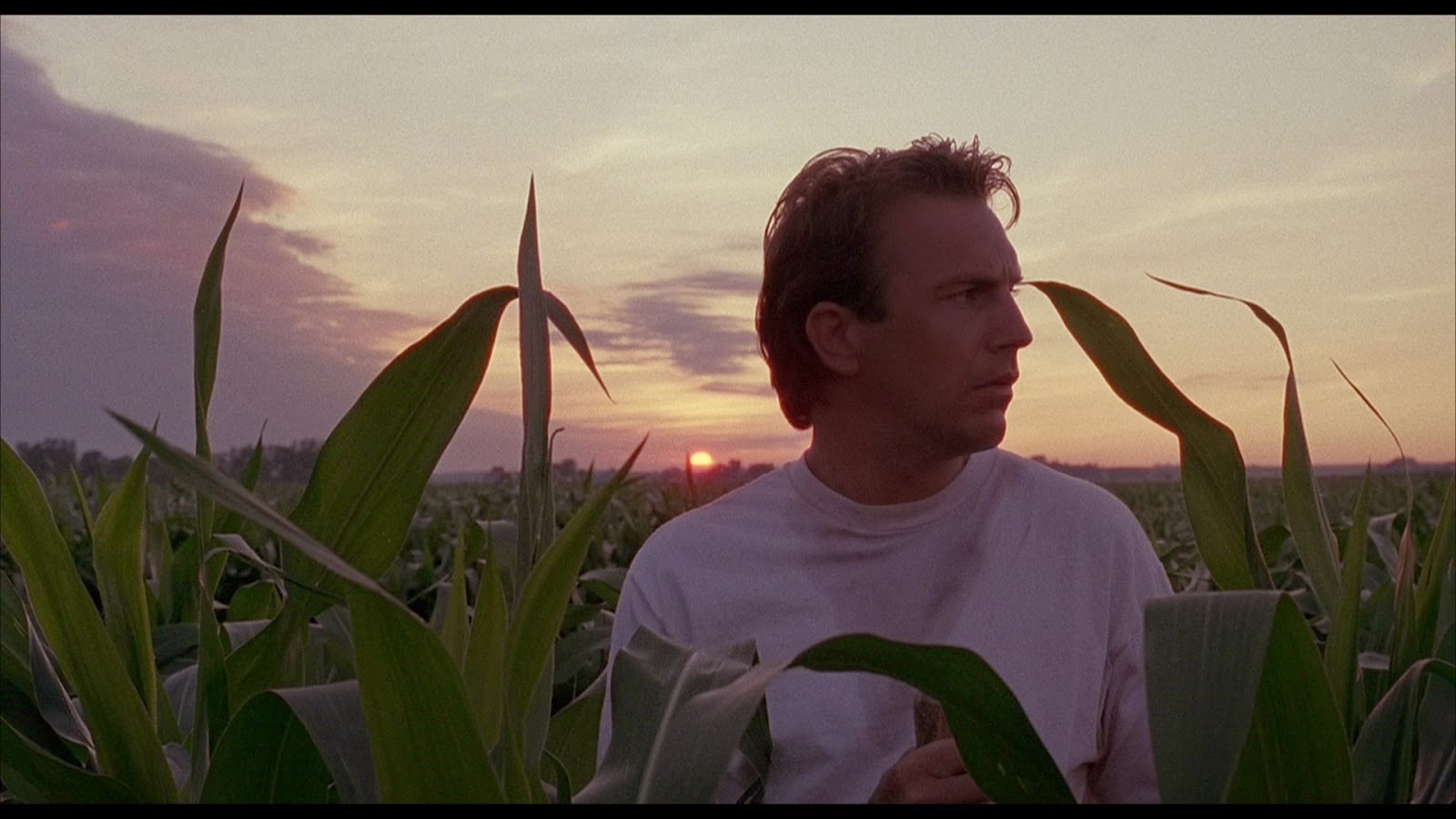 "The one constant through all the years has been baseball." - Terrence Mann (James Earl Jones)

Field of Dreams is firmly in my list of the Top Five Greatest Movies of All-Time. That probably won't ever change. It touches me more than just about any other movie. It is simple, a story of a son remembering his father and the sport that bound them, and also beautiful and poignant and funny and magical. It often gets compared in its kind nature to the work of Frank Capra. I can see that. What sets it apart more than anything though is that it is not about winning or losing. No. It's about the game itself and what it means to all of us. Read my essay on this film here.