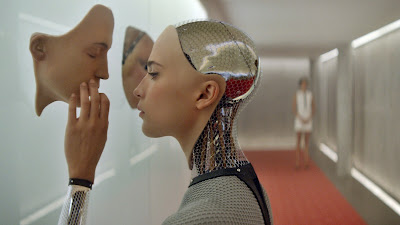 A few days ago, I saw Avengers: The Age of Ultron.

At one point early in the film, Tony Stark (Robert Downey, Jr.) and Bruce Banner (Mark Ruffalo) have a conversation about artificial intelligence. Stark, or Iron Man, the billionaire weapons/technology magnate believes that its time to dust of this old idea he had floating around, like, literally floating around.

That idea was Ultron, basically a technological brain that may have the ability not only to think but also to adapt, to reason, to feel. He and Bruce, who most definitely does not want to get angry though we want him to, are giddy talking about it. There is even an air of concern about the possibilities. Then, of course, since we're in a Marvel comic book movie, everything goes haywire and no ideas are to be discussed any more because that would get in the way of all the shit being blown up. 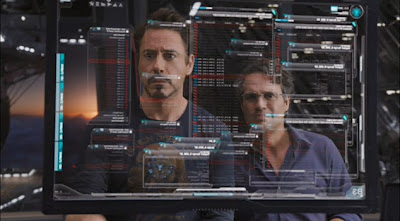 A few days before that, I saw Alex Garland's Ex Machina. A movie where nothing gets blown up. Not a single thing.

Which one was more fun?

The winner of this debate, though, goes to the one that achieves something of so much greatness in a much shorter about of time.

Yes. The A.I. movie of the summer is NOT from Marvel.

No. It's an under-the-radar, low-budget masterpiece of American cinema. It's title is borrowed from the Latin. It's effect is unparalleled.

Caleb (Domhnall Gleeson) is a computer programmer, who works for a Google-esque company called Blue Book. He wins first prize in an office sweepstakes. His prize is a week with Nathan (Oscar Isaac), the founder and owner of the company.

Nathan lives "alone" in such a remote locale that only the wealthiest man in the world could live there. A helicopter has to circle for hours before attempting to land. From the helicopter, Caleb walks through a forest below a glacier to a home built into the side of a hill, where he enters and finds Nathan, bearded, wailing away on a punching bag. "I'm hungover," he tells Caleb. "I fight it with exercise, anti-oxidants..."

Caleb soon finds out he is to a part of something major. Nathan has created a humanoid robot, a woman named Ava (Alicia Vikander). Caleb is to test her, a "Turing test" it's called, a test meant to examine a machine's ability to exhibit behavior indistinguishable from that of a human. The questions fly, the discussions flow along with the beer and wine and vodka Nathan so religiously clings to...

The discussions mostly pertain to questions of attraction and sexuality and betrayal and God complexes. Nathan, as played by the incredible Oscar Isaac, carries the qualities of both eccentric genius and meathead frat boy. He's about mind games and existentialism while at the same time suffering from delusions of grandeur and alcoholism. He is hilarious, manic, maybe even psycho. Isaac's performance proves his place in the new wave of leading men. He fascinates without seeming to try.

Domhnall Gleeson's Caleb can't believe his good fortune, wide-eyed, lapping up every bit of what Nathan is selling. Yet, he brings a thoughtful quality to the character as he is thrust into a relationship with the robot Ava, causing him to truly question his ideas about attraction, intelligence, ability, and even relationships themselves. 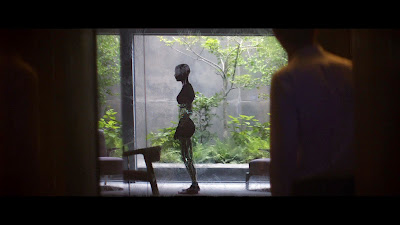 As Ava, Alicia Vikander can take her place at the top of my actresses-to-watch list. She is just perfect, with a face that you just can't look away from. It's no wonder they chose her, it's only her face we see. The rest of her is a genius-level, realistic special effect, making her look like the robot of sci-fi dreams. As she banters with Caleb about her nature, her interests, his past, etc. and as the truths about what Nathan is really playing at comes to light, we come to empathize with her situation.

Now, I saw the new Avengers on a field trip with a bunch of 7th graders. They loved it. Their love for it helped me. The cast is incredible, the special effects are flawless (I'm thinking about you, Hulk!), and I was endlessly entertained. It plays way too long. It could use one less action sequence.

They probably wouldn't love Ex Machina. I saw Ex Machina with my best friend and fellow film buff. We both loved it. Deus Meus! Did we love it! It is easily the best movie I've seen so far this year. It is definitely the first one I immediately wanted to watch a second time.

Awhile back, I skimmed Matt Zoller Seitz's review of Ex Machina on rogerebert.com. His opening line plays into the experience I had with science fiction films this week:

Honestly, I don't mind a fun, futuristic action-adventure. But I adore a movie about ideas.