I am a bit lacking in my German cinema, this week's category on Wandering through the Shelves' Thursday Movie Picks Meme. I really just haven't seen that many. To the point where the films listed below are pretty much the only German-made movies I've seen. There are a few more but these are the biggies.

For my picks this week, I went with three films that I've watched very recently. All three quite dynamic. All three beautifully made. All three true depictions of the talent to be found in Germany. 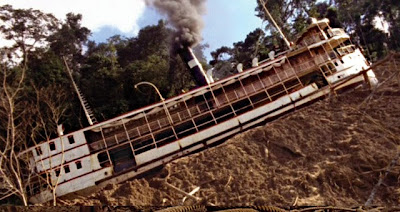 Director Werner Herzog and his crazy actor frenemy Klaus Kinski team up again after the brilliant Aguirre, the Wrath of God (1972), among others, for another trip down a South American river. This time in Peru, where an Irish opera aficionado needs to get at some rubber in the jungle in order to finance his passion project. That shot above: NOT a special effect. Herzog literally had men dragging a full size steamer over a mountain. Enough said.

A German Jewish man and his wife fleat the Nazis and their home to a farm in Kenya with a pre-teen daughter. The heart of the story is in the parallels between daughter's coming-of-age and her mother's various attempts to cope with her new life over the years. It's not perfect as a whole but it certainly has its moments, and it is one of the most beautifully shot movies I've ever seen.

The Lives of Others (Florian Hinckel von Donnersmarck, 2006)

Early 1980s. East Berlin. A dedicated and well-respected Stasi interrogator and surveillance expert finds himself conflicted when given the task of spying on a famous playwright and his actress girlfriend. This is a masterpiece. One of the most satisfying experiences I've ever had. 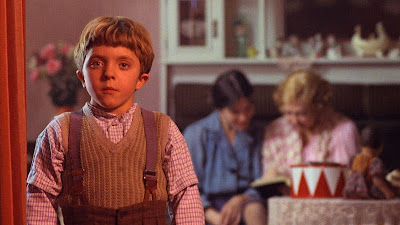 Based on the novel by Nobel Prize winner Günter Grass (which I HAD TO read for an upper division European Lit course in college), this Palm d'Or and Oscar winner tells the story of a boy named Oskar, his sordid family history, and his will to stay small forever as the Nazis rage through Eastern Europe. The movie doesn't work nearly as well as the book, but it gained some attention for being banned in several places in the U.S. and Canada due to its unapologetic adherence to the challenging sexual situations in its source material.

Email ThisBlogThis!Share to TwitterShare to FacebookShare to Pinterest
Labels: German Cinema, Nowhere in Africa, The Lives of Others, The Tin Drum. Fitzcarraldo, Thursday Movie Picks