Remember when you were a kid, a young teen perhaps, maybe even middle school age, and you're with your friends and and they're all always talking about something you seriously just don't get. For me, that was WWF wrestling. My friends were all "Did you watch Raw last night?" And I'm all like, nodding my head in silent agreement. I just didn't get it. I did not "smell what The Rock was cooking." And "that's the bottom line because", well, I said so.

I sometimes feel that way about movies I'm seeing for the first time that are deemed "great" or "classic" or "masterpiece." It's almost like dealing with peer pressure.

And that's partially my reaction to Rainer Werner Fassbinder's low-budget 1974 love story Ali: Fear Eats the Soul. I get it for the most part. But as far as "this is one of the best movies ever"...I'm only part of the way there.


I suppose I first read about this movie years ago in one of Roger Ebert's Great Movies books. It seemed like an odd title but definitely a title for me. I'm all in for odd little love stories. And definitely for small, challenging films. Ebert loved this movie, like, a lot. And many many people do as well, so I've read. So, now that I'm being told by so many how much I'll love it, how do I feel about it? 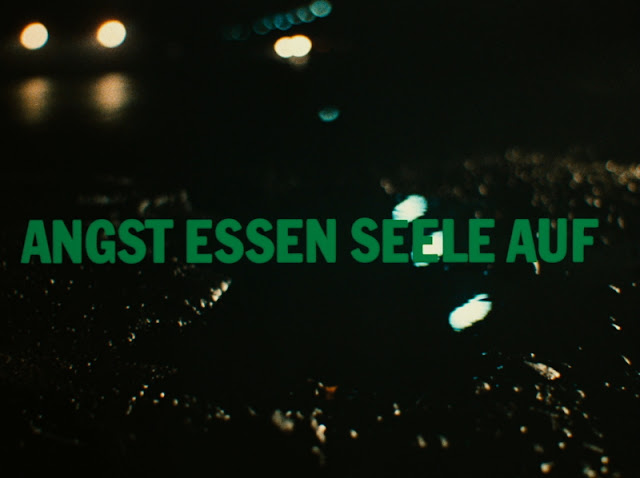 Like I said, I'm part of the way there.

It has come to my attention that Ali: Fear Eats the Soul is Rainer Werner Fassbinder's sort of tribute to the melodramas of Douglas Sirk, specifically the 1955 film All That Heaven Allows. I haven't seen it or any of Sirk's movies. Something I am inspired to change now that I've seen this and that, well, I know I should and that it would make my Mom proud, as Imitation of Life with Lana Turner is her favorite movie.

Anyway, Ali: Fear Eats the Soul or as the title translates from the German directly, "Fear Eat Soul Up" is a subtle and nicely simple film. Emmi (Brigitte Mira) decides to stop in the bar she passes on her walk home from work. It's raining out, and she's been curious about the exotic music she hears each night as she passes. She is plain, a bit heavy, in her sixties. She asks what the people usually have. Beer or cola. She orders a cola, delivered by a bitchy, buxom, blond bartender, who returns to the bar to a group of Arab gentlemen, including Ali (El Hedi ben Salem). He is Moroccan, tall, bearded, in his forties. 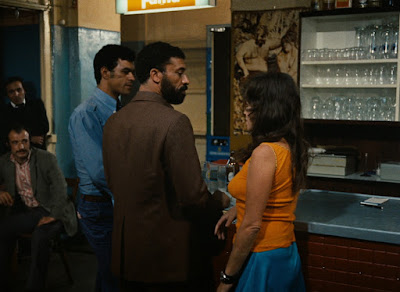 After a hilarious exchange with one of the barflies, seemingly a groupie to the Arab clientele in this particular Munich joint, in which Ali blows her off in the most honest way possible, she challenges him to ask the old lady to dance. And he does. She's all questions. He is too, in his broken German way. They end up at Emmi's apartment, where they talk, both happy to have someone to talk to, both kind. It gets late and Ali's place is far away. Emmi invites him to stay over. She has a spare room. He can't sleep. He goes to her room, in the film's first of many moments of beautiful tenderness, and she tells him to sit down. They talk some more. He puts his hand on her arm and gently strokes it.

Thus begins a romance that is at times believable and at times not so much. Precisely the point. This is a story much like, to name a movie I do know well, Harold and Maude (Dir. Hal Ashby, 1971), a story of an unlikely bond between two lonely people, a bond that looks straight in the face of what we think we know about attraction, age, love in general. It's a classic and timeless tale. In that aspect, Ali: Fear Eats the Soul fully works.

As the relationship between Emmi and Ali progresses further, outside influences, societal pressure begin to sneak in. Ali is an immigrant in an often intolerant West Germany. Emmi is a widower with three grown children, at least one grandchild. Ali's "Arab buddies" seem pretty cool with Emmi, but Ali's female admirers at the bar don't approve. Emmi's neighbors see this Arab guy hanging around. They question Emmy about it, call him "swine," try to force her to clean the stairway an extra time each month because of all his extra "dirt." Her work friends are nearly as vicious, shunning her at lunch time. Her grown children are not cool with it at all. It's so funny how adults act more like children than children when bigotry emerges. 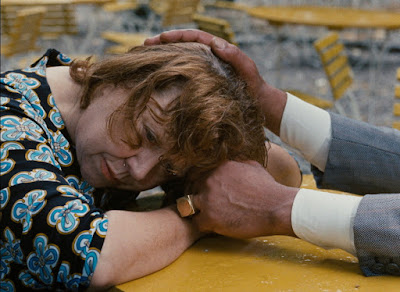 There are beautiful, quiet moments scattered all through this movie, scenes filled with inspired, simple dialogue, like the title of the film, for example, or "Why Heaven?" "Oh, just a fancy of mine." Ali and Emmi at the table, working out their budget. Emmi standing up to the bigoted grocer. Ali, calm and understanding, when faced with such. Emmi and Ali sitting alone in an empty outdoor dining area, lamenting about a time and place of their own, with no judgment. After a brief getaway, it's Ali who struggles with the differences between the two, seeking solace in the most likely of places.

But where so much of this movie does work, especially in the subtle performances of the two leads, there are times when it really doesn't. In fact, there are times when this movie just comes off as really bad, cheesy even, sometimes this happens right in the middle of something incredible. For example, the first introduction to Emmi's daughter, Krista (Irm Hermann) also introduces us to Fassbinder as an actor. Not good. Another scene, featuring the daughter and son-in-law, this time with the two older brothers, has this brilliant panning shot across the eye lines of the children as Ali is introduced. Then, a tantrum is thrown that would work if the sound was worth a crap. It was just too noticeable and distracting. 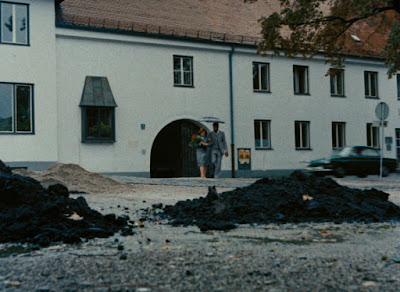 Fassbinder made this movie on the cheap (but not ridiculously cheap) apparently in between two bigger, more heavily financed movies. This is film director, who had already made a name for himself by 1974, having already directed over a dozen feature films and TV movies. This movie looks cheap. Why? It's just off-putting to me. Certain scenes look really good. Others don't. It distracted me. I know this movie could've and should've looked and sounded better. It felt like some of this movie was made with extreme love and care and other pieces were just haphazardly thrown together. Emmi and Ali and their story will not soon leave me, and I know that, but the disattention to detail, technically, does not a masterpiece make.

Am I missing something?