Another Thursday is upon us and another week of Wandering through the Shelves' Thursday Movie Picks.

This week, I'm going over to the dark side. I feel as if I've beaten the fun, teen movies to death. This time and with this category, I am doing the dark, brooding, even violent type. One angsty period piece, one political satire, one twisted mind-fuck, plus a bonus pick, a serious, hard-hitting, quiet masterpiece. None take place completely in a school building. But all of them feature brilliant scenes within high school gyms and auditoriums and hallways and classrooms, etc.

This post is meant to serve as a reminder that not all Movies Set in High Schools are about the fun, popular, pretty people, or even the nerd getting the girl. Sometimes they're about the opposite of all that. 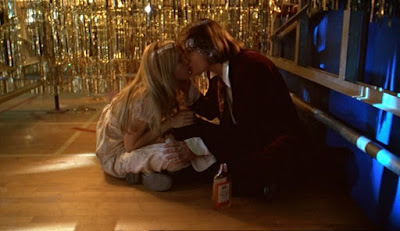 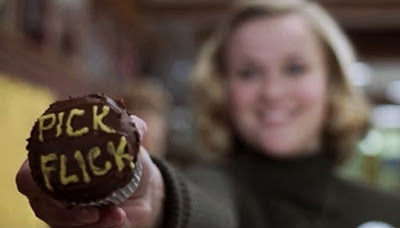 For these two picks, I will refer you to a post I did about these two films and their importance in my life as a teenager. Both dark, one comically tragic, one tragically comic.

What a crazy, twisted, badass piece of independent film this is. It's just plain cool. I adore it. I love time travel movies, teen movies of the 80s, killer soundtracks, and flashy camerawork (see the YouTube video below for an example of all this and why I love it.). This movie was made for me. I hate that its writer-director, Richard Kelly, could never reach the greatness he reached here. He sort of tried a couple times and just failed miserably. Jake Gyllenhaal kills in this movie, his first big role. You can see his great Lou Bloom budding in this title character. 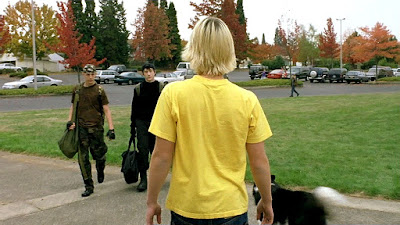 I saw this movie in a theater. It shook me to my core. Ballsy, deliberate, and truly horrifying cinema here. Gus Van Sant did some great stuff in the early aughts, especially here, the middle piece of his "Death Trilogy," which also contains the free-flowing, improvised tragedy Gerry (2002), starring Matt Damon and Casey Affleck, and Last Days (2005), a fictionalized account of the death of Kurt Cobain. All three of these films were shot by genius DP Harris Savides and all contain slow, long takes that truly add to the brooding nature of the stories being told, most notably in this one, the true masterpiece of the three, a story of a suburban, Anytown, USA, high school on the day of a Columbine-esque massacre.