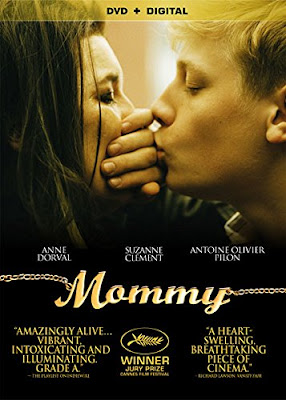 As the credits rolled behind the last shot of Xavier Dolan's 2014 film Mommy, I sat with a silent blank stare on my face. Usually, that is reserved for movies that strike me with complete awe upon ending. Not the case here. The ending of this movie sickeningly glorifies (it hadn't up to that point) the deplorable behavior of an extremely troubled adolescent. Some people aren't ready to be set free. This film knows that, gives us that (to great emotional effect), then takes it away. I was not in awe. I was taken aback.


Also confounding to me is how the movie starts by diminishing anything about the end of this movie to something of no real possibility. It starts with title cards telling us of a "fictional Canadian law" that allows parents to willingly admit their children to psychiatric facilities. Why? Why did we have to be told directly what's going to happen? When it does happen, it is presented in the most shockingly cinematic way possible. I wish I hadn't known anything about it in the beginning and was just left to assume that this is a movie and this sort of thing is possible in the world of this movie. I certainly wouldn't have thought anything about any "law" that may or may not exist.

The sad thing about these bothersome bookends is that what came to me during most of this movie is how extremely powerful it is on just about every level. I've read some harsh criticism of this film, most notably Dolan's use of pop music in a highly show-offy way. This doesn't bother me in the slightest. If I ever made a movie, I would want it littered with my favorite songs. Given the chance (and money), I would do exactly what Dolan did. I found the sequence of Steve (Antoine-Olivier Pilon) rapping with headphones on his "longboard", Counting Crows' "Colorblind" on top, to be one of the most stylistically unique and pleasant experiences I've had with a movie in a long time. 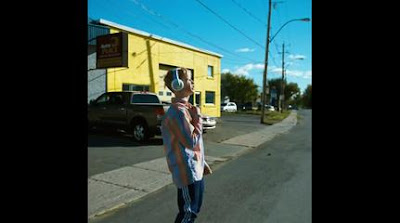 Mommy is filled with massive moments of cinematic perfection, most often in a small boxed-in frame. Dolan's also criticized decision, with cinematographer André Turpin, to shoot this film in that 1:1 aspect ratio worked perfectly for me. It does exactly what Dolan wanted it to do. It truly gives the audience this claustrophobic feeling, highlighting the emotional states of its three troubled leads.

These characters are, of course, Steve, a young teen with severely violent cases of ADHD, ODD, and certainly the anti-social behaviors that come along with said disorders. There's also the title Mommy character, a struggling widowed mother named Die (Anne Dorval), a woman who has lived hard in her latest years and exhibits a mania that makes it quite clear how far the apple has fallen, so to speak. Then, there is Kyla (Suzanne Clément), Die's neighbor from across the street, a woman who has faced an apparent tragedy (mostly unspoken of) and developed a stammer, who comes into this dysfunction and literally stares it in the face, becomes an unlikely helping hand to people who truly need it.

The performances, as most bloggers and critics have discussed at great length, are miraculous. I can't imagine what being on the set of this film might have been like. The scenes between Steve and Die are intensely challenging and perfect. When Steve goes fully violent on Die for the first time, we sit in shock as the reality of the situation overwhelms us. Then, later, a similar scene between Steve and Kyla flips that on its back, literally. Mommy, in this way, provides rushes of cinematic joy I've never experienced before. Dorval's performance, in particular, blows most recent Lead Actress Oscar-winning performances out of the water entirely. 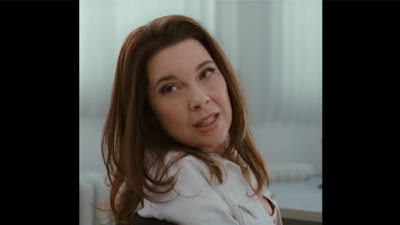 Who would've thought a stylistic device like a straight square aspect ratio would do the opposite of what me might think? And, during the few scenes where shot spreads into a traditional wide screen, the power of that which we, as movie lovers, take for granted, then becomes even more powerful. 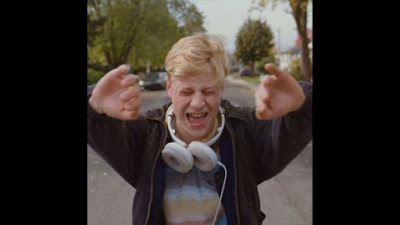 Mommy is a beautiful emotional experience all the way through. It says tremendous things about the mental states of people we actually know, no matter where in the world we live. I am no stranger to troubled teens (as a middle school teacher for the past six years, I've seen a thing or two) and Dolan's film confirms that these problems exist. He exposes certain truths that most people don't even like to think about. Die is not a good mother. Plain and simple. Steve has been given too much freedom and too much information about the world. (I didn't start openly cussing or drinking with my own mother until I was well out of high school.)

But what we're left with is a mother who loves her son and a son who loves his mother and a friend in Kyla who comes in seeking something she can't find in her own home. Kids like Steve exist in this world, and they come from these homes. Homes with unstable parents, usually a single mother, who doesn't know how to be a good parent beyond simply loving her child. When we first meet Die, she is picking Steve up from a youth detention center, where he is being expelled for severely injuring another boy. A counselor there looks at Die and says, "Love isn't enough...Unfortunately." The sad thing is that Die doesn't know another way. She can hardly take care of herself. Thus, society is left with Steves, lost young teens who may be too far gone to be found. 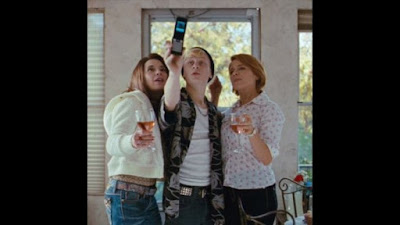 And that is precisely the reason the end of this film pisses me off so much. It diminishes Die to almost nothing and lets Steve off the hook. I am sure that was exactly what Dolan wanted to do, but that aspect of this otherwise beautiful piece of cinema didn't work and left me cold. Maybe I wanted something that doesn't exist. Maybe I'm too much of an optimist. Maybe I don't see it the way some others see it, specifically my buddy Drew over at A Fistful of Films, who loves this film with every ounce of his being. I can't fault him for that. It is a movie I will not soon, probably ever, forget. For that, it gets as high a rating from me as possible without that it didn't fully attain perfection in my eyes.

The problem is that I had hope for both Steve AND Die. Dolan starts to deliver that. Then decides not too.