Thursday is here. The first Thursday back to work for me. A new school year has arrived here in my little school district in East Tennessee, and I'll be back at it, teaching 8th graders to read and write.

I'll admit that I prefer science fiction of the non-alien kind (our topic a few weeks ago). This week on Wandering through the Shelves' Thursday Movie Picks, though, it's all about the aliens, Alien Invasions of Earth. A fun topic.

For a 12-year-old boy, there literally was no better blockbuster in 1996. My friends and I worshipped Will Smith and this movie. Independence Day is one of those movies that just did everything a good blockbuster should. It offers, most importantly, loads of humor to combat the truly evil nature of the aliens in question, their huge ships shrouding the world's major cities in darkness and destruction. I particularly love Jeff Goldblum and the dynamic with his father (Judd Hirsch), who, I just read, will both be returning for the sequel next year. I am truly stoked about it! 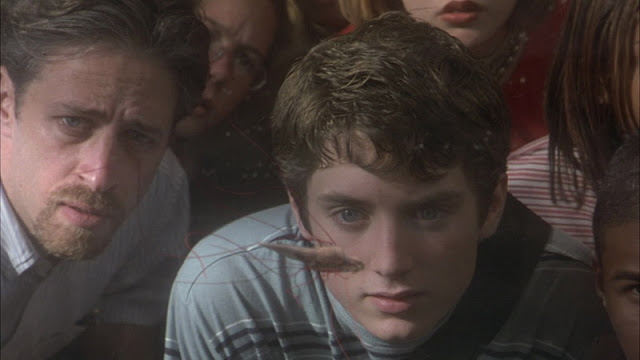 I was a high school freshmen, and, of course, my friends and I had our parents drop us off at the local multiplex for this one. I'm pretty sure everyone who came of age in the late 90s, as I did, have a soft spot for The Faculty. It's just a cool flick. Our high school teachers are turning into aliens, man, and what not. I just mentioned to my wife that I'd chosen this one for my picks this week, and she instantly said, "Oh, I love The Faculty!" And she hates alien movies. It worked as a brooding high school drama AND an effective sci-fi movie. Featuring a witty script from Kevin Williamson (fresh from his success with the first two Scream films and the new WB series Dawson's Creek), a stellar cast, and directed by the Texas mad genius himself, this movie stands as a classic piece of late-90s Miramax gold.

My uncle is a huge sci-fi buff and author, and he went out of his way to harp on how great this movie was when it came out last summer. I finally caught up with it earlier this year, and I loved it! Tom Cruise is badass as ever as a military spokesman pushed into the front lines of a war against aliens holding the ability to reset time and know the future. When he is somehow enabled with the ability to do the same, this movie turns into a action-packed, futuristic Groundhog Day. In order to save the world, he must train and fight side-by-side with a smokin' hot war hero played by Emily Blunt (OMG!). This movie is a ridiculous amount of fun.


The Aliens Can Be Nice, Too Bonus Pick

Spielberg's sci-fi masterpiece, his second blockbuster success in only three years, Close Encounters is one of those movies that worked so well for me in just how perfectly iconic it is. When I saw it for the first time, it was as if I'd seen it before. It was just, like, so right. Richard Dreyfuss plays Roy Neary, an electric company lineman who experiences an encounter with a U.F.O., which, in turn, drives him into an obsession with something he can't quite grasp. He starts to see visions of a familiar shape, builds it out of mashed potatoes, then mud and grass. He feels drawn to this place where something important is about to happen. I get chills just thinking about what that is, and how I feel when I watch this movie. All I know is that I like an alien invasion that is less killing and more music. Oh, and fucking Francois Truffaut is in this movie and is awesome. And so is Bob Balaban, and he's awesome. And everything about this movie is awesome. It is my third favorite movie of all-time. It will stay there, and never go away.