Thursday Movie Picks: All in the Family Edition - Stepfamilies

My parents got divorced when I was five years old. It sucked. My Dad got remarried very soon after, so my sister and I inherited a stepbrother and stepsister. My Mom, too, soon after began relationships with men who weren't my father. Weird stuff. When my Mom finally married for the second time, it was to a complete nutcase alcoholic, who, though never abusive, certainly gave me the creeps. It didn't last long. Good riddance.

It's hard on a kid growing up like that. Most of my best friends' parents were still married. Some still are today. I am hard-pressed to think of movies that suit my experience with stepfamilies. There just aren't very many. In fact, I've only seen one movie that got it totally right. You'll see that here. The other two picks are just movies with the prefix "step" in their titles that just happened to work for me in very unexpected ways.

This week on Wandering through the Shelves' Thursday Picks, it's an All in the Family Edition: Stepfamilies.

The feeling of getting a new stepmom, for me, was unlike anything to be found in this film. My new stepmom was not Julia Roberts. My family wasn't wealthy. I was older than the son character, Ben (Liam Aiken) and not a girl like Anna Harrison (Jena Malone). The thing that Chris Columbus' film does so well, though, is it evokes a familiar feeling. The feeling of being a kid forced to deal with things outside your control. As kids, we sort of feel the need to audition new people entering our lives, especially stepparents. The way Jackie (Susan Sarandon), the biological mother in this situation makes her kids the middle man is something so true to life. The way Isabel (Julia Roberts) tries at being cool, then tries at being tough, ultimately failing and then, alas succeeding, is likewise true. I was 14 when Stepmom came out. I was forced to go see it with my Mom and sister. My Dad had since divorced my stepmom. My Mom was just about to marry an asshole. And this movie just worked. I cried. I felt it.

Now, I have had two stepbrothers in my life. Neither are that still. I bonded with neither of them the way that Brennan Huff (Will Ferrell) and Dale Doback (John C. Reilly) do in Adam McKay's Step Brothers. Like his previous films with Will Ferrell (Anchorman and Talladega Nights), this is a film that just plain didn't work for me the first time. For all three of these films, it took a second watch. They are all three favorites now. The jokes have sit with you. You have to familiarize yourself with them, allow them to become quotable. And they so are. My wife still comments on how hard I laughed at this film when we watched it together (my second viewing). I still to this day laugh when I think about this one late scene in the film involving Will Ferrell as a lumberjack. "The fuckin' Catalina wine mixer..." I love this movie. And I love the journey Brennan and Dale make in becoming brothers. Mary Steenburgen and Richard Jenkins are great as the parents as well. Really great. 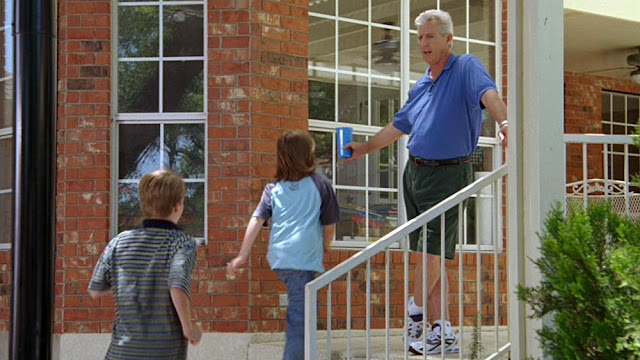 I'm pretty much with the majority on Richard Linklater's Boyhood. I won't put it on some pedestal with the greatest cinematic achievements of all-time or anything, but it's a solid emotional ride, one I likened to a roller coaster in my original review. A pretty obvious metaphor I suppose, but who cares!? Here's the truth of this film: No movie I have ever seen tapped in so purely to the feelings of being a young boy, missing your Dad, and seeing your mother marry a total and complete asshole. Mom (Patricia Arquette) marries two of them, one of them actually an abusive dirtbag drunk. I literally felt every bit of these scenes in this movie. I lived them in a way. This is the best this movie has to offer. It is just so real in the sense of recreating universal truths about parents and children and stepparents and how we all grow and change over the years. To watch the same actors age, specifically the Mom and Dad (Ethan Hawke) characters, is, to me, every bit as effective as everyone says. I pretty much hated the last half our of this movie, mostly because Mason (Ellar Coltrane) grew into a pretentious, artsy, hipster douche. But the first two hours...greatness!

Email ThisBlogThis!Share to TwitterShare to FacebookShare to Pinterest
Labels: All in the Family Edition, Boyhood, On a Thursday, Step Brother, Stepfamiles, Stepmom, Thursday Movie Picks